The Assumption of Moses 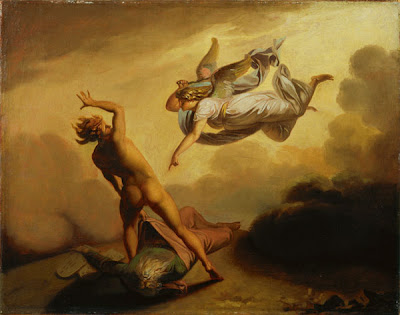 The Assumption of Moses (otherwise called the Testament of Moses) is a Jewish apocryphal pseudepigraphical work. It is known from a single sixth-century incomplete manuscript in Latin that was discovered by Antonio Ceriani in the Biblioteca Ambrosiana in Milan in the mid-nineteenth century and published by him in 1861.

The two titles of this manuscript are due to different identifications with lost texts. The Stichometry of Nicephorus and some other ancient lists refer to both a Testament of Moses and an Assumption of Moses, apparently as separate texts.

Ceriani, and recently Tromp with him, identified the manuscript with the Assumption of Moses (which is also called the Ascension of Moses) due to a match of verse 1:14 with a quotation included in the Historia Ecclesiastica of Gelasius of Cyzicus. This apocryphal work, entitled השמִ תריטפ in Hebrew, and ᾽Ανάληψις or ᾽Ανάβασις Μωυσέως in Greek, is also mentioned by other ancient writers, including Athanasius (in his Synopsis Sacræ Scripturæ) and Origen.

Charles, in his edition of 1897 suggests that the manuscript shall be identified with the Testament of Moses because the extant text does not describe any assumption of Moses to heaven, but simply contains the last exhortations of Moses (thus his testament). Charles furthermore suggests that these two separate texts were later united to form a single work.

Some ancient writers, including Gelasius (verse 2,21,17) and Origen (De principiis, III,2,1), cite the Assumption of Moses with reference to the dispute over the body of Moses, referred to in the Epistle of Jude 1:9, between the archangel Michael and Satan.

This dispute does not appear in Ceriani's manuscript; this could lend support to the identification of the manuscript with the Testament of Moses, but could also be explained by the text's incompleteness (it is believed that about a third of the text is missing).

An alternative explanation is that Jude is compounding material from three sources:
This explanation has in its favour three arguments:
The text is in twelve chapters and purports to be secret prophecies Moses revealed to Joshua before passing leadership of the Israelites to him.
Due to the vaticinia ex eventu, most scholars date the work to the early 1st century BC, contemporary with the latest historical figures it describes. Some others, however, do date it to the previous century and suggest that the 1st-century references in chapters six and ten were later insertions.

There are no theological peculiarities to help us attribute the text to any specific Jewish group. The main theme is the apocalyptic determinism of a history that unfolds according only to God's plan, regardless the acts of either the Israelites or the Gentiles. Another theme is the figure of Moses, who is shown as a mediator and intercessor between God and humanity.

Nice information, many thanks to the author.I agree with your thought.Thank you for your sharing.