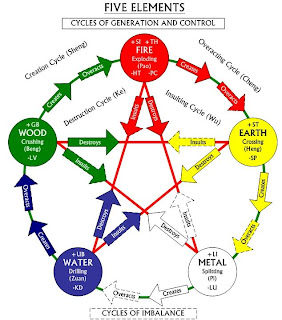 Note that the five elements are chiefly an ancient mnemonic device for systems with 5 stages; hence the preferred translation of "Phase" over "Element".

The elements are:The system of five phases was used for describing interactions and relationships between phenomena. It was employed as a device in many fields of early Chinese thought, including seemingly disparate fields such as geomancy or Feng shui, astrology, traditional Chinese medicine, music, military strategy and martial arts.

According to Wu Xing theory, the structure of the cosmos mirrors the five elements. Each "element" has a complex series of associations with different aspects of nature, as can be seen in the following table. In the ancient Chinese form of geomancy known as Feng Shui practitioners all based their art and system on the five elements. All of these elements are represented within the Bagua. Associated with these elements are colors, seasons and shapes; all of which are interacting with each other. 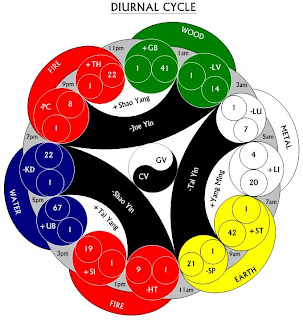 Based on a particular directional energy flow from one element to the next, the interaction can be expansive, destructive, or exhaustive. With proper knowledge of such aspect of energy flow will enable the Feng Shui practitioner to apply certain cures or rearrangement of energy in a beneficial way.

The interdependence of organ networks in the body was noted to be a circle of five things, and so mapped by the Chinese doctors onto the five phases. For instance, the Liver (Wood phase) is said to be the "mother" of the heart (Fire phase), and the Kidneys (Water phase) the mother of the Liver. The key observation was things like kidney deficiency affecting the function of the liver. In this case, the "mother" is weak, and cannot support the child. However, the Kidneys control the heart along the Ke cycle, so the Kidneys are said to restrain the heart. Many of these interactions can nowadays be linked to known physiological pathways (such as Kidney pH affecting heart activity).

The key thing to keep in mind with the Chinese medical application of the five elements is that it is only a model, and it is known to have exceptions. However, in general the device seems to be useful for arriving at good clinical results, so they were kept by the critically thinking Chinese medical doctors and researchers since they were first introduced.

The citation order of the Five Phases, i.e., the order in which they are cited in the Bo Hu Tong and other Han dynasty texts, is Metal, Wood, Water, Fire, and Earth. The organs are most effectively treated, according to theory, in the following four-hour periods throughout the day, beginning with the 3 a.m. to 7 a. m. period: Metal organs (see the list below), Earth organs, Fire1 organs, Water organs, Fire2 (the "non-empirical" Pericardium and Triple Burner organs), and Wood organs, which is the reverse of the citation order (plus an extra use of Fire and the non-empirical organs to take care of the sixth four-hour period of the day). These two orders are further related to the sequence of the planets going outward from the sun (Mercury, Venus, Mars, Jupiter, Saturn, or Water, Metal, Fire, Wood, and Earth) by a star diagram.