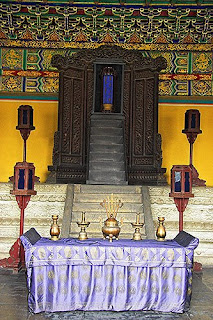 Rome, politically ruling the world, was longing for a sacred King, for a Prince of Peace, who should come from the East and bring to the people some higher and truer happiness than that deceiving chimera of political bigness. Well, Christ should be this universal, sacred King, this Prince of Peace, and Messenger of a durable happiness. It is not true that Christ had His prophets among the people of Israel only. His prophets existed in every race and every religion and philosophy of old. That is the reason why the whole world could claim Christ, and how He can be preached to everybody and accepted by everybody. Behold, He was at home everywhere!
at 13:14

you should specify that you added that bit about Hwang-Cheon-Sang-Je in, as it is not originally in St. Nikolai's treatise.