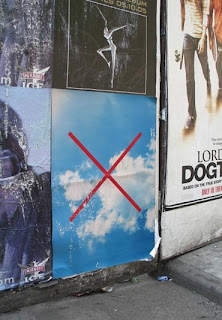 Ha! Kill the Buddha, or the Buddha kills you. Either way, somebody's gonna get whacked.

I am not sure if that is profoundly deep, or just sarcastic?

I really like your blog! It is so interesting to read your writings about how people think.

Please check out my blog! I started a new blog a few days ago. My daily updated blog is about my life as an expat Chinese girl in Sweden, medical student in Stockholm and young mother to a little mixed race Chinese/Swedish baby girl. I have both "today's outfit" and "today's reflection" on my blog. I also write about health and exercise, science, medicine and how we can help people in need. Ask me any question about health and medicine and I will get you a good answer within a couple of days in my blog (using my knowledge, medical literature and my relations to doctors and scientists). Visit my blog and write a comment about anything!

I really want people in all countries to get to know my forum for discussing health and medicine, because knowledge is king! I especially want to reach people in poor Asian countries, because I want to start a health company in China in the future. Please tell people you know about my blog and tell them to ask me questions about health! One reader just asked me a question about good exercising forms during and after pregnancy. So I published a long article about it on the blog yesterday (2009-06-05).

Please notify me if you have ideas about how I can let more people know about my blog. I would be really happy if you can help me spread the message about my blog to as many as you can! In order for me to get money from ads in the future, I need to reach 5000 shows of my blog before the 25th of June. Only one click per day and computer is counted. I want to give away the money I get from my blog to charity. I support a little poor Chinese village with money to help the people there with schools and medical care. Please let people know about my blog and we can help the poor people more!

I would be really happy if you would give me a link on your nice blog! The URL to my blog is:

(NOT MY GOOGLE BLOG!)