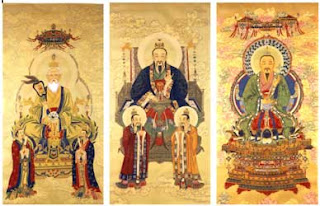 The third eye (also known as the inner eye) is a mystical and esoteric concept referring in part to the ajna (brow) chakra in certain Eastern and Western spiritual traditions. It is also spoken of as the gate that leads within to inner realms and spaces of higher consciousness. In New Age spirituality, the third eye may alternately symbolize a state of enlightenment or the evocation of mental images having deeply-personal spiritual or psychological significance. The third eye is often associated with visions, clairvoyance (which includes the ability to observe chakras and auras), precognition, and out-of-body experiences, and people who have allegedly developed the capacity to utilize their third eyes are sometimes known as seers.
In Hinduism and Buddhism, the third eye is a symbol of enlightenment. In the Indian tradition, it is referred to as the gyananakashu, the eye of knowledge, which is the seat of the 'teacher inside' or antar-guru. The third eye is the ajna chakra (sixth chakra) also known as brow chakra or brow centre. This is commonly denoted in Indian and East Asian iconography with a dot, eye or mark on the forehead of deities or enlightened beings, such as Shiva, the Buddha, or any number of yogis, sages and bodhisattvas. This symbol is called the "Third Eye" or "Eye of Wisdom", or, in Buddhism, the urna. In Hinduism, it is believed that the opening of Shiva's third eye causes the eventual destruction of the physical universe.

Many Hindus wear a tilak between the eyebrows to represent the third eye.

In the Upanishads, a human being is likened to a city with ten gates. Nine gates (eyes, nostrils, ears, mouth, urethra, anus) lead outside to the sensory world. The third eye is the tenth gate and leads to inner realms housing myriad spaces of consciousness.

According to Max Heindel's Rosicrucian writings, called Western Wisdom Teachings, the third eye is localized in the pituitary body and the pineal gland. It was said that in the far past, when man was in touch with the inner worlds, these organs were his means of ingress thereto, and they will again serve that purpose at a later stage. According to this view, they were connected with the involuntary or sympathetic nervous system and to regain contact with the inner worlds (to reawaken the pituitary body and the pineal gland) it is necessary to establish the connection of the pineal gland and the pituitary body with the cerebrospinal nervous system. It was said that when that is accomplished, man will again possess the faculty of perception in the higher worlds (i.e. clairvoyance), but on a grander scale than it was in the distant past, because it will be in connection with the voluntary nervous system and therefore under the control of his will.

According to the gnostic teachings of Samael Aun Weor, the third eye is referenced symbolically and functionally several times in the Christian Bible's Book of Revelation, which as a whole is seen as a work describing Kundalini and its progression upwards through three and a half turns and seven chakras. This interpretation equates the third eye with the sixth of the seven churches of Asia detailed therein, the Church of Philadelphia.

In terms of Jewish Kabbalah, the Ajna chakra is attributed to the sphere of Chokmah, or Wisdom, although others regard the third eye as corresponding to the non-emanated sephirah of da'ath (knowledge).

In Taoism and many traditional Chinese religious sects such as "chan", "third eye training" involves focusing attention on the point between the eyebrows with the eyes closed in various qigong postures. The goal of this training is to allow students to have the ability in tuning into right vibration of the universe and gain solid foundation into more advanced meditation levels.

Some writers and researchers, including H. P. Blavatsky and Rick Strassman, have suggested that the third eye is in fact the partially dormant pineal gland, which resides between the two hemispheres of the brain. The pineal gland is said to secrete dimethyltryptamine (DMT) which induces dreams, near-death experiences, meditation, or hallucinations. Various types of lower vertebrates, such as reptiles and amphibians, can actually sense light via a third parietal eye—a structure associated with the pineal gland—which serves to regulate their circadian rhythms, and for navigation, as it can sense the polarization of light.

Three Eyed characters commonly appear in fictions and folklores of Asian cultures. Some of these characters, belong to the so-called "Three Eyed Race", and possess supernatural powers: