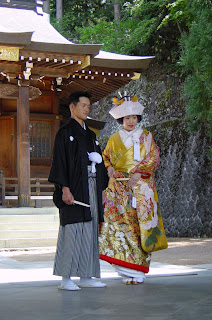 There are many religions in Japan that have come along with current times but most follow Shintō or Buddhism. Most Japanese people do not identify as exclusively belonging to just one religion, but incorporate features of both religions into their daily lives in a process known as syncretism. Shinto and Buddhism are even taken to as being interwoven in the country. Japanese streets are decorated on Tanabata (七夕, meaning "Evening of the seventh"), a Japanese star festival, derived from the Chinese star festival, Qi Xi (七夕 "The Night of Sevens"), Obon (お盆) or just Bon (盆), a Japanese Buddhist custom to honor the departed (deceased) spirits of one's ancestors, and Christmas, an annual Christian holiday commemorating the birth of Jesus Christ. Japan grants religious freedom to all sects of religious people, as evidenced by the fact they allow minority religions like Christianity, Islam and Sikhism to be practiced. According to the CIA World Factbook 84% to 96% adhere to Shinto and Buddhism while 4% to 16% of the demographic population adhere to other religions or non-religious, atheist groups. However, such high numbers come primarily from birth records, following a longstanding practice of family lines being officially associated with a local Buddhist temple and not the people truly following the religion. The majority of Japanese carry on the roles of one or more religious body, but do not consider themselves believers in one particular religion, but are syncretistic.

Most Japanese participate in rituals and customs derived from several religious traditions. Life cycle events are often marked by visits to a Shintō shrine. The birth of a new baby is celebrated with a formal shrine visit at the age of about one month, as are the third, fifth, and seventh birthdays and the official beginning of adulthood at age twenty. Wedding ceremonies are often performed by Shinto priests, but Christian weddings (or howaito uedingu "white wedding" in Japanese) are also popular. In the early 1980s, more than 8% of weddings were held in a shrine or temple, and nearly 4% were held in a church. The most popular place for a wedding ceremony—chosen by 41%—was a wedding hall. These days most Japanese weddings are Christian style, using liturgy but not always with an ordained priest.

Japanese Funerals are usually performed by Buddhist priests, and Buddhist rites are also common on death day anniversaries of deceased family members. Some Japanese do not perform ancestral ceremonies at all, and some do so rather mechanically and awkwardly. But there have also been changes in these practices, such as more personal and private ceremonies and women honoring their own as well as their husbands' ancestors, that make them more meaningful to contemporary participants.

There are two categories of holidays in Japan: matsuri (festivals), which are largely of Shinto origin and relate to the cultivation of rice and the spiritual well-being of the local community, and nenjyuu gyouji (annual events), mainly of Chinese or Buddhist origin. The matsuri were supplemented during the Heian period with more festivals added and were organized into a formal calendar. In addition to the complementary nature of the different holidays, there were later accretions during the feudal period. Very few matsuri or nencho gyo are national holidays, but they are included in the national calendar of annual events. Most matsuri are local events that follow local traditions, and vary from place to place.

Most holidays are secular in nature, but the two most significant for the majority of Japanese--New Year's Day for Shinto believers and Obon for Buddhists, which marks the end of the ancestors' annual visit to their earthly home—involve visits to Shintō shrines or Buddhist temples. The New Year's holiday (January 1–3) is marked by the practice of numerous customs and the consumption of special foods. These customs include time for getting together with family and friends, for special television programming, and for visiting Shintō shrines to pray for family blessings in the coming year. Dressing in a kimono, hanging out special decorations, eating noodles on New Year's Eve to show continuity into the new year, and playing a poetry card game are among the more "traditional" practices. During Obon season, in mid-July or mid-August, bon (spirit altars) are set up in front of Buddhist family altars, which, along with ancestral graves, are cleaned in anticipation of the return of the spirits. As with the New Year's holiday, people living away from their family homes return for visits with relatives. Celebrations include folk dancing and prayers at the Buddhist temple as well as family rituals in the home. Many Japanese also participate, at least as spectators, in one of the many local matsuri celebrated throughout the country. Matsuri may be sponsored by schools, towns, or other groups but are most often associated with Shintō shrines.
at 02:27