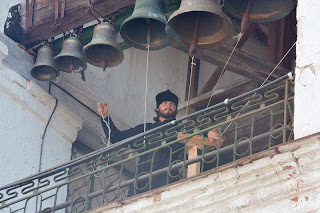 The ringing of bells is one of the most essential elements of an Orthodox church. Church bells are rung to:


The use of bells is not only practical, but is also considered to be spiritual. Bells are sometimes referred to as "singing icons", because they establish the acoustic space of an Orthodox temple just as painted icons and hymnography define its visual and noetic space, respectively.

There are several liturgical services which point out the importance of bells in the Russian Orthodox Church: Blessing the Foundation of a New Bell Tower, Blessing a New Bell Tower (after construction is completed), Blessing, Naming, and Chrismating a Bell. There is also a service for the blessing of a bell ringer.

Bells are blessed with a ritual containing many of the elements of the Rite of Baptism. The new bell is blessed with holy water and censed, both outside and inside, and the priest lays hands on the bell to bless it. During the rite, the bell is "named" (that is, consecrated in honour of a saint, whose icon has often been molded into the side of the bell when it was cast at the foundry—but though a bell may be called the "Gabriel" bell, it would never be called the "St. Gabriel" bell, because a bell is not a saint).

The bell is also anointed with chrism, just as an Orthodox Christian is at chrismation. The theological understanding of bells as "weapons" in spiritual warfare, and their role in the Christian life is emphasized during the rite by the scripture lesson from Numbers 10:1-10:


"And the Lord spoke to Moses, saying: Make for yourself two silver trumpets … And they shall be for you for the calling of the assembly … When you sound an alarm … And if you shall go forth to war … And in the days of your rejoicing …"

The use of bells is symbolic of the proclamation of the Gospel. Sometimes Orthodox churches and monasteries will combine the use of bells with the striking of a wooden or metal semantron, with the semantron being sounded first, then the bells being rung later. The quieter and simpler sound of the semantron is understood to symbolize the Old Testament prophets, for it is the symbol only of a coming event, whereas the ringing of the bells is spread far into the air symbolizing the annunciation of the Gospel throughout the world.

After the conversion of Russia

to Christianity in the 10th century, bells came gradually into use everywhere. Originally, a flat piece of wood or metal called a semantron would be beaten rhythmically with a mallot to summon the faithful to services. This was especially true in monasteries, some of which still to this day use both semantrons and bells.

was inherited from Greece, the use of church bells was imported into Russia from Western Europe. The Russian word for bell is kolokol, which comes from the German word glocke, derived from the Latin clocca, which in turn appears to come from the Irish clog. The word for bell in Church Slavonic is kampan, which is derived from Latin campana. During the fifteenth century the semantron began to be gradually replaced by bells. At that time, several foundries for bell making were established in Russia. Russian church bells are commonly cast using a mixture of bronze and tin, often with silver added to the bell metal, to produce their unique sonority and resonance. Russian bells also tend to differ from Western bells in the proportion of their height to width, and the method of varying the thickness of the walls of the bell. The clapper ("tongue") of the bell also follows a different design that that used in the West.

The art of bellfounding reached its pinnacle in the 18th century, with the production of unimaginably huge bells. The largest bell in the world, the Tsar Bell (218 tons) was cast in 1733 for the Ivan the Great Bell Tower in Moscow. Unfortunately, the Tsar Bell was damaged in a fire in 1737 before it could be successfully hung, and stands today at the base of the tower. The largest working bell in the world is the Dormition Bell (144,000 lb) which hangs in the same Ivan the Great Bell Tower.

Technically, bells in Russian tradition are rung exclusively by tolling (i.e, moving only the clapper so that it strikes the side of the bell) and never by pealing (swinging the entire bell until it sounds); however, the terms are often used interchangeably in written sources. For tolling bells a special complex system of ropes is developed and used individually for every belltower. All the ropes are gathered at approximately one point, where the bell-ringer (zvonar) stands. Some ropes (the smaller ones) are played by hand, the bigger ropes are played by foot. The major part of the ropes (usually - all ropes) are not actually pulled, but rather pressed. Since one end of every rope is fixed, and the ropes are kept in tension, a press or even a punch on a rope makes a clapper strike the side of its bell.

No melody is employed, as in the Western carillon, but rather a complicated polyrhythmical sequence of sounds is produced. "The foundation of Orthodox bell ringing lies not in melody but in rhythm, with its intrinsic dynamic, and in the interaction of the timbres of various bells." These sequences have a very special harmony, since Russian bells (unlike Western European ones) are not tuned to a single note. Western bells usually have an octave between the loudest upper tone ("ring") and the loudest lower tone ("hum"). Russian bells have a seventh between these sounds. Generally, a good Russian bell is tuned to produce a whole scale of sounds (up to several dozen of them). This effect is accomplished both by the composition of the alloy from which the bell is cast and the sculpting of the sides of the bell in the mold.

To understand the Russian Orthodox method of bell ringing, it is necessary to recognize a few items of terminology. The bells in an Orthodox bell tower (zvonnitsa) are organized into three groups:


Within each of these three groups there may be several bells of varying size, all within the general range of the group. The larger the bell, the deeper its voice.

A zvon is a toll on any bell or bells. A zvonar is a bell ringer. In the Orthodox church, this is a tonsured (clerical) position, and there is a distinct service of the "Setting Apart of a Bell Ringer". The use of electric bells is forbidden in the Orthodox Church, because it is a sacred function, and may only be performed by a member of the church. Before he goes into the belltower, the zvonar will go to the priest (or the igumen if it is a monastery) for a blessing to ring the bells.

Different ringing is used at different moments of the service (before the service, during the most essential parts of the All-Night Vigil or Divine Liturgy, while the departed is being carried to the cemetery, etc.). Four kinds of canonical tolls are distinguished, which, rung separately or in combination, comprise all the diversity of Orthodox bell-ringing: Blagovest, Perebor, Perezvon, and Trezvon.

The blagovest is the measured striking of a single large bell (called the blagovestnik). Blagovest means "annunciation", or "good news" because with this ringing the believers are notified that the divine service is about to begin in the church.

As a separate toll before the beginning of a divine service, the blagovest commences with three slow strokes (i.e., with rather long pauses between), and thereafter continues with more frequent, measured strokes, sometimes ending with three more slow strokes. According to the Typikon, the blagovest should last for as long as it takes read through Psalm 118 (Septuagint; KJV: Psalm 119) once, or Psalm 50 (KJV: Psalm 51) twelve times.

Depending on the type of the divine service, the blagovest is classified as "regular" (obyknovenny, i.e., fast and often accomplished by swinging the clapper to both sides of the bell), or "Lenten" (postny, i.e., slow, and on only one side of the bell). On Great Feasts the blagovest is tolled on the largest blagovestnik in the tower and the toll as a rule is faster, louder, and longer.

Besides the normal blagovest, in Orthodox ringing there is another, named “tidal” (valovoy) or "great" (bolshoi), when strokes on the largest blagovestnik are mixed with tolls on another blagovestnik.
The Blagovest can be sounded on different bells, depending on whether the day. Large bell towers typically have five Blagovestniki (ranged from larger to smaller):


The Perebor is the funeral zvon. Each individual bell is struck once, from the smallest to the largest, in a slow, steady peal. After that, all of the bells are struck together at the same time. Striking the bells from the smallest to the largest symbolizes the stages of a person’s life from birth to death; the final striking of all the bells together symbolizes the end of earthly life. During the perebor, each stroke of a bell should not be made until the sound of the previous bell has died away. The perebor may be repeated as many times as necessary, and is tolled as the body of the deceased is carried from the temple (church building) to the grave.

The Perezvon (Russian: Перезвон) is the striking of each of the bells, once or several times, from largest to the smallest, with a final stroke on all at once. The pattern may be repeated many times, but the final stroke on all bells is made only at the very end.

This peal symbolizes what the Orthodox Church holds to be the kenosis (self-emptying) of God the Son when he became incarnate (Phillippians 2:7-8), and is sounded only twice a year, on Great Friday and Great Saturday during those moments which recount Jesus' death on the cross and his burial.

The Trezvon (triple-peal) is the rhythmical ringing of multiple bells, using all the major groups of the bell scale. The trezvon is the most joyous of the various types of rings. The order of ringing the different bells is not fixed, but may be composed by the bell-ringer himself and prompted by his creativity and self-expression. For the trezvon, the elaborate pattern is repeated three times, with a short pause between each repetition. All three groups of bells participate in the trezvon (soprano, also, bass), and each group has its own part in the peal. Traditionally, the tempo for a trezvon is 3/4 or 4/4. The largest bell which can participate in it is the blagovestnik which was used to ring the blagovest for the given service, or a smaller bell, but not a larger one.
The trezvon is usually rung in three stages: the beginning, the zvon itself, and the finale. The beginning usually consists of three slow tolls on the blagovestnik for that day, symbolizing the Holy Trinity. The main part of the trezvon, the zvon, is often performed in several movements— one, two, or three, often called “verses”— each of which is finished with one, two, or three chords (formed by striking several select bells at once), corresponding to the number of verses. Each movement might have its own particular rhythm, dynamic, and composition. The trezvon is usually finished with three chords. The length of the trezvon is normally the length of the time it takes to read of Psalm 50; but on more festive occasions it should be longer.

The Dvuzvon (double-peal) is the same as a Trezvon, except the pattern is repeated only twice instead of three times.

The above types of zvons may be combined and rung at particular times during the same service, or used exclusively on certain occasions. The following are general guidelines, and cannot accommodate the full richness and diversity of the Russian Orthodox Church. There are also variations in local tradition.
at 05:25