Our Lady of Sheshan, China 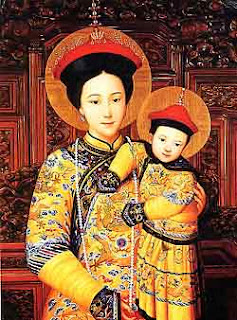 Our Lady of China (Simplified Chinese: 中华圣母, Traditional Chinese: 中華聖母, pinyin: Zhōnghuá Shèngmǔ) is the name given to an apparition of the Blessed Virgin Mary in Donglu, China, first appearing in 1900.

An officially-sanctioned image of Our Lady of China was blessed, granted and promulgated by Pope Pius XI in 1928, in response to the requests made by the 1924 Shanghai Synod of Bishops in China, the first national conference of bishops in the country. Following the event, Archbishop Celso Costantini(剛恆毅), Apostolic Delegate in China, along with all the bishops of China, declared the Chinese people dedicated to Our Lady of China, using the official image. In 1941, Pope Pius XII designated the feast day as an official feast of the Catholic liturgical calendar. In 1973, following the Second Vatican Council, the Chinese Bishops conference, upon approval from the Holy See, placed the feast day on the vigil (day preceding) of Mothers Day (the second Sunday of May). Christian devotion to Our Lady of China has been popular in Donglu.

Several churches, chapels, and pastoral centers around the world, predominantly those focused on ministry to Chinese-speaking Catholics, have adopted the name, including a mission in Washington, DC. There is a mosaic of Our Lady of China in the National Shrine of the United States in Washington, DC, established and dedicated in 2002 under the Most Rev. Michael J. Bransfield. There has been some controversy because the image used in the Chapel is not the officially approved image of Our Lady of China, but instead uses the image of Our Lady of China and Baby Jesus painted by John Lu Hung Nien. The late Cardinal Thomas Tien Keng-Hsin, the first Chinese Cardinal, used this image for the prayer card for the persecuted in China, which was widely promoted in the U.S.A. and Canada. Critics have accused John Lu Hung Nien's image of the Virgin Mary, of resembling the Buddhist bodhisattva Guan Yin.

The Our Lady of Sheshan is another, similar apparition which has attained like acclamation and fame among Chinese Christians.

The She Shan Basilica (officially: Basilica of Our Lady of SheShan, simplified Chinese: 佘山进教之佑圣母大殿; pinyin: Shéshān jìnjiào zhī yòu shèngmǔ dàdiàn) is a Catholic church in Shanghai, China. The name comes from its location on the western peak of She Shan Hill, located in Songjiang District, to the west of Shanghai's metropolitan area and was at one time the destination of pilgrims from across Asia.

The official name of the church is the Church of the Holy Mother in China. The first church on She Shan hill was built in 1863. During the Taiping Rebellion, Jesuit missionaries bought a plot of land on the southern slopes of the hill. A derelict Buddhist monastery had stood on the site. The remaining buildings were demolished, and a small building was constructed as living quarters for missionaries, and a small chapel. At the peak of the hill (where the Maitreya hall had stood), a small pavilion was built in which was placed a statue of the Madonna.

In June 1870, unrest in Tianjin led to the burning of churches there. The Shanghai Jesuits prayed at the statue of the Madonna and pledged to build a church to her honour in return for her protection. Subsequently, construction of the church began. Wood was shipped in from Shanghai, and stone bought from Fujian. All material had to be ported to the peak by hand. The church was completed two years later. This first church was in the form of a cross, and incorporated features of both Chinese and Western architectural features. A veranda was placed outside the door, with ten columns. Eight stone lions were placed before the church. In 1894, several ancillary buildings were added. These included a chapel half-way down the hill, a shrine to the Sacred Heart, the Virgin Mary, and St. Joseph. Fourteen Stations of the Cross were constructed along the path to the church.

In 1925, the existing church was found to be inadequate, and it lagged far behind other churches in Shanghai in terms of size and ornamentation. The church was demolished and rebuilt. Because the Portuguese priest and architect (叶肇昌) was very stringent about the quality of construction, the whole project took ten years to finish, and the church was completed in 1935.
In 1942, Pope Pius XII ordained the She Shan Cathedral a minor Basilica. In 1946, the Holy See crowned the statue of Our Lady of Zose (Zose being the Shanghainese pronunciation of She Shan) at the apex of the tower.

After the Communist takeover in 1949, She Shan Cathedral was heavily damaged during the Cultural Revolution. The stained glass windows of the church, carvings along the Via Dolorosa, the statue atop the bell tower, and various other works of iconography were destroyed.

In 1874, Pope Pius IX declared that pilgrims who went to She Shan in May (traditionally a Marian month) would receive a Plenary Indulgence. As a result, pilgrims from all over China began to congregate at She Shan in May, a practice that continues to this day.

Every May, the church becomes the destination for pilgrims who travel far and wide to make their annual pilgrimage at She Shan, praying the Way of the Cross, the Rosary and attending Mass at this holy site. Traditionally, many of the Catholics in the area were fishermen, who would make the pilgrimage by boat. This tradition continues among local Catholics, with the result that the creeks around She Shan are often crowded with boats in May.

Currently, She Shan is the only active pilgrimage site for Roman Catholics in China.

After the Cultural Revolution ended, the damage was gradually repaired. The statue was initially replaced with a simple iron cross, and a replacement statue was installed in 2000.

On May 24, 2008 Pope Benedict XVI announced that he had composed a special prayer for Our Lady of Sheshan.

The thirst for God in China is immense and the population is now nauseated by materialism. Mutual love can give birth to abundant fruit for mission.
at 06:30

Nice article! It really is a very valuable and knowledgeable article. I like the way you have defined the process. Thanks