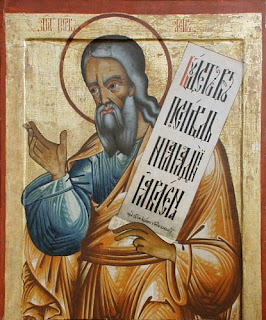 Isaiah (Hebrew: יְשַׁעְיָהוּ, Yeshayah;u Tiberian Yəšạʻyā́hû ; Greek: Ἠσαΐας, Ēsaïās ; Aramaic/Syriac/Assyrian: Isha`ya ; Arabic: أشعیاء‎, Ašʿiyāʾ ; "Yahweh is salvation") lived approximately 2700 years ago and was a prophet in the 8th-century BC Kingdom of Judah. Part of his message was: "The land will be completely laid waste and totally plundered. The LORD has spoken this word." (Isaiah 24:3). Isaiah therefore warns the people of Israel to turn back to Yahweh. Isaiah was sensitive to the common people's problems and was very outspoken regarding their treatment by the aristocracy.

Jews and Christians consider the Book of Isaiah a part of their Biblical canon; he is the first listed (although not the earliest) of the neviim akharonim, the later prophets. The Catholic Church regards Isaiah as a saint, and most Christians believe that Isaiah prophesied the coming of Jesus Christ (Isaiah 7:14, the King James version


"Behold, a virgin shall conceive, and bear a son, and shall call his name Immanuel. (Being interpreted "God with us")

Many of the New Testament

teachings of Jesus refer to the book of Isaiah.

Saint Gregory of Nyssa (c.335-395), believes that the Prophet Esaias (Isaiah) "knew more perfectly than all others the mystery of the religion of the Gospel." Blessed Jerome (c.342-420) also lauds the Prophet Esias, saying, "He was more of an Evangelist than a Prophet, because he described all of the Mysteries of the Church of Christ so vividly that you would assume he was not prophesying about the future, but rather was composing a history of past events."

Isaiah prophesied during the reigns of Uzziah (or Azariah), Jotham, Ahaz, and Hezekiah (1:1), the kings of Judah. Uzziah reigned fifty-two years in the middle of the 8th century BC, and Isaiah must have begun his career a few years before Uzziah's death, probably in the 740s BC. He was married, and his wife was probably also a prophet; the interpretation of "prophetess" in Isaiah 8.3 as simply an honorary title, "Mrs. Prophet" as it were, is likely. They had two sons, naming one Jasub, meaning "A remnant shall return" and the younger, Maher-Shalal-Hash-Baz, meaning, "Spoil quickly, plunder speedily." Isaiah lived till the fourteenth year of Hezekiah (who died 698 BC), and may have been contemporary for some years with Manasseh. Thus Isaiah may have prophesied for the long period of at least forty-four years.

In early youth, Isaiah may have been moved by the invasion of Israel by the Assyrian monarch Tiglath-Pileser III (2 Kings 15:19); and again, twenty years later, when he had already entered on his office, by the invasion of Tiglath-Pileser and his career of conquest. Ahaz, king of Judah, at this crisis refused to co-operate with the kings of Israel and Syria in opposition to the Assyrians, and was on that account attacked and defeated by Rezin of Damascus and Pekah of Israel

Soon after this Shalmaneser V determined wholly to subdue the kingdom of Israel, Samaria was taken and destroyed (722 BC). So long as Ahaz reigned, the kingdom of Judah was unmolested by the Assyrian power; but on his accession to the throne, Hezekiah, who was encouraged to rebel "against the king of Assyria" (2 Kings 18:7), entered into an alliance with the king of Egypt (Isaiah 30:2-4). This led the king of Assyria to threaten the king of Judah, and at length to invade the land. Sennacherib (701 BC) led a powerful army into Judah. Hezekiah was reduced to despair, and submitted to the Assyrians (2 Kings 18:14-16). But after a brief interval war broke out again, and again Sennacherib led an army into Judah, one detachment of which threatened Jerusalem (Isaiah 36:2-22; 37:8). Isaiah on that occasion encouraged Hezekiah to resist the Assyrians (37:1-7), whereupon Sennacherib sent a threatening letter to Hezekiah, which he "spread before the LORD" (37:14).


Then Isaiah son of Amoz sent a message to Hezekiah: This is what the Lord, the God of Israel, says: Because you have prayed to me concerning Sennacherib king of Assyria,
this is the word the Lord has spoken against him: The Virgin Daughter of Zion

despises and mocks you. The Daughter of Jerusalem tosses her head as you flee.
Who is it you have insulted and blasphemed? Against whom have you raised your voice and lifted your eyes in pride? Against the Holy One of Israel!

According to the account in Kings (and its derivative account in Chronicles) the judgment of God now fell on the Assyrian army and wiped out 180,000 of its men. "Like Xerxes in Greece

, Sennacherib never recovered from the shock of the disaster in Judah. He made no more expeditions against either southern Palestine or Egypt."

The remaining years of Hezekiah's reign were peaceful (2 Chr 32:23-29). Isaiah probably lived to its close, and possibly into the reign of Manasseh, but the time and manner of his death are not specified in either the Bible or recorded history. There is a tradition (reported in both the Martyrdom of Isaiah

and the Lives of the Prophets

) that he suffered martyrdom by Manasseh due to pagan reaction.

According to the Rabbinic literature, Isaiah was a descendant of the imperial house of Judah and Tamar (Sotah

10b). He was the son of the prophet Amos, who was the brother of King Amessias or Amaziah (796-767 BC) of Judah. (Talmud tractate Megillah