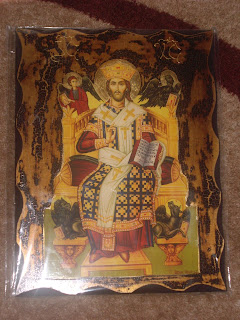 The great-grandmother of Jesus was a woman named Ismeria, according to Florentine medieval manuscripts analyzed by a historian.

The legend of St. Ismeria, presented in the current Journal of Medieval History

, sheds light on both the Biblical Virgin Mary's family and also on religious and cultural values of 14th-century Florence.

"I don't think any other woman is mentioned" as Mary's grandmother in the Bible, Catherine Lawless, author of the paper, told Discovery News. "Mary's patrilineal lineage is the only one given."

Lawless studied the St. Ismeria story, which she said has been "ignored by scholars," in two manuscripts: the 14th century "MS Panciatichiano 40" of Florence's National Central Library and the 15th century "MS 1052" of the Riccardiana Library, also in Florence.

"According to the legend, Ismeria is the daughter of Nabon of the people of Judea, and of the tribe of King David," wrote Lawless. She married "Santo Liseo," who is described as "a patriarch of the people of God." The legend continues that the couple had a daughter named Anne who married Joachim. After 12 years, Liseo died. Relatives then left Ismeria penniless.

Ismeria then goes to a hospital where she finds refuge. She is said to perform a miracle, filling a shell with fish to feed all of the hospital's patients. After this miracle she prays to be taken away from the "vainglory of this world."

After God called her to Paradise, a rector at the hospital informed the Virgin Mary and Jesus of her passing. They departed for the hospital with the 12 Apostles, Mary Magdalene, Mary Salome and Mary Cleophas. There they paid honor to St. Ismeria.

She also pointed out that "the great bulk of Christian martyrs of the west died under the Roman persecutions, which ended in the fourth century."

"The grandmother of the Virgin was no widow who threatened the patrimony of her children by demanding the return of her dowry, nor did she threaten the family unit by remarrying and starting another lineage," she added. "Instead, her life could be seen as an ideal model for Florentine penitential women."

"What is so striking about St. Ismeria," Carolyn Muessig of the University of Bristol's Department of Theology and Religious Studies told Discovery News, "is that she is a model for older matrons. Let's face it: Older female role models are hard to come by in any culture."

"But the fact that St. Ismeria came to the fore in late medieval Florence," Muessig concluded, "reveals some of the more positive attitudes that medieval culture had towards the place and the importance of women in society."
at 12:15