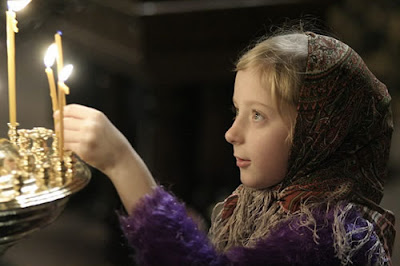 This is the Great Doxology which appears in Eastern Orthodox Matins

and Great Compline liturgies daily througout the world. It is also found among the Odes (as Ode 14) following the Psalms in various manuscripts of the Septuagint, most notably and earliest, the great Codex Alexandrinus

. The major differences between these texts are: the insertion of a line between Rahlfs lines 35 and 36:

and the attachment at the end of a threefold Trisagion and the Doxology. There are also some minor variations in the manuscripts in lines 4 through 8.

VII.47. The wording is somewhat different, which is not surprising in the AC, otherwise well-known for its alteration of source materials by interpolation, omission, and replacement. But this is also good evidence that a shorter version of the Great Doxology, roughly similar to the Latin version, was in use in the fourth century in at least some places.

Like much of early Christian liturgical hymnology whose precise origins are lost to us, the Great Doxology is largely a pastiche of other biblical texts, beginning with Luke 2.14, and containing other extracts from the Psalms and other texts. As may be well known, the other Odes include various hymns and songs otherwise found in biblical texts, including the Magnificat or Prayer of Mary the Theotokos

from Luke 2.29-32, and even the Song of the Three Youths from the Additions to Daniel chapter 3, and the Prayer of Manasseh

. All of these were used in various liturgical settings, and so such collections of Odes were typically practical, and not just excercises in redundancy.

I have always enjoyed discoveries like these, which show the deep roots of Eastern Orthodox traditions in particular, their great antiquity, and the respect in which these liturgical writings were held even in the distant past, so as to even be bound in a pandect manuscript of a Bible, and one of the most famous surviving from antiquity, at that! One can’t help but be reassured, feeling a sense of stability and certainty in knowing that this text has remained the same for over 1600 years, and has been sung every day for all that time. One also can’t help but be amazed at such a thing.