My Home: Harbin, Heilongjiang in the Heat 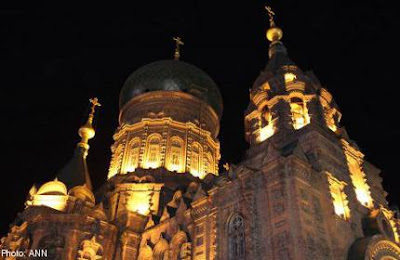 Thousands of tourists flock to Harbin in January, drawn by the fantastical statues on show in the town's international ice and snow festival. In September though, winter is still a couple of months away and there's no sign of the white fluffy stuff that has made the capital of Heilongjiang province in northeastern China famous. Well, except that is, for an ice sculpture of a dolphin on a table in busy Central Street.

It's 20 degrees Celsius today and hot looking girls along with the rapidly melting dolphin are probably wishing they could cool off in the venue they're promoting - the Ice House, located in the basement of a nearby building, apparently a precursor to the winter's "city of ice".

Elsewhere in town, local government is aggressively promoting Harbin as a summer resort, highlighting its diverse wetlands as well as its culture.

"Harbin has a rich historical heritage," says Wang Yi, the city's lady vice-mayor who is in charge of tourism development. "It is a city where the east meets west and it offers a blend of oriental and Western cultures."

Indeed, Harbin is like no other Chinese city with architecture that clearly shows Russian and European influences and has you thinking for a while that you're in eastern Europe. Central Street, the 1.4-kilometre stretch in the city's business district, is lined with buildings of Baroque and Byzantine styles.

The cobblestone pedestrian street is part of the original town built by the Russians at the turn of the 20th century when they first came to the then sleepy fishing village along the Songhua river to construct the Chinese Eastern Railway. Today, the buildings house restaurants, brand-name stores and souvenir shops that sell all things Russian like matryoshka dolls and vodka.

The Russian Orthodox Church Saint Sophia Cathedral escaped destruction during the Cultural Revolution and was used as a warehouse for a state-run department store. The church was restored in 1996 after the Chinese government designated it as a national cultural heritage site and is now a museum showcasing the multicultural architectural development of the city.

Saint Nicholas Cathedral wasn't quite so lucky: it was destroyed by the Red Guards in 1966. A rich businessman, Wang Fu Xiang, decided to build a replica of the church in Volga Manor, a resort about an hour and a half away from the city.

Volga Manor offers a Russian experience from the traditional welcome that greets guests on arrival to the 30 buildings scattered all over the compound, including a replica of the Pavlov Castle.

One of the biggest programmes in Harbin is the ongoing restoration of the Chinese Baroque Block. The project, which covers 10 zones, features the unique Baroque facade that hides the two to three storey-structures inside and a backyard resembling Beijing courtyard houses. The redevelopment is costing 1.3 billion yuan (S$262 million) and the buildings are being earmarked for arts, tourism and movie studios.

Harbin also has something to offer for nature lovers like the Binjiang Wetland, which opened in June. It covers an area of 104 square kilometres and has hundreds of rare species of birds and fish such as grey cranes and white cranes.

The guides are former farmers who used to grow rice and wheat on the land. According to the government, it will take at least three years to fully develop the wetland into a full-fledged ecological and leisure development zone.

Sun Island Park on the north shore of the Songhua river, is also worth a visit. It offers many attractions like the Squirrel Island, Deer Park, Swan Lake and Flower Park.

There is also a Russian village that offers visitors an idea on how Russians lived in Harbin. The highlights include life-sized Matryoshka dolls painted to look like leaders Vladimir Putin, Boris Yeltsin, Mikhail Gorbachev, Stalin and Lenin.

Across the river, an opera house is being built that promises to be much grander than the one in Sydney. The river is frozen during the winter months and it is here where Harbin's world-renowned ice and snow festival is held. In September, however, it's just water and sand.

At the entrance to the park is a giant structure of the sun, surrounded by nine smaller suns. According to Chinese myth, during the Chou dynasty (1027-221 BC), 10 suns would take turns appearing in the sky. Each day, they would travel with their mother, the goddess Xi He, to the lake where she would wash her children and put them to dry on the branches of an enormous mulberry tree.

From the tree, one sun would move off into the sky for a journey of one day, to reach the mount Yen-Tzu in the Far West. Then, one day, the suns decided to appear together. But the combined heat of the 10 suns made life on the Earth unbearable. Emperor Yao asked Di Jun, the father of the 10 suns, to persuade his children to appear one at a time. The suns refused not listen. Di Jun sent the archer Yi armed with a magic bow and 10 arrows to frighten the disobedient suns. Yi was able to shoot nine suns but the emperor had sent one of his couriers to steal an arrow from the archer. So one sun remains today.

"This is how the sun looks like in Chinese myth," says our guide, pointing to the giant sculpture that has three legs and a bird on top of its head.

Proof, as if it were needed, that Harbin is not all about snow. A hot sun shines there too.