Freedom of Faith: the Problem of Discrimination and Persecution 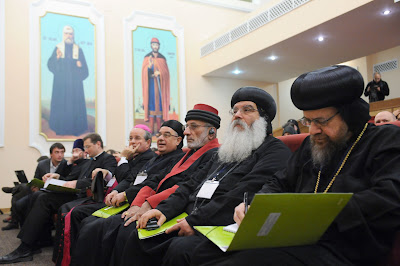 A Conference on the Freedom of Faith: the Problem of Discrimination and Persecution of Christians opened at the conference hall of “Danilovskaya” hotel in Moscow on 30 November 2011. Taking part in the opening were Metropolitan Hilarion of Volokolamsk, chairman of the Moscow Patriarchate’s Department for External Church Relations; Archbishop Edwin Joseph Ender, representative of the Holy See; Mr. Massimo Introvigne, representative of the OSCE on combating racism, xenophobia and discrimination against Christians and members of other religions.

The Russian Orthodox Church has initiated the forum with support of the Christian Interconfessional Committee, the St. Gregory the Theologian Charity Foundation and the International Organization “Aid to the Church in Need.”

Attending the opening of the Conference were representatives of the Patriarchates of Alexandria, Antioch, Jerusalem and Serbia, of the Orthodox Churches of Cyprus and Greece, of the Roman Catholic Church, the Maronite Church, the Armenian Apostolic Church, the Assyrian Church of the East, the Muslim and Jewish communities, and the international, inter-Christian, interreligious and public organizations.

Citing the data provided by Massimo Introvigne, Metropolitan Hilarion reminded the listeners that every five minutes a Christian is killed for his faith, and one hundred and five thousand Christians come to a violent death in interreligious conflicts every year. Metropolitan Hilarion underscored the necessity of recognizing a simple fact: Christians are the most persecuted religious community in the world. He named Egypt, Libya, Tunisia, Algeria, Iraq, Pakistan, Afghanistan, North Sudan, Nigeria, Etritrea, Somali, Saudi Arabia, the Maldives, Bangladesh, Malaysia, Indonesia, the Philippines, Myanmar, Laos, and India as countries in which Christians are most persecuted.

Metropolitan Hilarion, who accompanied His Holiness Patriarch Kirill of Moscow and All Russia in his visit to Syria and Lebanon in November, expressed his concern about the future of religious minorities, mostly Christians, in Syria, in case the political situation is destabilized and a civil is unleashed.

He underscored that not only Christians, but also representatives of other religious minorities are persecuted, and added that the governments of certain countries do much for establishing harmonious intereligious relations.

The DECR chairman noted in particular the historical role of the European countries and Russia in the protection of Christian minorities. He emphasized, however, that the problem of persecution of Christians has been hushed up in Europe for many years. “The European politicians, being moved by the spirit of political correctness, talked a lot about the inadmissibility of anti-Semitism, Islamophobia, and other manifestations of religious or ethnic intolerance, but passed over the discrimination of Christians in silence.”

The situation has begun to change only in the recent years, he said, and gave examples of conferences and resolutions on the problem.

While describing the actions of the Russian Orthodox Church in defense of the persecuted Christians, Metropolitan Hilarion emphasized that the Moscow Patriarchate has come out resolutely against any form of xenophobia, religious intolerance and extremism. “It is known that though millions of the followers of different religions have been living in Russia, there were no religious wars in our country. We cannot be indifferent to the persecution of our brothers in the Muslim countries and hope that our Muslim compatriots will extend their support to us. We hope that our fellow believers in other countries share our pain over the suffering Christians and shall seek the ending of persecution and discrimination,” he said. He hopes that the problem of discrimination against Christians will be considered in the context of cooperation among Christians.

The DECR chairman believes that the Pan-Orthodox Council, currently being prepared, will state its opinion on the problem of the persecution of Christians in different regions of the world.