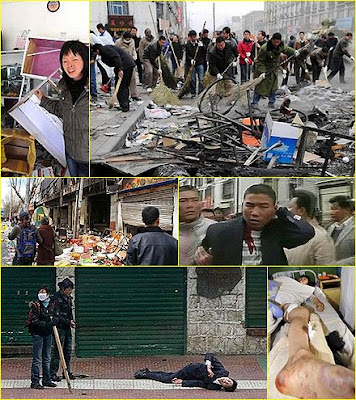 One question that I haven't heard asked or answered much in Western news media over the past few days: were the actions of the rioters in Lh@sa justified?

One thing that's become quite clear is that the protests in Lh@sa devolved quickly into an all-out riot — complete with lynchings — while in other places monks seem to have marched more or less peacefully. (At least according to what we know now, which is very little.) Even if half the stuff written in the Chinese media about what Tibetans in Lh@sa did to local Han and Hui residents is true, I'm gonna have to step out on a limb here and say that it's just plain wrong.

In the Lh@sa unrest, rioters sliced off people's ears, gored children, clubbed young Tibetans into coma and tried to block nurses from saving an injured 5-year-old.

Tibet regional chairman Qiangba Puncog told a news briefing in Beijing on Monday that 13 innocent civilians were burned or stabbed to death in Friday's riots.

Puncog said that the mobs' actions were extremely brutal. "In one incident, they poured gasoline onto an innocent person and burned the person to death. In another, they knocked over a police officer, and then knifed a fist-size piece of flesh out of the officer's buttocks."

Tubdain, a local resident, said he saw a girl in red-clothing who appeared to be an ethnic Han chased and clubbed by six people on the Dosenge Road in the downtown area. "The mobs stoned her head and batted her knees with wooden clubs," said the 50-something Tubdain.

"Blood trickled down her face. She stumbled to the ground, crying and begging the rioters to let her go," he said. "They seemed like a bunch of insane people, growling, stabbing, smashing and burning. It was so hard to believe what I saw."

Jin Hong, a clerk with the Bank of China outlet on Lh@sa's Beijing East Road, suffered a broken pelvis after jumping from the second-floor of the building while trying to protect a cash box.

"About 60 rioters, all young men and women, attacked the bank with rocks and axes and set fire to the building on Friday afternoon."

"I hid in the toilet with three colleagues, but the mobs thronged against the toilet door. I had to jump out of the window," she said.
at 17:04