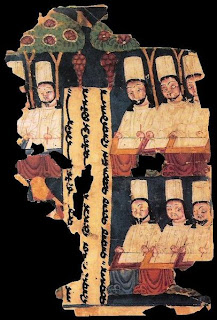 Manichaeism (in Modern Persian آیین مانی Āyin e Māni; Chinese: 摩尼教; pinyin: Móní Jiào) was one of the major Iranian Gnostic religions, originating in Sassanid Persia. Although most of the original writings of the founding prophet Mani (AD 210–276) have been lost, numerous translations and fragmentary texts have survived. Manichaeism thrived between the third and seventh centuries, and at its height was one of the most widespread religions in the world. Manichaean churches and scriptures existed as far east as China and as far west as the Roman Empire. Manichaeism appears to have died out before the sixteenth century in southern China.

The original six sacred books of Manichaeism, composed in Syriac Aramaic, were soon translated into other languages to help spread the religion. As they spread to the east, the Manichaean writings passed through Middle Persian, Parthian, Sogdian, and ultimately Uyghur and Chinese translations. As they spread to the west, they were translated into Greek, Coptic, and Latin. The spread and success of Manichaeism were seen as a threat to other religions, and it was widely persecuted in Christian, Zoroastrian, Buddhist, and later, Islamic areas.

Mani lived approximately AD 210–276 and resided in Babylon, which was then a province of the Persian Empire. According to the Cologne Mani-Codex, Mani's parents were Elcesaites of southern Mesopotamia. The primary language of Babylon at that time was Eastern Middle Aramaic, which included three main dialects: Judeo-Aramaic (the language of the Talmud), Mandaean Aramaic (the language of the Mandaean religion), and Syriac Aramaic, which was the language of Mani, as well as of the Assyrian Christians. "Mani" is a Persian name found in all three Aramaic dialects and therefore common among its speakers. Mani composed seven writings, six of which were written in Syriac Aramaic. The seventh, the Shabuhragan,was written by Mani in Middle Persian and dedicated to the contemporary King of Sassanid Persia, Shapur I, who was a strong supporter of Manichaeism and encouraged its spread throughout his empire. Mani also created a unique version of the Syriac script called Manichaean script, which was used in all of the Manichaean works written within the Persian Empire, whether they were in Syriac or Middle Persian, and also for most of the works written within the Uyghur Empire.

Manichaeism claimed to present the complete version of teachings only revealed partially by previous teachers. Accordingly, as it spread, it adapted new deities from other religions into forms it could use for its scriptures. Its original Aramaic texts already contained stories of Jesus. When they moved eastward and were translated into Iranian languages, the names of the Manichaean deities (or angels) were often transformed into the names of Zoroastrian yazatas. Thus Abbā dəRabbūṯā ("The Father of Greatness", the highest Manichaean deity of Light), in Middle Persian texts might either be translated literally as pīd ī wuzurgīh, or substituted with the name of the deity Zurwān. Similarly, the Manichaean primal figure Nāšā Qaḏmāyā "The Original Man" was rendered "Ohrmazd Bay", after the Zoroastrian god Ahura Mazda. This process continued to Manichaeism's meeting with Chinese Buddhism, where, for example, the original Aramaic "karia" (the "call" from the world of Light to those seeking rescue from the world of Darkness), becomes identified in the Chinese scriptures with Guan Yin (觀音, literally, "watching/perceiving sounds [of the world]", the Chinese Bodhisattva of Compassion).

The original six Syriac writings are not preserved, although their Syriac names have been. There are also fragments and quotations from them. A long quotation, brought by the Syrian Nestorian Christian, Theodor bar-Konai, in the eighth century, shows that in the original Syriac Aramaic writings of Mani there was no influence of Iranian or Zoroastrian terms. The terms for the Manichaean deities in the original Syriac writings are in Aramaic. The adaptation of Manichaeism to the Zoroastrian religion appears to have begun in Mani's lifetime however, with his writing of the Middle Persian Shabuhragan, his book dedicated to the King Shapuhr. In it, there are mentions of Zoroastrian deities such as Ohrmazd, Ahriman, and Az. Manichaeism is often presented as a Persian religion, mostly due to the vast number of Middle Persian, Parthian, and Soghdian (as well as Turkish) texts discovered by German researchers near Turfan, in the Xinjiang (Chinese Turkestan) province of China, during the early 1900s. As far as its origins are concerned, however, Manichaeism was no more a Persian or Iranian religion than Talmudic Judaism or Babylonian Mandaeism/Mandaeanism, which were also written in Aramaic in Babylon in roughly the third century AD.

Mani began preaching at an early age and was likely influenced by Mandaeanism. According to biographies preserved by Ibn al-Nadim and the Persian polymath al-Biruni, he allegedly received a revelation as a youth from a spirit, whom he would later call his Twin, his Syzygos, his Double, his Protective Angel or 'Divine Self'. It taught him truths which he developed into a religion. His 'divine' Twin or true Self brought Mani to Self-realization and as such he becomes a 'gnosticus', someone with divine knowledge and liberating insight. He claimed to be the 'Paraclete of the Truth', as promised in the New Testament: the Last Prophet and Seal of the Prophets finalizing a succession of figures including Zoroaster, Buddha, and Jesus. In the Orthodox Tradition the title Paraclete was understood to refer to God in the person of the Holy Spirit.

Manichaeism continued to spread with extraordinary speed through both the east and west. It reached Rome through the apostle Psattiq by AD 280, who was also in Egypt in 244 and 251. It was flourishing in the Fayum area of Egypt in AD 290. Manichaean monasteries existed in Rome in 312 A.D. during the time of the Christian Pope Miltiades.

In 291, persecution arose in the Persian empire with the murder of the apostle Sisin by Bahram II, and the slaughter of many Manichaeans. In AD 296, Diocletian decreed against the Manichaeans: "We order that their organizers and leaders be subject to the final penalties and condemned to the fire with their abominable scriptures", resulting in many martyrdoms in Egypt and North Africa (see Diocletian Persecution). By AD 354, Hilary of Poitiers wrote that the Manichaean faith was a significant force in southern France. In AD 381 Christians requested Theodosius I to strip Manichaeans of their civil rights. He issued a decree of death for Manichaean monks in AD 382.

When Christians first encountered Manichaeism, they deemed it a heresy, since it had originated in a heavily Gnostic area of the Persian empire. Augustine of Hippo (AD 354-430) converted to Christianity from Manichaeism, in the year 387. This was shortly after the Roman Emperor Theodosius I had issued a decree of death for Manichaeans in AD 382 and shortly before he declared Christianity to be the only legitimate religion for the Roman Empire in 391. According to his Confessions, after eight or nine years of adhering to the Manichaean faith as a member of the group of "hearers", Augustine became a Christian and a potent adversary of Manichaeism, seeing their beliefs that knowledge was the key to salvation as too passive and not able to effect any change in one's life.
at 11:59