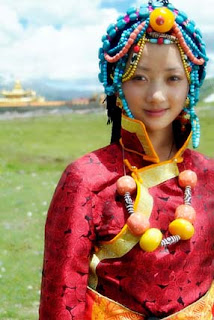 Spring Festival, celebrated at Lunar New Year, is as joyful an occasion in China as Christmas is in the West. Each ethnic minority of the Chinese Nationality, along with the Han Ethnic Group, has its customary way of celebrating the holiday.

Tibetan Ethnic Group
Tibetans welcome the Lunar New Year grotesquely masked and brightly attired. Young men perform a spinning dance as they sing for blessings in the coming year, to the accompaniment of a large drum and fanfares on bugle and conch. On New Year's morning, women fetch the "propitious water" that brings blessings to all in the New Year.

Zhuang Ethnic Group
People of the Zhuang ethnic group generally live in southwestern China's Guangxi Zhuang Autonomous Region, also in Guizhou, Yunnan and Guangdong provinces. It is the Zhuang custom to spend Lunar New Year's Eve preparing sticky rice, which augurs good luck and prosperity. The next morning, everyone gets up early, dresses in new clothes and gathers to set off firecrackers that frighten off any malevolent spirits on the first day of the new year. It is also customary for women of the Zhuang ethnic minority to bring "new water" from a well or river, symbolic of a new year of life, to the household.

Buyi Ethnic Group
Families of the Buyi ethnicity spend Lunar New Year's Eve beside the village pond. At New Year's daybreak young Buyi women compete to draw the most water from the pond in the shortest time. The happy winner is the most hardworking girl.

Man Ethnic Group
There are four subdivisions of the Man ethnic group, known as the Red, Yellow, Blue and White Flags. At Spring Festival each group hoists its respective flag in auspicious welcome of the New Year.

Dong Ethnic Group
People of the Dong ethnic group generally live in southwestern China's Guizhou and Hunan provinces. At Spring Festival two Dong villages jointly stage a gala celebration of singing and dancing in the square to the accompaniment of the lusheng(a reed pipe instrument).

Daur Ethnic Group
The Daur people live on the banks of the Nejiang river in northeastern China. On Lunar New Year's morning, the younger Daur villagers dress in new clothes and go out to pay respects to the village elders. They later visit their relatives' homes and eat braised rice-cakes.

Oroqen Ethnic Group
Families of the Oroqen ethnic minority exchange toasts on Lunar New Year's morning in celebration of Spring Festival. Horse races are held on the second and third day of the New Year, and on the 15th day each family holds a sumptuous feast. On the morning of the 16th day, the younger people kowtow to their elders, and all concerned smear cinders on one another's faces. This Oroquen custom is a way of expressing blessings to all and respect for village elders.
at 00:16