Dormition of the Theotokos 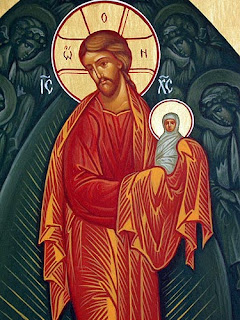 The Dormition of the Theotokos (Greek: Κοίμησις Θεοτόκου, Koímēsis, often anglicized as Kimisis) is a Great Feast of the Eastern Orthodox

, Oriental Orthodox and Eastern Catholic Churches which commemorates the "falling asleep" or death of the Theotokos (Mary, the mother of Jesus; literally translated as God-bearer), and her bodily resurrection before being taken up into heaven. It is celebrated on August 15 (August 28, N.S. for those following the Julian Calendar) as the Feast of the Dormition of the Mother of God. The Armenian Apostolic Church celebrates the Dormition not on a fixed date, but on the Sunday nearest August 15.

The Feast of the Dormition is preceded by a two-week fast, referred to as the Dormition Fast. From August 1 to August 14 (inclusive) Orthodox and Eastern Catholics fast from red meat, poultry, meat products, dairy products (eggs and milk products), fish, oil, and wine. The Dormition Fast is a stricter fast than either the Nativity Fast

(Advent) or the Apostles' Fast, with only wine and oil (but no fish) allowed on weekends. As with the other Fasts of the Church year, there is a Great Feast

that falls during the Fast; in this case, the Transfiguration (August 6), on which fish, wine and oil are allowed.

In some places, the services on weekdays during the Fast are similar to the services during Great Lent (with some variations). Many churches and monasteries in the Russian tradition will perform the Lenten services on at least the first day of the Dormition Fast. During the Fast, either the Great Paraklesis

(Supplicatory Canon) or the Small Paraklesis are celebrated every evening except Saturday evening and the Eves of the Transfiguration and the Dormition.

(August 1), on which day it is customary to have a crucession and perform the Lesser Sanctification of Water.

In Orthodoxy and Catholicism, as in the language of scripture, death is often called a "sleeping" or "falling asleep" (Greek κοίμησις; whence κοιμητήριον > coemetērium > cemetery, a place of sleeping). A prominent example of this is the name of this feast; another is the Dormition of Anna, Mary's mother. According to Orthodox and Eastern Catholic tradition, Mary, having spent her life after Pentecost supporting and serving the nascent Church, was living in the house of the Apostle John, in Jerusalem, when the Archangel Gabriel revealed to her that her repose would occur three days later. The apostles, scattered throughout the world, are said to have been miraculously transported to be at her side when she died. The sole exception was Thomas, who had been delayed. He is said to have arrived three days after her death, and asked to see her grave so that he could bid her goodbye. Mary had been buried in Gethsemane, according to her request. When they arrived at the grave, her body was gone, leaving a sweet fragrance. An apparition is said to have confirmed that Christ had taken her body to heaven after three days to be reunited with her soul. Orthodox theology teaches that the Theotokos has already undergone the bodily resurrection which all will experience at the Second coming, and stands in heaven in that glorified state which the other righteous ones will only enjoy after the Last Judgment.

The Dormition of the Theotokos is celebrated on August 15 (August 28, N.S. for those following the Julian Calendar), the same calendar day as the Roman Catholic Feast of the Assumption of Mary. The Dormition and the Assumption are different names for the same event, Mary's departure from the earth, although the beliefs are not entirely the same.

The Orthodox Church teaches that Mary died a natural death, like any human being; that her soul was received by Christ upon death; and that her body was resurrected on the third day after her repose, at which time she was taken up, bodily only, into heaven. Her tomb was found empty on the third day.
Roman Catholic teaching holds that Mary was "assumed" into heaven in bodily form. Some Catholics agree with the Orthodox that this happened after Mary's death, while some hold that she did not experience death. Pope Pius XII

, in his Apostolic constitution, Munificentissimus Deus

(1950), which dogmatically defined the Assumption, appears to have left open the question of whether or not Mary actually underwent death in connection with her departure, but alludes to the fact of her death at least five times.

Both churches agree that she was taken up into heaven bodily. The Orthodox belief regarding Mary's falling asleep are expressed in the liturgical texts used of the feast of the Dormition (August 15) which is one of the Twelve Great Feasts of the Orthodox Church, and is held by all pious Orthodox Christians.

The Eastern Catholic observance of the feast corresponds to that of their Orthodox counterparts, whether Eastern Orthodox or Oriental Orthodox.

The Dormition is known as the Death of the Virgin

in Catholic art, where it is a reasonably common subject, mostly drawing on Byzantine models, until the end of the Middle Ages. The Death of the Virgin by Caravaggio

, of 1606, is probably the last famous Western painting of the subject.

It is customary in many places to bless fragrant herbage on the Feast of the Dormition.

In some places, the Rite of the "Burial of the Theotokos" is celebrated at the Dormition, during the All-Night Vigil

. The order of the service is based on the service of the Burial of Christ on Great Saturday. An Epitaphios of the Theotokos

, a richly embroidered cloth icon portraying her lying in state is used, together with specially composed hymns of lamentation which are sung with Psalm 118. There are also special Evlogitaria of the Dormition which are chanted, echoling the Evlogitaria of the Resurrection which are chanted on Great Saturday and at Sunday Matins throughout the year. The Epitaphios is placed on a bier, and carried in procession in the same way as the Epitaphios of Christ is during Holy Week.

This practice began in Jerusalem, and from there it was carried to Russia, where it was followed in various Dormition Cathedrals, in particular that of Moscow. The practice slowly spread among the Russian Orthodox, though it is not by any means a standard service in all parishes, or even most cathedrals or monasteries. In Jerusalem, the service is chanted during the Vigil of the Dormition. In some Russian churches and monasteries, it is served on the third day after Dormition.

The Feast of the Dormition

has a one-day Forefeast

and 8 days of Afterfeast

. The feast is framed and accentuated by three feasts in honour of Jesus Christ, known as the "Three Feasts of the Saviour in August". These are: the Procession of the Cross (August 1), the Transfiguration (August 6), and the Icon of Christ "Not Made by Hand

) was originally composed for and used at the funeral of the Theotokos. This tradition probably developed because in its final form the anaphora

has twelve paragraphs, i.e., one for each concelebrating apostle present at the funeral mass of the Theotokos.

The Dormition tradition is associated with various places, most notably with Jerusalem, which contains Mary's Tomb and the Basilica of the Dormition

, and Ephesus, which contains the House of the Virgin Mary

, and also with Constantinople

At the point in the later fifth century when the earliest Dormition traditions surface in manuscripts, Stephen Shoemaker has detected the sudden appearance of three distinct narrative traditions describing the end of Mary's life: he has characterised them as the "Palm of the Tree of Life" narratives, the "Bethlehem" narratives, and the "Coptic" narratives—aside from a handful of atypical narratives.

One might notice the similarities between the traditional depictions of the Dormition of the Theotokos in Byzantine iconography and the account of the death of the Egyptian Desert Father, Sisoes the Great. In both Christ is seen coming to receive the soul of the dying saint surrounded by an aureola or cloud of blinding light and accompanied by the angels and prophets. In Byzantine iconography the other Christ is shown surrounded by such a cloud of light are those of also seen in icons of the Transfiguration, the Resurrection and the Last Judgment. One might further note that in some icons of the Dormition the Theotokos is depicted at the top of the icon in a similar aureola before the opening gates of heaven. This suggests that contemporary accounts of the deaths of the Desert Fathers accompanied by sudden burst of light came to influence the development of the iconography of the Dormition.
at 08:38