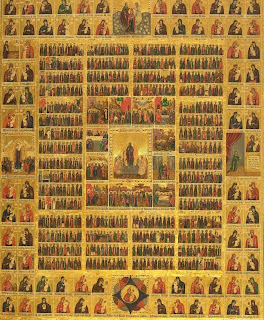 The liturgical year, also known as the Christian year, consists of the cycle of liturgical seasons in Christian churches which determines when feast days, including celebrations of saints, are to be observed, and which portions of Scripture are to be read. Distinct liturgical colours may appear in connection with different seasons of the liturgical year. The dates of the festivals vary somewhat between the different churches, though the sequence and logic is largely the same.

In both East and West, the dates of many feasts vary from year to year, usually in line with the variation in the date of Easter, with which most other moveable feasts are associated. The extent to which feasts and festivals are celebrated also varies between churches; in general, Protestant churches, in the name of modernism and individualism, observe far fewer than Catholic and Orthodox, in particular with regard to feasts of the Virgin Mary and the other universal Saints.

The liturgical cycle divides the year into a series of seasons, each with their own mood, theological emphases, and modes of prayer, which can be signified by different ways of decorating churches, colors of Paraments and Vestments for clergy, scriptural readings, themes for preaching and even different traditions and practices often observed personally or in the home. In churches that follow the liturgical year, the scripture passages for each Sunday (and even each day of the year in some traditions) are specified by a list called a lectionary.

Among non-Catholic Western Christians, Anglicans and Lutherans have traditionally followed the lectionary since the days of the Protestant Reformation. Following the Roman Catholic liturgical reform of the Roman Rite instituted by Pope Paul VI in 1969, the adoption and use of lectionaries in other Protestant churches (Methodist, Reformed, United, etc.) increased. In particular, the growing influence of the Revised Common Lectionary led to a greater awareness of the Christian year among Protestants in the later decades of the 20th century, especially among mainline denominations.

The Liturgical year in the Eastern Orthodox Church is characterized by alternating fasts and feasts, and is in many ways similar to the Roman Catholic year described above. However, Church New Year (Indiction) traditionally begins on September 1 (Old Style or New Style), rather than the first Sunday of Advent. It includes both feasts on the Fixed Cycle and the Paschal Cycle (or Moveable Cycle). The most important feast day by far is the Feast of Pascha (Easter)—the Feast of Feasts. Then the Twelve Great Feasts, which commemorate various significant events in the lives of Jesus Christ and of the Theotokos (Virgin Mary).

The majority of Orthodox Christians (Russians, in particular) follow the Julian Calendar in calculating their ecclesiastical feasts, but many (including the Ecumenical Patriarchate and the Church of Greece), while preserving the Julian calculation for feasts on the Paschal Cycle, have adopted the Revised Julian Calendar (at present coinciding with the Gregorian Calendar) to calculate those feasts which are fixed according to the calendar date. Between 1900 and 2100, there is a thirteen-day difference between the dates of the Julian and the Revised Julian and Gregorian calendars. Thus, for example, where Christmas is celebrated on December 25 O.S. (Old Style), the celebration coincides with January 7 in the Revised Calendar. The computation of the day of Pascha (Easter) is, however, always computed according to a lunar calendar based on the Julian Calendar, even by those churches which observe the Revised Calendar.

There are four fasting seasons during the year: The most important fast is Great Lent which is an intense time of fasting, almsgiving and prayer, extending for forty days prior to Palm Sunday and Holy Week, as a preparation for Pascha. The Nativity Fast (Winter Lent) is a time of preparation for the Feast of the Nativity of Christ (Christmas), but whereas Advent in the West lasts only four weeks, Nativity Fast lasts a full forty days. The Apostles' Fast is variable in length, lasting anywhere from eight days to six weeks, in preparation for the Feast of Saints Peter and Paul (June 29). The Dormition Fast lasts for two weeks from August 1 to August 14 in preparation for the Feast of the Dormition of the Theotokos (August 15). The liturgical year is so constructed that during each of these fasting seasons, one of the Great Feasts occurs, so that fasting may be tempered with joy.

In addition to these fasting seasons, Orthodox Christians fast on Wednesdays and Fridays throughout the year (and some Orthodox monasteries also observe Monday as a fast day). Certain fixed days are always fast days, even if they fall on a Saturday or Sunday (in which case the fast is lessened somewhat, but not abrogated altogether); these are: The Decollation of St. John the Baptist, the Exaltation of the Cross and the day before the Epiphany (January 5). There are several fast-free periods, when it is forbidden to fast, even on Wednesday and Friday. These are: the week following Pascha, the week following Pentecost, the period from the Nativity of Christ until January the 5th and the first week of the Triodion (the week following the 33rd Sunday after the Pentecost).
at 23:09