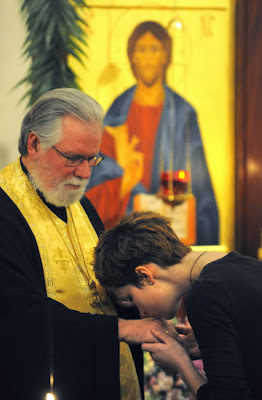 Throughout the world members of the Eastern Orthodox Churches

, in fact for half of the people who call themselves Christian, the season of Great Lent begins today. According to the liturgical calendars

of the Eastern Orthodox and Eastern Catholic Church, Monday 7th, 2011 is Clean Monday or in Greek: Καθαρά Δευτέρα. Western Christianity celebrates the start of Lent forty days, not including the Sundays, before Easter with Ash Wednesday. While in the Eastern Christian Churches

the ritual to observe the beginning of Lent occurs during a special afternoon worship service on the Sunday prior to Clean Monday. This service which is usually called the Forgiveness Vespers

ends with a very traditional ceremony. Parishioners bow to each other and recite a litany of absolution asking for forgiveness for any and all transgressions a person may have made against another. Forgiveness is then given as an act of Christian love and a renewed relationship begins without record of past wrongs.

This first week of Lent is characterized by a spiritual spring cleaning. It is customary for Christians in the Eastern Churches to go to confession during this week. Many prayers and scriptural readings have a cleansing theme to them. It is during this time a person may chose to fast in order to purge physically as well as spiritually. Many of the habits that clutter a person spiritually are given up. Others begin new regiments of spiritual disciplines to sweep out spiritual morose.

For your Eastern Christian brothers and sisters take time to wish them a Happy Clean Monday.