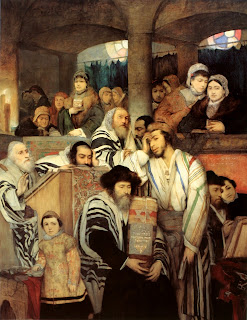 Yom Kippur (Hebrew: יוֹם כִּפּוּר or יום הכיפורים‎, IPA: [ˈjom kiˈpur]), also known as the Day of Atonement, is one of the holiest days of the year for the Jewish people. Its central themes are atonement and repentance.

Jews traditionally observe this holy day with a 25-hour period of fasting and intensive prayer, often spending most of the day in synagogue services. Yom Kippur completes the annual period known in Judaism as the High Holy Days (or sometimes "the Days of Awe"). Boys under the age of 13, and girls under 12, are not required to fast from sundown to sun-up.

Yom Kippur is the tenth day of the month of Tishrei. According to Jewish tradition, God inscribes each person's fate for the coming year into a book, the Book of Life, on Rosh Hashanah, and waits until Yom Kippur to "seal" the verdict. During the Days of Awe, a Jew tries to amend his or her behavior and seek forgiveness for wrongs done against God (bein adam leMakom) and against other human beings (bein adam lechavero). The evening and day of Yom Kippur are set aside for public and private petitions and confessions of guilt (Vidui). At the end of Yom Kippur, one considers oneself absolved by God.

Yom means "day" in Hebrew and Kippur comes from a root that means "to cover or hide"; a secondary meaning is "to obliterate (sin)" and hence "to expiate". Some say there is a link to kapporet, the “mercy seat” or covering of the Ark of the Covenant. Abraham Ibn Ezra holds that the word indicates the task and not just the shape of the ark cover; since the blood of the Yom Kippur sacrifice was sprinkled in its direction (Lev. 16), it was the symbol of propitiation.

Preceding dayErev Yom Kippur (lit. "eve [of] day [of] atonement") is the day preceding Yom Kippur, corresponding to the ninth day of the Hebrew month of Tishrei. This day is commemorated with two festive meals, the giving of charity, and asking others for forgiveness.

Leviticus 16:29 mandates establishment of this holy day on the 10th day of the 7th month as the day of atonement for sins. It calls it the Sabbath of Sabbaths and a day upon which one must afflict one's soul.

Leviticus 23:27 decrees that Yom Kippur is a strict day of rest.

Five additional prohibitions are traditionally observed, as detailed in the Jewish oral tradition (Mishnah tractate Yoma 8:1):
A parallel has been drawn between these activities and the human condition according to the Biblical account of the expulsion from the garden of Eden. Refraining from these symbolically represents a return to a pristine state, which is the theme of the day.

Total abstention from food and drink usually begins 20 minutes before sundown (called tosefet Yom Kippur, lit. "Addition to Yom Kippur"), and ends after nightfall the following day. Although the fast is required of all healthy adults, it is waived in the case of certain medical conditions.

Virtually all Jewish holidays involve a ritual feast, but since Yom Kippur involves fasting, Jewish law requires one to eat a large and festive meal on the afternoon before Yom Kippur, after the Mincha (afternoon) prayer.

Wearing white clothing, for men a Kittel, is traditional to symbolize one’s purity on this day. Many Orthodox men immerse themselves in a mikvah on the day before Yom Kippur.

Before sunset on Yom Kippur eve, worshippers gather in the synagogue. The Ark is opened and two people take from it two Sifrei Torah (Torah scrolls). Then they take their places, one on each side of the cantor, and the three recite:

The cantor then chants the Kol Nidre prayer

(Hebrew: כל נדרי) in Aramaic, not Hebrew. Its name is taken from the opening words, meaning “All vows”:

The leader and the congregation then say together three times “May all the people of Israel be forgiven, including all the strangers who live in their midst, for all the people are in fault.” The Torah scrolls are then replaced, and the Yom Kippur evening service begins.

Many married men wear a kittel, a white robe-like garment for evening prayers on Yom Kippur, otherwise used by males on their wedding day. They also wear a tallit

(prayer shawl), which is typically worn on Shabbat and other holidays during morning services.

Prayer services begin with the Kol Nidre prayer, which must be recited before sunset, and continue with the evening prayers (Ma'ariv or Arvith), which includes an extended Selichot service.
The morning prayer service is preceded by litanies and petitions of forgiveness called selichot; on Yom Kippur, many selichot are woven into the liturgy of the mahzor

(prayer book). The morning prayers are followed by an added prayer (Musaf) as on all other holidays. This is followed by Mincha (the afternoon prayer) which includes a reading (Haftarah) of the entire Book of Jonah, which has as its theme the story of God's willingness to forgive those who repent.

The service concludes with the Ne'ila ("closing") prayer, which begins shortly before sunset, when the "gates of prayer" will be closed. Yom Kippur comes to an end with a recitation of Shema Yisrael and the blowing of the shofar, which marks the conclusion of the fast.

A recitation of the sacrificial service of the Temple in Jerusalem traditionally features prominently in both the liturgy and the religious thought of the holiday. Specifically, the Avodah (“service”) in the musaf prayer recounts in great detail the sacrificial ceremonies of the Yom Kippur Korbanot (sacrificial offerings) that are recited in the prayers but have not been performed for 2,000 years, since the destruction of the Second Temple in Jerusalem by the Romans.

This traditional prominence is rooted in the Babylonian Talmud’s

description of how to attain atonement following the destruction of the Temple. According to Talmud tractate Yoma, in the absence of a Temple, Jews are obligated to study the High Priest’s ritual on Yom Kippur, and this study helps achieve atonement for those who are unable to benefit from its actual performance. In Orthodox Judaism, accordingly, studying the Temple ritual on Yom Kippur represents a positive rabbinically ordained obligation which Jews seeking atonement are required to fulfill.

In Orthodox synagogues, most Conservative, and some progressive, a detailed description of the Temple ritual is recited on the day. In most Orthodox and some Conservative synagogues, the entire congregation prostrates themselves at each point in the recitation where the Kohen Gadol (High Priest) would pronounce the Tetragrammaton (God’s holiest name, according to Judaism), YHWH (I AM THAT AM).

The main section of the Avodah is a threefold recitation of the High Priest’s actions regarding expiation in the Holy of Holies. Performing the sacrificial acts and reciting Leviticus 16:30, (“Your upright children”). (These three times, plus in some congregations the Aleinu prayer during the Musaf Amidah on Yom Kippur and Rosh Hashanah, are the only times in Jewish services when Jews engage in prostration, with the exception of some Yemenite Jews and talmedhei haRambam (disciples of Maimonides) who may prostrate themselves on other occasions during the year). A variety of liturgical poems are added, including a poem recounting the radiance of the countenance of the Kohen Gadol after exiting the Holy of Holies, traditionally believed to emit palpable light in a manner echoing the Torah's account of the countenance of Moses after descending from Mount Sinai, as well as prayers for the speedy rebuilding of the Temple and the restoration of sacrificial worship. There are a variety of other customs, such as hand gestures to mime the sprinkling of blood (one sprinkling upwards and seven downwards per set of eight).

The Torah calls the day Yom HaKippurim (יוֹם הַכִּפּוּרִים) and in it Leviticus 23:27 decrees a strict prohibition of work and affliction of the soul upon the tenth day of the seventh month, later known as Tishrei. The rites for Yom Kippur are set forth in Leviticus 16:1-34 (cf. Exodus 30:10; Leviticus 23:27-32, Leviticus 25:9; Numbers 29:7-11.)
Traditionally, Yom Kippur is considered the date on which Moses received the second set of Ten Commandments. It occurred following the completion of the second 40 days of instructions from God. At this same time, the Israelites were granted atonement for the sin of the Golden Calf; hence, its designation as the Day of Atonement.

While the Temple in Jerusalem was standing (from Biblical times through 70 A.D.), the Kohen Gadol (High Priest) was mandated by the Torah to perform a complex set of special services and sacrifices for Yom Kippur to attain Divine atonement, the word "kippur" meaning "atone" in Hebrew. These services were considered to be the most important parts of Yom Kippur because through them the Kohen Gadol made atonement for all Jews and the world. During the service, the Kohen Gadol entered the Holy of Holies in the center of the Temple, the only time of the year that anyone went inside. Doing so required special purification and preparation, including five immersions in a mikvah (ritual bath), and four changes of clothing.

Seven days prior to Yom Kippur, the Kohen Gadol was sequestered in the Palhedrin chamber in the Temple, where he reviewed (studied) the service with the sages familiar with the Temple, and was sprinkled with spring water containing ashes of the Red Heifer as purification. The Talmud (Tractate Yoma) also reports that he practiced the incense offering ritual in the Avitnas chamber.

On the day of Yom Kippur, the Kohen Gadol had to follow a precise order of services, sacrifices, and purifications:
The Kohen Gadol wore five sets of garments (three golden and two white linen), immersed in the mikvah five times, and washed his hands and feet ten times. Sacrifices included two (daily) lambs, one bull, two goats, and two rams, with accompanying mincha (meal) offerings, wine libations, and three incense offerings (the regular two daily and an additional one for Yom Kippur). The Kohen Gadol entered the Holy of Holies three times. The Tetragrammaton was pronounced three times, once for each confession.