The Canon of the Bible 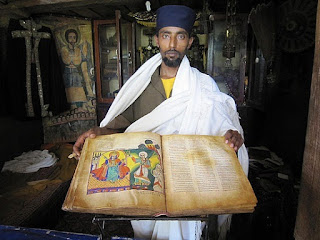 For Orthodox Christians, the canon of the Holy Bible (i.e., its content) is, by definition, the list of scriptures deemed venerable and holy as set forth by the Canons of the Orthodox Church

(referred to as the Rudder elsewhere in these pages). It should be understood that, for the most part, the origin of approved scripture lists began with individual bishops and regional councils as they sought to combat the spread of heretical documents. However, it is likewise important to know that not all such local lists were ratified by ecumenical council. Nor is a book considered part of the Bible—or excluded from it—on the basis of manuscript evidence.

In all, there are six lists that collectively define what the Orthodox consider to be Holy Scripture: Canon LXXXV (85) of those handed down in the name of the Holy and Renowned Apostles; Canon LX (60) of the regional Council held in Laodicea ca. 364; Canon XXXII (32) of the regional Council of Carthageheld during the years ca. 418-424; the “39th Festival Epistle” of St. Athanasios the Great (+ 373), Archbishop of Alexandria; the “heroic verses” of St. Gregory the Theologian (+ 389), Archbishop of Constantinople; and the Verses of St. Amphilochios (+ ca. 403), Archbishop of Iconium, that were addressed to Seleucus.

In terms of ratification, the works containing all six of these lists were explicitly accepted and validated (the sources were listed by name) by Canon II (2) of the Holy and Ecumenical Sixth Council, except for the Apostolic Constitutions referenced by Canon LXXXV (85) of the Apostles “…into some of which certain spurious passages destitute of piety have been interpolated long ago by the heterodox to the detriment of the Church… .” Because Canon II (2) includes the phrase “…that the 85 Canons handed down to us in the name of the holy and glorious Apostles, and as matter of fact accepted and validated by the holy and blissful Fathers preceding us…” it is fair to state that Canon I (1) of the Holy and Ecumenical Fourth Council also applies, to wit: “We pronounce it just and right that the Canons promulgated by the Holy Fathers, in each and every Council down to the present time, continue in full force and effect.” Likewise, Canon I (1) of the Holy and Ecumenical Seventh Council states: “… we welcome and embrace the divine Canons, and we corroborate the entire and rigid fiat of them that have been set forth by the renowned Apostles, who were and are trumpets of the Spirit, and those both of the six holy Ecumenical Councils and of the ones assembled regionally for the purpose of setting forth such edicts, and of those of our holy Fathers.” Thus by the seal of these three Ecumenical Councils, the 4th, 6th and 7th, we can set forth the contents of Holy Scripture, as in the table below.
Because the six scripture source lists vary in book order and content, it was necessary to either choose a precedence in order to compare and integrate them, or choose some other approach. After considering various options, for the purposes herein, it was decided that the order presented in Codex Alexandrinus would be used. This manuscript is thought to date from the late 4th or early 5th century. (Codex Alexandrinus contains the "Epistle of Athanasius on the Psalms to Marcellinus," and so it cannot be dated earlier than A.D. 373, the year he died (terminus post quem). Furthermore, since the manuscript does not contain textual apparatus found in later manuscripts—such as the prefaces or chapter divisions in the Acts and Epistles which are attributed to Euthalius, Bishop of Sulci—it is likely to have been produced before the last half of the fifth century (terminus ad quem).) Of all the ancient Bible texts (cf. Codex Sinaiticus

), it is the most complete in terms of both the Old Testament (LXX or Septuagint) and New Testament books.

Given this Bible Canon list, it is also a fair question to ask "what resources (e.g., printed Bibles) are available for the Orthodox who are only proficient at reading English?"

NOTES:
1. "yes" means that the book was obviously referred to, even if not explicitly (i.e., a reference to the 14 epistles of St. Paul is understood as referring to the 14 epistles commonly accepted as being his, and not some mix of 14 others otherwise unknown or defined).


2. "implied" means that it has been interpreted that the author was using a collective title otherwise understood to include the works in a certain category (e.g., when St. Gregory refers to the "Acts of the Kings" under two books he is referring to 1, 2, 3, and 4 Basileion as explicitly evidenced in other authors, or when the prophet Ieremias (Jeremias) is referred to evidence suggests that this is inclusive of all his works).


3. "permissible" refers to the end of the Old Testament list of books in Apostolic Canon LXXXV where it states: "outside of these it is permissible for you to recount in addition thereto also the Wisdom of very learned Sirach by way of teaching your younger folks." This suggests that Sirach may be a different class of book from the rest of those called "venerable and sacred," but not explicitly so. Cf. note 8 below.


4. "prescribed" refers to the following statement of St. Athanasios made near the end of his Scripture list: "Nevertheless, for the sake of greater exactness, I add also this, writing as I do the fact as a matter of necessity, that there are also other books than these outside of the list herein given, which, though not canonically sanctioned, are to be found formally prescribed by the Fathers to be read to those who have just joined and are willing to be catechized with respect to the word of piety, namely: the Wisdom of Solomon; the Wisdom of Sirach; and Esther, and Judith, and Tobias; and the so-called Didache (i.e., salutary teaching) of the Apostles, and the Shepherd."


5. "some approve" is a pointer to the statement made by St. Amphilochios that "As for the Book of Revelation of John again, Some approve it, but at least a majority call it spurious." Yet note that this statement is followed by “This should be a most truthful canon of the God-inspired Scriptures,” suggesting that he accepts the book. It might also be noted that St. Gregory eventually came to think of the Apocalypse with some regard, for "in the constituent address which he made to the one hundred and fifty bishops composing the Second Ecumenical Council he expressly mentioned it, saying 'For I am persuaded that other ones (i.e., angels) supervise other churches, as John teaches me in Revelation.'" (Rudder, p. 153)


6. Although the table index from Codex Alexandrinus presented above uses the word "Psalms," the codex actually contains a Psalter. Interestingly, two of the canon lists also make reference to a "Psalter" and not just "Psalms" (the Apostles and Carthage).


7. Codex Alexandrinus aligns up surprisingly well against the composite list provided above; only 4 Maccabees and the Psalms of Solomon are outside of the canonical scripture lists. However, this is not quite the whole story. The Apostles canon includes "the Injunctions addressed to you Bishops through me, Clement, in eight books, which ought not to be divulged to all on account of the secret matters they contain." To this could be added two of the "prescribed" books of St. Athanasios: "the so-called Didache (i.e., salutary teaching) of the Apostles, and the Shepherd." However, "As for the Injuctions of the Apostles, which are also called the Didache of the Apostles by St. Athanasius the Great, they were rejected by c. II of the 6th Ecumenical Council, on the ground that they had been garbled by heretics." (Rudder, p. 153) So while we might wonder why Codex Alexandrinus did not contain the Injunctions(e.g., was it already recognized that it had "been interpolated long ago by the heterodox" and so not included?), it is not important for purposes herein. In terms of the Shepherd, "this was a book which has not been preserved to our times." (Ibid.) There is extant a Shepherd of Hermas, or The Shepherd, from Codex Sinaiticus; however, it is not at all clear that this is one and the same document. The one referred to by St. Athanasius is apparently in some way related to a discouse by John of Climax, and is referred to by St. Maximus in his scholia on divine Dionysius. (Ibid.) The Rudder here also makes mention that this Shepherd is the work of Quartus, one of the seventy Apostles, and not Hermas as the title and the Muratorian fragment (2nd c. AD) give credit to. Until such confusion is sorted out (if it be possible), it is best to continue to consider that this book "has not been preserved" (the Shepherd of Hermasincludes heretical ideas such as those related to adoptionism).


8. The order of the New Testament books of the Evangleistarion

as found in the Codex Alexandrinus follows that presented by St. Athanasios. It also follows that of Laodicea, with the exception of the addition of the Apocalypse. It does not, however, preferentially follow the order of books in the Old Testament of any of these references (basically, all of the Prophets have been shifted to follow after the historical books.


9. NONE of the books identified as Scripture by any of the six witnesses presented above (even if just "prescribed" or "permissible" like Sirach) should be identified as Apocrypha or Deuterocanonical as the Protestants or Latins are wont to do. Consider the words of St. Athanasios: "And yet, dear readers, both with those canonically sanctioned and these recommended to be read, there is no mention of the Apocrypha; but, on the contrary, the latter are an invention of heretics who were writing them as they pleased, assigning and adding to them dates and years, in order that, by offering them as ancient documents, they might have a pretext for deceiving honest persons as a consequence thereof." Yes, there are Apocryphal writings, and while they may include 4 Maccabees

and the 18 Psalms of Solomon

as found in Codex Alexandrinus

, they do not include any of the other books found in the table above.