The Three Youths in the Fiery Furnace: Shadrach, Meshach and Abednego, Saved by God the Son 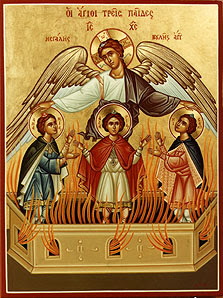 In Christianity and Judaism, Shadrach, Meshach and Abednego are well known from the biblical Hebrew book of Daniel Chapters 1 – 3, for their exclusive devotion to their God, having been safely delivered by their God from the Babylonian execution of being burned alive in a fiery furnace.

Shadrach, Meshach and Abednego were three young Jews, of royal or noble birth from the Kingdom of Judah, who were inducted into Babylon when Jerusalem was occupied by the Babylonians in 606/605 BC, under the campaign of Nebuchadnezzar II, during the first deportation of the Israelites.

These three young men were very dear to Daniel, whose Chaldean name was Belteshazzar, a peer who spoke highly of the three to the King whenever opportunity afforded itself, so that they could also have honorable positions in the Province of Babylon.

In Daniel (Daniy'el) Chapter 1, King Nebuchadnezzar wanted select men from Judah to learn the language and literature of Babylon. This would be a three-year training course to qualify those select to serve in the King’s Palace. Those chosen were to partake of Babylonian royal food and wine. [v.3-5] Among these men of Judah were Daniel (Belteshazzar), Shadrach, Meshach and Abednego. [v.6, 7] Because Daniel did not want to defile himself with the King’s food, he requested from his appointed guard to provide them vegetables and water for ten days. After the ten day trial, the four appeared better nourished and healthier than all the others who partook of the royal food. Thus they were awarded the freedom to regularly have vegetables and water. [v.8-16] Upon the King’s review, he also found them to be “ten times better than all the magicians and conjurers who were in all his realm”.

In Daniel Chapter 3, Shadrach, Meshach and Abednego were sent into a blazing fiery furnace because of their stand to exclusively serve their God alone. By the Son of God in the form of an angel, they were delivered out of harm’s way from this order of execution by the King of Babylon.

The story takes place during the reign of King Nebuchadnezzar II of Babylon, who had a nine-story high statue made of gold erected in the plain of Dura[v.1] (The region around present day Karbala, Iraq). The statue was either an image of himself or possibly of the Babylonian god of wisdom, known as Nabu. When the project was complete, he prepared a dedication ceremony to this image ordering all surrounding inhabitants to bow down and worship it. The consequence for not worshiping the idol, upon hearing the queue of instruments, was execution in a fiery furnace.[v.2-9] During the dedication ceremony, certain officials noticed Shadrach, Meshach, and Abednego not bowing down to the idol. Thus, Nebuchadnezzar was immediately notified.[v.10-12]

The King was enraged and demanded that these three men come before him.[v.13] Nebuchadnezzar knew of these very men, because it wasn’t too long ago when Daniel had petitioned the King to assign Shadrach, Meshach and Abednego over the affairs of the province of Babylon.[Daniel 2: 48, 49] Daniel was also very special to the King because he was able to interpret his dreams unlike any of the Chaldean wise men.[Daniel 2: 24, 25] So it is of no surprise that the King would offer one more chance for these three Jews, who held honorable positions to the King, to show their patriotism to Babylon.[v.14, 15]

Their response: "O Nebuchadnezzar, we do not need to defend ourselves before you in this matter. If we are thrown into the blazing furnace, the God we serve is able to save us from it, and he will rescue us from your hand, O king. But even if he does not, we want you to know, O king, that we will not serve your gods or worship the image of gold you have set up."[v.16-18]

Nebuchadnezzar demanded that the execution furnace be heated seven times hotter than usual. Valiant soldiers of the King’s army were ordered to firmly bind the fully clothed Shadrach, Meshach and Abednego and cast them in the blazing furnace. Upon approaching the mouth of the furnace, the fire was so hot that the soldiers perished while attempting to throw in the three tightly bound Jews (who then fell in).[v.19-23]

The SOn of God in the form of an angel immediately came to deliver the three men from the furnace releasing them from their ties. When the King saw what appeared to be four men in the furnace, unbound and walking about, he called to them to come out. King Nebuchadnezzar then acknowledged the power of their God, even going as far as to make a decree, whereby any nation who says anything against the God of the Jews is an act of war. Shadrach, Meshach and Abednego were then given promotions to their positions over the province of Babylon.[v.24-30]

In the "Prayer of Azariah", passage of the Septuagint, Azariah (Abednego) confesses their sins and the sins of Israel, and asks their God to save them in order to demonstrate God’s power to the Babylonians. It is followed by an account of an angel who came to make the inside of the furnace feel like a cool breeze over dew. An extended hymn of praise to their God for deliverance is found in the "Song of the Three Young Men".

In view of the possible foreign religious connotations attached to their names, commentators have questioned why the Bible seldom uses their original Hebrew names. It is speculated that they are identified mostly by their Chaldean names to maintain the accuracy of the dialogue given in the text. Since it would have been confusing to have the writer call them one thing and the King call them another, the story primarily uses their Chaldean names instead.

Hananiah is a Hebrew name that means "God who is gracious". Misha'el means "Who is like God?” and it also means "to feed" or "to provide" as in how a husband provides for his family. The Hebrew name Azariah appropriately means "God has helped".

It has been asserted that Shadrach, Meshach, and Abednego's names all pertained to pagan Babylonian gods. Shadrach possibly is derived from Shudur Aku "Command of the moon god". Meshach is probably a variation of Mi•sha•aku "Who is what Aku is?", an interesting twist from the Hebrew name Mishael “Who is like Yahweh?” Abednego is either a corrupted or deliberate use of Abednebo, "servant of Nebo/Nabu," or Abednergo, a variation of Abednergal, "servant of the god Nergal."

The song of the three youths is alluded to in odes seven and eight of the canon, a hymn sung in the matins service and on other occasions in the Eastern Orthodox Church, where their feast day is December 17 (along with Daniel). The Orthodox also commemorate them on the two Sundays before the Nativity of Christ. The reading of the story of the fiery furnace, including the song, is prescribed for the vesperal Divine Liturgy celebrated by the Orthodox on Holy Saturday. Likewise, the three are commemorated as prophets in the Calendar of Saints of the Lutheran Church on December 17 with Daniel.

The winter time can bring brutal weather. Especially in your part of the country. That wonderful that you got
a new furnace. I bet your house is all warm and toasty now.