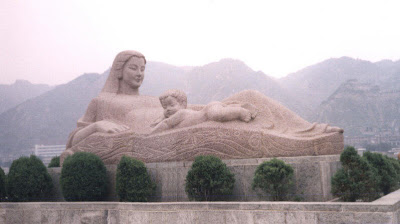 * 1/1 to 1/6: Shogatsu/Shinto New Year's Festival--The Kami (Nature Spirits) of the four directions are honored, and prayers for happiness, good health, and prosperity are made. [a/k/a Shihohai, Genshisai, Shinnen-enkai]


* 2/3: Setsuban-Sai--Shinto rite in which good fortune is invoked and evil exorcised. Shinto try to live in harmony with the cosmic forces of the Kami. [a/k/a Bean-Throwing Festival, Turn of the Seasons Festival]


* 2/17: Toshigoi--Shinto rite honoring the Kami and offering prayers for a bountiful rice harvest. The Kami are manifestations of the one universal, primordial and eternal, immanent and transcendent Deity, Kuni-Tokotachi-no-Kami. [a/k/a Kinensai]


* 3/21: Taoist festival honoring the Shen (Deities) of Water, East, and Spring; prayers are made for growth. Taoists believe the unity of Yin (Eternal Feminine) and Yang (Eternal Masculine) make up the psyche-matter-energy of the eternal all-encompassing Ch'i.


* 6/21: Taoist festival honoring Shang-Ti/Heavenly Emperor, Father of Justice and Law, and manifestation of the Te (Virtuous Inner Power). Also celebrates the peak of the masculine Yang half of the year and the Shen of Fire, South, and Summer; prayers are made for strength and maturity, and offerings are made to the ancestors.


* 9/5 to 9/11: Paryusana--Jain festival of recitation of holy scripture, fasting, self-discipline, introspection, and reserve. Jainas grant forgiveness to others, ask forgiveness of others for harm done, whether knowingly or unknowingly, during the past year, and make vows to avoid causing future harm. The festival ends with a communal meal. [a/k/a Paryusan, Paryushan, Paryushan Parva, Paryushan Mahaparva, Pajjusan] [Ends at Samvatsari a/k/a Samvatatsari]


* 9/23: Taoist festival honoring the Shen of Winds, West, and Autumn; thanksgiving is made for the harvest. Taoists live simply, respect life, and recognize the equality of all.


* 9/28: Birthday of Confucius (K'ung Fu-Tzu) (551 BCE). He taught that societal harmony could be realized when individuals acted with loving care for family, concern for friends and neighbors, benevolence to strangers, and respect for all. [Founder of Confucianism.] [Death day 11/29/479 BCE]


* 10/17: Shukaku Matsuri--Shinto rite offering thanks and first fruits of the rice harvest to the Kami. [a/k/a Kannamesai, Harvest Festival]


* 12/22: Taoist festival honoring Wang-Mu/Empress Mother, Mother of Compassion and Wisdom, and manifestation of the Tao (Cosmic Power of Creation and Destruction). Also celebrates the peak of the feminine Yin half of the year and the Shen of Earth, North, and Winter; prayers are made for rest and renewal, and offerings are made to the Cosmos.


* 12/22: Tohji-Taisai--Shinto rite honoring Sun Goddess Amaterasu. Storm God Susano-o angered Her, and She withdrew into a cave until enticed out with music and dance.


[Jainism was founded by Mahavira Vardhamana Jnatrputra in 6th Century BCE India. Jainism is an ascetic religion in which the primary mandate is ahimsa (harmlessness) and the goal is to free the soul from the material existence accumulated from karma. The holy scripture of the Jainas include the Angas (Sermons and Dialogues of Mahavira) and the Digambara Texts. There are two monastic denominations of Jainas: the Svetambara and the Digambara. The former includes orders of women and recognizes spiritual equality; the latter eschew orders of women and clothing. Lay Jainas venerate the Tirthankaras (24 great Jain teachers) at Jain temples. Jain festivals and the Jain calendar (Vir Samvat) are based on the Indian lunisolar calendar (Bikrami calendar or Vikram Samvat). Some Jainas outside of India date the Jain holidays based on the Moon in India, while others date the Jain holidays based on the Moon at their respective locations. Consequently, some Jainas in the United States and Canada may celebrate some of these holidays 1 day before the Indian celebration.]


[Taoism (Daoism) was founded in 3rd Century BCE China by Lao-Tzu. Taoism is a philosophical and spiritual system grounded in Nature and its rhythms. Taoist holy scripture is called the Tao Tsang. It includes the Tao-Te Ching and over a thousand other writings. Taoist holidays and the Taoist calendar are based on the Chinese lunisolar calendar. Chinese religion is a fusion of Taoism and Confucianism, and most Chinese also practice Chinese Mahayana Buddhism.]


[Confucianism was founded in 6th Century BCE China by Confucius (K'ung Fu-Tzu). Confucianism is a philosophical system focused on ethics and social structure.]


[Shinto (Shintoism) originated in Japan. Shinto is grounded in Nature and its rhythms. Shinto practitioners make daily offerings and prayers at home shrines and attend regional or national Shinto Shrines on annual festival days. Though Shinto holidays were previously based on a lunar calendar, the Shinto calendar is now based on the Gregorian calendar, which has been adopted in Japan. Most Japanese practice both Shinto and a form of Mahayana or Tantric Buddhism.]