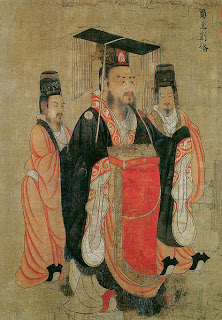 Liu Bei grew up in a poor family, having lost his father when he was still a child. To support themselves, Liu and his mother sold shoes and straw-woven mats. At the age of fourteen, Liu Bei, sponsored by a more affluent relative who recognised his potential in leadership, went to study under the tutelage of Lu Zhi (a prominent scholar and, at the time, former Administrator of Jiujiang). He met and befriended Gongsun Zan (a prominent northern warlord in future) there.

The adolescent Liu Bei was said to be unenthusiastic in studying and displayed interest in hunting, music and dressing. Few of words, calm in demeanor, and kind to his friends, Liu Bei was well-liked by his contemporaries. He was said to have long arms and large earlobes.

Liu Bei, a compassionate and righteous leader, an embodiment of natural charisma (called de in Chinese) built his kingdom on the basis of Confucian values. Liu Bei was related to the ruling family of the Han Dynasty. Liu Bei, Guan Yu and Zhang Fei who, having met by chance in the county of Zhuo in 184, found that all three shared the same desire to serve the country in the tumultuous times. They swore to be brothers the next day in Zhang Fei's backyard, which was a garden full of peach blossoms. Liu Bei was ranked the eldest, Guan Yu the second, and Zhang Fei the youngest. Having done this, they recruited more than 300 local men, acquired horses, forged weapons and joined the resistance against the Yellow Turban rebels.

Bei is worshipped as the patron of shoemakers in Chengdu, which is also known as the "City of Shoes", as more than eighty million pairs of shoes totaling five billion yuan in sales are manufactured there annually. It is said that in 1845, during the reign of the Daoguang Emperor, the shoemakers guild in Chengdu, who called themselves disciples of Liu Bei, sponsored the construction of the Sanyi Temple (三義廟) in Liu Bei's honor. After being relocated many times, the temple can be found in Wuhou District today. Since Mainland China loosened its control on religious practices in recent years, the worship of Liú Bèi among shoemakers has again gained popularity in Chengdu. In 2005, a large procession was carried out in front of the Sanyi Temple to commemorate Liu Bei—the first such event since the founding of the People's Republic of China.

A commentary carried by the Yangtse Evening News (揚子晚報) criticized such practice as mere commercial gimmickry to exploit the fame of Liu Bei. It argued that although Liu Bei sold straw-woven shoes and mats for a living when he was young, he was hardly the inventor of shoes. According to legend, it was Yu Ze (于則) who made the first pairs of shoes with softwood during the time of the Yellow Emperor. However, the criticism did not dampen the enthusiastic shoe industry owners in their decision to erect a statue of Liu Bei in the West China Shoe Center Industrial Zone in Wuhou District.
at 00:12