The Lunar New Year and the Traditions It Represents 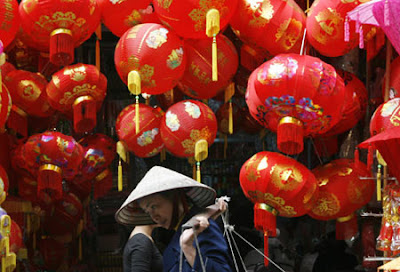 There are many interesting, and frequently overlooked, similarities between the civilisations of the Chinese and Roman Empires. To the extent that the Orthodox Church is the heritor and protector of the civilisation of the Roman, and subsequently Byzantine, Empire, the similarities are of particular interest to Orthodox Christians.

The Chinese Emperor unified in one person two lines of authoriity: he was the embodiment of fatong (de jure authority to rule); he was also the living symbol of daotong (moral or religious correctness). Under the Mandate of Heaven, he ruled what was for his peoples the known civilized world, and was regarded as no mere mortal. For him there was no equal in the world.

The Caesars saw themselves in a similar light. They titled themselves imperator of the world. When they became Christian they quickly embraced the caesaropapist approach to governance, becoming the final authority in matters secular as well as ecclesiastical.

In successive Chinese dynasties the Calendrist was always one of the more important imperial ministers. In the Christian world, in the course of the ebb and flow of imperial influence, the authority to define the calendar rested in the hands of the claimants to the succession of the Caesars - be they emperors residing in Byzantium or Moscow, or bishops in Rome.

This last is a particularly poignant point for some Orthodox people, because the recognition of differing calendar-issuing authorities continues to be a divisive issue for the church, and affects our lives to this very day.

The Confucianist calendar, predicated on the movements of the moon rather than the sun, comprises 12 months. In a leap year there are 13 months. The first day of the first month of the year usually falls in late January or in February. The coming lunar New Year's Day will fall on 28th January, 1998.

It is important to remember that the lunar calendar is prevalent in most parts of the Confucianist family of nations, so it would be technically wrong to call it Chinese New Year. Historians and veterans of the Vietnam War will recall that it is called "Tet" in Vietnam (as in the "Tet Offensive"). It is also widely celebrated in Korea. The notable exception is Japan, where the lunar calendar remains part of the cultural pattern but is not observed. About 100 years ago, during the Meiji Restoration in Japan, the entire Japanese nation consciously switched over to following the Gregorian calendar. The traditional celebrations of the lunar new year became attached to the new year by the Gregorian calendar; hence Japanese ladies today will put on their kimonos and go to temples for prayers on 1st January, while in other Confucianist countries, including Hong Kong, people continue to observe the traditional ceremonies on lunar New Year's Day, sometime in February or late January.

It is a commonplace in the Western world that Chinese years have animal names (Mouse, Ox, Tiger, Rabbit, Dragon, Snake, Horse, Ram, Monkey, Chicken, Dog, Hog), just as Chinese restaurants serve fortune cookies. This is a facile understanding. The 12-animal cycle of years is a folkloric tradition. What is not widely known in the West is that lunar years do have proper names. The names are generated by the sequential juxtaposition of two groups of Han characters . The Han-character writing system bound together the Confucianist world in the same way Latin bound together Christendom in the West, so the proper name of each year is the same in China, Vietnam, Korea and Japan. There is a total of 60 names. The current year is known as Dingqiu (Cantonese Ting Chau), and the year coming in on 28th January is Wuyin (Cantonese Mo Yan).

The first day of the lunar new year is a day of religious rituals and abstinence. It is interesting to note that in popular religion in China the pantheon is a combination of Buddhist, Taoist and traditional deities and powers, which means it is appropriate to make meat offerings to some deities but not to others. Meat offerings such as suckling pig, chicken and barbecued pork may be made to ancestors and certain deities, but never to the Buddha, boddhisattvas, arhats and other Buddhist powers, who are strictly vegetarian. As a matter of general practice, most Chinese abstain from meat on the first day of the lunar year, a sign of deference to spiritual values. The second day, kai nian day (day of commencement of the year) is the day of feasting, the real beginning of the year, when people put behind them the religious observations of the first day and end their abstinence.

It is customary for Chinese people to visit their relatives and friends, particuarly those senior to them, during the lunar new year period, within the first ten days of the new year. Hongbao, or red packets containing money for goodwill and good luck, are given to one's juniors. The seventh day of the lunar new year, ren ri or All Man's Day (or, to be politically correct, All Humans Day) is regarded to be of particular importance, because legend has it that man was born, or made, on that day - everybody's birthday. Lunar new year celebrations generally end after the Yuanxiao, literally "first evening", festival, which falls on the 15th day of the lunar new year. The "first evening" festival is called such because it is the first evening of the full moon in the year, and is celebrated traditionally by a display of numerous Chinese lanterns in various styles.
at 09:38