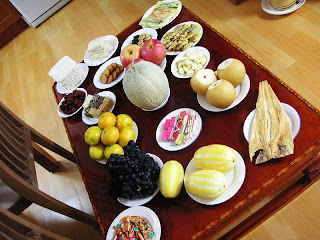 (月見) or Otsukimi, literally moon-viewing, refers to Japanese festivals honoring the autumn moon. The celebration of the full moon typically takes place on the 15th day of the eighth month of the traditional Japanese lunisolar calendar; the waxing moon is celebrated on the 13th day of the ninth month. These days normally fall in September and October of the modern Gregorian solar calendar

The Tsukimi custom originated from the Chinese Mid-Autumn Festival

. The tradition is now so popular in Japan that some people repeat the activities for several evenings following the appearance of the full moon during the eighth lunisolar month.

Tsukimi traditions include displaying decorations made from Japanese pampas grass

Tsukimi refers to the Japanese tradition of holding parties to view the harvest moon. The custom is thought to have originated with Japanese aristocrats during the Heian period, who would gather to recite poetry under the full moon of the eighth month of the lunisolar calendar, known as the "Mid-Autumn Moon." Since ancient times, Japanese people have described the eighth lunisolar month (corresponding to September on the contemporary Gregorian calendar) as the best time for looking at the moon, since the relative positions of the earth, sun, and moon cause the moon to appear especially bright. On the evening of the full moon, it is traditional to gather in a place where the moon can be seen clearly, decorate the scene with Japanese pampas grass, and to serve white rice dumplings (known as Tsukimi dango), taro, edamame, chestnuts and other seasonal foods, plus sake as offerings to the moon in order to pray for an abundant harvest. These dishes are known collectively as Tsukimi dishes (月見料理 tsukimi ryouri). Due to the ubiquity of sweet potato or taro among these dishes, the tradition is known as Imomeigetsu (芋名月) or "Potato harvest moon" in some parts of Japan.

From 862 until 1683, the Japanese calendar was arranged so that the full moon fell on the 13th day of each month. In 1684, however, the calendar was altered so that the new moon fell on the 1st day of each month, moving the full moon two days later, to the 15th day of the month. While some people in Edo (present-day Tokyo) shifted their Tsukimi activities to the 15th day of the month, others continued to observe the festival on the 13th day. Furthermore, there were various regional observances in some parts of Japan on the 17th day of the month, as well as Buddhist observances on the 23rd or the 26th day, all of which were used as pretexts for often late-night parties during the autumn throughout the Edo period. This custom was brought to a swift end during the Meiji period.

Festivals dedicated to the moon have a long history in Japan, dating as far back as the Jomon period. During the Heian period elements of the Chinese Mid-Autumn Festival were introduced to Japan. Members of the aristocratic class would hold moon-viewing events aboard boats in order to view the moon's reflection on the surface of the water. The writing of tanka poetry was also an element of such mid-autumn moon viewing festivities.

It is traditional to serve Tsukimi dango and seasonal produce offerings during Tsukimi, as described above. In addition, there are several other dishes associated with Tsukimi.

and raw egg, then covered with broth are known as Tsukimi soba or Tsukimi udon. In Kitakyushu an egg served atop yaki udon is known as Tenmado, another name for Tsukimi in the local dialect.

At some fast food restaurants in Japan a special Fall Menu is offered during September and October featuring fried egg sandwiches known as Tsukimi burgers.
Chuseok (Korean: 추석), originally known as Hangawi (한가위) (from archaic Korean for "great middle"), is a major harvest festival and a three-day holiday in Korea celebrated on the 15th day of the 8th month of the lunar calendar. Like many other harvest festivals, it is held around the Autumn Equinox. As a celebration of the good harvest, Koreans visit their ancestral hometowns and share a feast of Korean traditional food.

Historically and according to popular belief, Chuseok originates from Gabae started during the reign of the third king of the kingdom of Silla

(57 BC - AD 935), when it was a month-long weaving contest between two teams. Come the day of Gabae, the team that had woven more cloth had won and was treated to a feast by the losing team.

Many scholars also believe Chuseok may originate from ancient shamanistic celebrations of the harvest moon. New harvests are offered to local deities and ancestors, which means Chuseok may have originated as a worship ritual. In some areas, if there is no harvest, worship rituals are postponed, or in areas with no annual harvest, Chuseok is not celebrated.

In modern South Korea, on Chuseok there is a mass exodus of Koreans returning to their hometowns to pay respects to the spirits of one's ancestors. People perform ancestral worship rituals early in the morning. They often visit the tombs of their immediate ancestors to trim plants and clean the area around the tomb, and offer food, drink, and crops to their ancestors. Harvest crops are attributed to the blessing of ancestors.

(송편), a crescent-shaped rice cake which is steamed upon pine needles. Other dishes

A variety of folk games are played on Chuseok to celebrate the coming of Autumn and rich harvest. Village folk dress themselves to look like a cow or a turtle, and go from house to house along with a Nongak band playing music. Other common folk games played on Chuseok are tug of war, ssireum, archery and gama fighting. Folk games also vary from region to region. Ganggangsullae

dance which is forming a circle under a moon is performed by women and children in southwestern coastal regions, and cockfight or bullfighting in the southern regions.
The moon festival

will occur on these days in coming years: