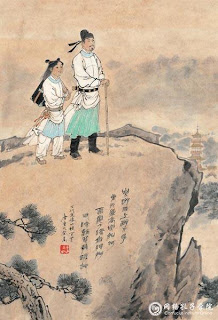 According to the I Ching, nine is the yang number; the ninth day of the ninth lunar month (or double nine) has too much yang (a traditional Chinese spiritual concept) and is thus a potentially dangerous date. Hence, the day is also called "Double Yang Festival" (重陽節). To protect against the danger, it is customary to climb a high mountain, drink chrysanthemum wine, and wear the zhuyu (茱萸) plant, Cornus officinalis. (Both chrysanthemum and zhuyu are considered to have cleansing qualities and are used on other occasions to air out houses and cure illnesses.) Also on this holiday, some Chinese also visit the graves of their ancestors to pay their respects.

It is said that in the ancient China, probably in the Han dynasty, on the 9th day of the 9th lunar month, the emperor and his attendants would wear the zhuyu plant, eat rice cakes and drink chrysanthemum wine to dispel bad omens and pray for longevity. But afterwards, the empress of Han GaoZu (the emperor) killed his lover Mrs Qi cruelly. Consequently, Qi's attendant, a girl, was dismissed from the palace and married a civilian, so the custom in the palace was in circulation.

In 1966, the Republic of China (Taiwan) rededicated the holiday as "Senior Citizens' Day", underscoring one custom as it is observed in China, where the festival is also an opportunity to care for and appreciate the elderly.

Double Ninth may have originated as a day to drive away danger, but like the Chinese New Year, over time it became a day of celebration. In contemporary times it is an occasion for hiking and chrysanthemum appreciation. Stores sell rice cakes (糕 "gāo", a homophone for height 高) inserted with mini colorful flags to represent zhuyu. Most people drink chrysanthemum tea, while a few strict traditionalists drink homemade chrysanthemum wine. Children in school learn poems about chrysanthemums, and many localities host a chrysanthemum exhibit. Mountain climbing races are also popular; winners get to wear a wreath made of zhuyu.


There is an often-quoted poem about the holiday:

As a lonely stranger in a strange land,

At every holiday my homesickness increases.

Far away, I know my brothers have reached the peak;

They are planting flowers, but one is not present.