The Dragon and the Phoenix 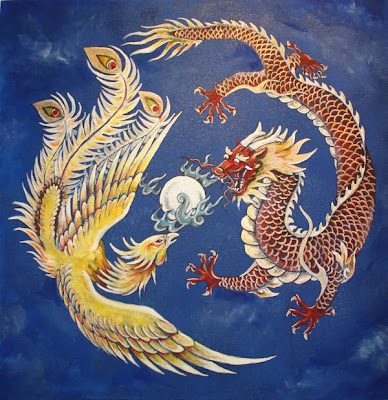 In China, the dragon and the phoenix are traditional animals symbolic of auspiciousness. Along with the lin/kirin (white tiger) and the tortoise, they were known as the "Four Supernatural Spirits." According to ancient records, the dragon appeared in a magical variety of forms. It could be long or short, small or gigantic. It could be both secretive yet active, and it also inhabited everywhere from the heights to the depths. Traveling between the skies and earth, dragons were considered the mounts of heavenly deities. They also had the power to control rain. During times of drought, dragons could bestow precious water, and in times of flood, they could stop the rain and clear the skies.

The dragon and the phoenix are the principal motifs for decorative designs on the buildings, clothing and articles of daily use in the imperial palace. The throne hall is supported by columns entwined by gilded dragons, the central ramps on marble steps were paved with huge slabs carved in relief with the dragon and phoenix, and the screen walls display dragons in brilliant colours (such as the Nine-Dragon Screen in Beihai Park). The names in the Chinese language for nearly all the things connected with the emperor or the empress were preceded by the epithet "dragon" or "phoenix"; thus, "dragon seat" for the throne, "dragon robe" for the emperor's ceremonial dress, "dragon bed" for him to sleep on, and "phoenix carriage", "phoenix canopies" and so on for the imperial processions. The national flag of China under the Qing Dynasty was emblazoned with a big dragon. The earliest postage stamps put out by China were called "dragon-heads" because they showed a dragon in their designs. Even today the dragon is sometimes adopted as the symbol of Chinese exhibitions held abroad or the cover designs of books on China printed by foreign publishers. "The Giant Dragon of the East" is becoming a sobriquet for the country.

Belief in the dragon, and drawings of the imaginary animal, can be traced back to primitive society when certain prehistoric tribes in China adopted the dragon among other totems as their symbol and guardian. Some of the recently unearthed bronze vessels of the Yin Dynasty, which existed more than 3,000 years ago, are decorated with sketches of dragons of a crude form. Earliest legends in China described the dragon as a miraculous animal with fish scales and long beards. As time went on, it became more and more embellished in the minds of the people, acquiring the antlers of the deer, the mane of the horse and the claws of the eagle -- in short, appropriating the distinctive features of other creatures until it became what we see today everywhere in the palace.

The Chinese phoenix, Sovereign of all birds, it has the head of the golden pheasant, the beak of the parrot, the body of the mandarin duck, the wings of the roc, the feathers of the peacock and the legs of the crane; gloriously beautiful, it reigns over the feathered world. An early design of the phoenix can be seen on the silk painting discovered in a tomb of the Warring States Period (475-221 B.C.) near Changsha in Hunan Province.

The phoenix was commonly referred to as the "King of Birds." A supernatural bird, it embodied the five virtues of benevolence, righteousness, propriety, wisdom, and sincerity. As such, it harmed neither a single insect nor blade of grass. It perched only in the finest firmiana tree, eating and drinking nothing but bamboo seeds and sweet spring water. Therefore, any reported sighting of a dragon and a phoenix was considered an extremely auspicious sign, said to herald a glorious period of peace and prosperity for the people and the country. This is reflected in the Chinese saying, "When the dragon soars and the phoenix dances, the people will enjoy happiness for years, bringing peace and tranquility to all under heaven."

The dragon and the phoenix often served in classical art and literature as metaphors for people of high virtue and rare talent or, in certain combinations, for matrimonial harmony or happy marriage. As an important part of folk arts, dragon lanterns, dragon boats, dragon and phoenix dances are still highly popular on festivals among the people of all localities.

The dragon and the phoenix, in addition to serving as auspicious symbols, were often metaphors in ancient China for the gentleman and the sage. For example, Confucius reportedly compared Lao-tzu to a dragon; both reserved yet elusive spirits capable of freely transcending the boundaries of heaven and earth. Lao-tzu is also said to have compared the wisdom and grace of Confucius to the lofty virtues associated with the phoenix; both took benevolence as the ultimate virtue in treating others. Consequently, we know from ancient texts and artifacts that the dragon and the phoenix were auspicious animals as early as the Neolithic age in China. Highly revered and appreciated, images of dragons and phoenixes found their way onto ceremonial jade ornaments and were carved, painted, or sewn onto objects of everyday use--representing reverence for the spirits and desire for auspicious fortune. This custom was passed down through the ages. From references of dragons and phoenixes in local festivals and rites to the heights of literature and fine art, they all reveal the glory of these legendary animals.

Ever since the Ch'in dynasty (221-206 B.C.), when the First Emperor of China proclaimed himself descendant of the dragon, almost every ruler was referred to as "The True Dragon, Son of Heaven." The dragon thereby became a symbol of the ruler, while the phoenix became an embodiment of his mate. The forms of the dragon and phoenix were transformed gradually into images associated with the court, representing imperial nobility and authority. Almost everything related to the court, from the decoration of palace architecture down to the insignia on everyday objects and clothing--even covers and cases for books--were adorned with images and patterns bearing imperial dragons and phoenixes. These appear in a variety of materials, ranging anywhere from jade to paper. Even in the same medium, they take on different appearances, such as the case with paintings in monochrome ink or color. Of every imaginable type and pose, dragons and phoenixes not only serve as decoration, but also seem to come alive, making them "true" treasures of ancient Chinese arts and crafts.

The core of the National Palace Museum collection is based on the treasures assembled by the Ch'ing court, and many are adorned with or depict images of dragons and phoenixes. The year 2000 not only designated a new millennium, but it also coincides with the Year of the Dragon in the Chinese lunar calendar. In celebration, the Museum has selected from the collection more than 60 works of different artistic media for a special exhibition of the dragon and the phoenix. It was hoped that these all-mighty dragons and virtuous phoenixes will combine their power and virtue to bless the land and usher in a new era for the people and the country.
at 01:28

Hi, love the picture is the top of your post. You didn't happen to have a credit for it did you?