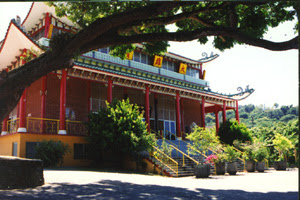 While most of the world's great religions rely on the sanctity of words to convey the Truth of their religious doctrines, moral codes, etc., Zen Buddhism makes no such claim as it has no such written document or collection of documents. Instead, Zen Buddhism relies on the concept of Dharma Transmission to "preserve" the teachings of the Buddha. We conceive that the nature of Ultimate Reality is received by us as a "transmission" -- a transmission with no relevance to written or spoken language -- and that this Ultimate Reality is identical to the Mind of the Buddha.

Dharma Transmission can be a difficult concept to grapple with, especially as our entire lives revolve around language. We think with language, speak with language, and write with language -- basically, there's no way to escape language. Yet here is a religious sect that says there's no other way - we've got to put our thoughts aside entirely if we are to find our True Nature. We Buddhists consider the thinking mind to be a sense organ, on par with our senses of sight, sound, smell, taste, and our tactile sense. The senses do not define us; they are merely an aspect of our impermanent physical nature, temporary and always in flux. It is our True Self alone - our Buddha Nature - that is absolute, unchanging and infinite: to know this on a deeply intuitive level is to be enlightened.

How does Dharma Transmission happen? There are several interpretations. According to the few passed-down teachings we have from our dear friend, Shakyamuni Buddha, it happens through following the Eightfold Path which culminates in deep reflection and meditation. If we do the work, he said, enlightenment would follow: the essence of his teachings would be complete.

In this sense Dharma Transmission is an unfolding of the realization of Reality that takes place as we delve into the nature of our lives in a very deep way. When we enter the actual state of meditation our ego-self disappears -- our sense of personal identity vanishes. When we have experiences that lead to new awarenesses in this state, they seem to come "from out there somewhere". They are not from us, because we - our sense of personal self -- don't exist. The term "transmitted" seems perfectly natural to us. Where these realizations and experiences come from, we can't say.

In another way, the concept of Dharma Transmission has taken on other functions in the history of Buddhism - of maintaining a familial lineage to our founder, Mahayogi Gautama Siddhartha of the Shakya clan, of maintaining a hierarchical structure in temples and monasteries, and of empowering disciples to teach through the recognition of One Mind. These alternate uses of the terminology can still serve a practical purpose but should be considered separately from the spiritual essence of Dharma Transmission that happens through spiritual labor.

Maintaining Lineage
A follower of the Buddha Way may ask, how do we know if we have received the true Dharma? The true teachings of the Buddha? As we discussed, one way is by following the Buddha's Eightfold Path and experiencing enlightenment for ourselves. But another, and often more popular way in the history of Buddhism, is for our master or teacher to "transmit" the Dharma to us. The Dharma might also be transmitted to us during an ordination or other ceremony. All of these approaches appear to have been employed at various times in the past. It's interesting to note that few, if any, historians believe that the thread of Chan has been continuously "transmitted" in the person-to-person fashion. History bears witness to many breaks in lineages and improvised "recovery plans" attempting to reattach the various ends of broken threads. Despite controversy between historians and some monastics on this, the Dharma can be viewed to have been transmitted circumferentially behind the gaze of the Zen institutions by the practitioners themselves - by those people who sit in meditation behind closed doors in their homes or engage in practice throughout their family and work lives. These individuals have created, through the course of history, a complex intertwined web of connections that, though undocumented, can easily be imagined to date back to our founder.

Establishing Ecclesiastic Hierarchy
In some Buddhist organizations hierarchy is established through a formal ceremony intended to be symbolic of receiving Dharma Transmission. The monk or nun is thus elevated in status to lead a group of lay disciples who have not yet received the official "seal" of Dharma Transmission. Of course, problems with this occur all to frequently when this power is bestowed upon someone with less spiritual awareness than the title implies. I leave the details of such problems to Mr. Lachs to explore but will warn lay practitioners to proceed with care and common sense in their pursuit of the Dharma: cultivate great doubt, great faith in your abilities to commit to the Path, and great fortitude and perseverance. Don't rely on others to bring the Dharma to you. "To become a Buddha [Enlightened One]," Master Hsu Yun said, "is the easiest, most unobstructed task. Do it by yourself. Do not seek outside yourself for it."

Empowering Disciples to Teach
There are numerous instances in history when a student ripe for teaching needs a strong prod. He may shy away for feeling unqualified, unable, or unsure of him- or herself. She may actively avoid seeking clerical roles in a congregation. Yet such people may be the exact people who need to be guiding others because of their level of understanding, their compassion, and their humility. In such cases the Master/Dharma teacher may (and this often happens in private) "bestow" Dharma Transmission - a mutual recognition of One Mind -- upon the devotee as a way of letting him or her know that he recognizes her spiritual achievement and believes in her ability to protect and spread the Buddha Dharma. It is not something the devotee waves like a flag in self-aggrandizement to enlist awe from others or to gain congregants.

The history of Buddhist lineage, tied together with Dharma transmission, offers from a sociological and anthropological point of view a fascinating look into how societies and cultures can adapt to change despite tremendous obstacles. Buddhism has changed with the tides over the centuries by adapting or altering meanings of terminologies and, while this has sometimes posed significant problems for Buddhist institutions, it speaks to the adaptability of human nature and mankind's unfaltering quest for deeper understanding of himself. Dharma transmission is as valid today as it was a thousand years ago because of our need to feel the living pulse of Zen in our lives - on an unconscious level we recognize that we are a unitary whole, timeless and spaceless, as completely integrated with the Buddha's own life as with our own. And if we look deeper still, we find we are just as much a part of all the teachers that guided Siddhartha and of those that guided them, ad infinitum.

So while we might easily question the authenticity of Dharma transmission on some levels, there is nothing to question on the deeper levels - the fact that Chan Buddhism is alive today is testimony enough.