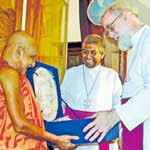 We need not enter into a dialogue with a Buddhist or a member of Islam to win or lose. Our intention ought to be that we will both win. It is highly doubtful, given the cultural context in which Buddhism exists, that such a dialogue will result in the baptism of many who were previously Buddhists. It is improbable that it will result in theological agreement between the representatives of two very disparate systems of belief. It is altogether possible, however, that in our point of contact we will find enrichment which will flow over into the beliefs of each religion...

Holmes and Westerhoff list these "points of contact" between the major world religions, as identified by Friedrich Heiler, a German historian of religion. The following are common beliefs held by Judaism, Islam, Zorastrianism Mazdianism, Hinduism, Buddhism, Taoism and Christianity:

1. A belief in the reality of the transcendent; the "holy other."

2. That the transcendent is immanent in human hearts.

3. This transcendent and immanent reality is the highest good.

4. The reality of the divine is ultimate love.

5. The way to God is through sacrifice.

6. In loving one's neighbor, one is loving God.

7. It is the love of God that leads to union with God.

An example of how to highlight these "points of contact" without compromising our own beliefs was recently offered by Rowan Williams, Archbishop of Canterbury in a greeting he offered to the Hindu community:

...The desire and the ability to celebrate is a profound part of the human personality and is a gift of God in creation. When celebration is from a perspective of love of God and is in thanksgiving for the blessings that we receive from God, then it is all the more to be welcomed and encouraged. I congratulate you on the way in which you have brought the celebration of the festival of Diwali to the communities of this country and have enabled the perspective of faith to be more widely appreciated.

The Hindu communities have brought so much to the life of this country, and in so many different aspects. In business, education, culture and religion, Hindus have led the way in demonstrating what it means to be a lively, integrated and distinctive community to the great benefit of all. It is my hope that especially at this time of year, this contribution should be more widely recognised and acknowledged.

Each of our festivals has its own distinctive character and meaning and is rooted in our respective understandings of the nature of God. But Diwali, coming as it does when Christians are approaching the season of Advent and Christmas, provides an opportunity to celebrate those things that we hold in common. It is my hope that Christians and Hindus should renew and further develop the local and national frameworks within which we can explore and appreciate both our common and our distinctive characteristics...

The five day Hindu festival of Diwali, also known as "The Festival of Lights" includes some customs that are quite similar to our Christmas traditions, such as the exchange of gifts and festive meals. You can learn more about Diwali here.