The Gong An (Koan) and Hua Tou 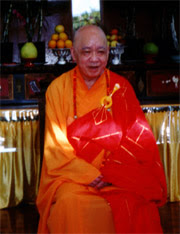 Many people equate Zen training with gong-an (koan) study due to the fairly frequent use of this teaching technique in Zen monasteries. Koans are one of many different techniques that teachers have used over the centuries to help students break through the rigid mental framework that obscures the higher domain of Self. In China, the use of the gong-an dropped as teachers began to recognize that students were more prone to intellectualizing them than to using them as vehicles to penetrate their own mind. They were backfiring -- raising

the barriers rather than lowering them. The hua-tou was the next step in the evolution of this practice and, because of its great simplicity and pointed directedness, it's still often used in China today. Both hua-tou and gong-an studies are excellent methods, but they are not relevant for all people.

The gung-an
Today the gung-an is predominantly used in Japanese Soto and Rinzai sects - though not all of them - as a means of starting students with a Zen practice. They are also used conveniently as seeds for sermons. Translated, gung-an means "public case." An example from the "Book of Serenity, One Hundred Years of Zen Dialogues" is titled "The World Honored One Ascends The Seat". The Dialogue contains an Introduction, a Case (the heart of the gung-an), a Commentary, a Verse, another Commentary and some Added Sayings. In this example, the Case is:

The World Honored One then got down from the seat.

With some consideration and a little historical background, this short dialogue elicits numerous questions, ideas, and meanings that go far deeper than may be initially obvious. The beauty of these literary devices leaves little wonder about why collections of them have been so well preserved over the centuries or why they are still being studied today. Yet, due to the relentless unfolding of time, the context of the vast majority of ancient gong-an's requires a great deal of explanation, explanation that would not have been necessary in the era in which they were written. There are a great many theological concepts that were common knowledge to students a thousand years ago that have now nearly vanished; consequently, the study of ancient koans can require so much background knowledge that the purpose gets lost in the study - they become of more academic interest than religious use. There are, fortunately, a few Zen teachers who have recognized this and are creating contemporary koan collections that are more helpful for students of modern western cultures.

The hua-tou
The hua-tou is a much simpler approach with the same intent as the gong-an: to pierce the veil of ego through pointed concentration to reveal the essence of Self. Instead of dialogues and commentaries and verses, and more commentaries, and more verses, we have a simple idea to ponder: "Before you were born, what was your original face?" or "Who is reciting the mantras?" or "Who is dragging this corpse around?" or even simply "Who is eating?" In the hua-tou, there is no place for dialogue, for discussion, for commentary, for verses: there is just the unanswered question to contemplate. All hua-tou's are essentially the same; they all have the same answer, an answer that cannot be verbalized - only realized. Hsu Yun told his students: "When you begin looking into a hua-tou, grasp it tightly, never letting go. It's like a mouse trying to chew its way out of a coffin. It concentrates you on one point. It doesn't try different places and it doesn't stop until it gets through. The objective is to use one thought to eradicate innumerable other thoughts." But he cautions us that this is not a method to be used lightly or indiscriminately: "This method is a last resort, just as when a poison arrow has pierced someone -- drastic measures must be taken to cure the patient."

Some people have asked me if it's necessary to have a teacher when working with a gung-an or hua-tou. The answer is yes and no. Some ancient koans are so deeply laced with cultural accents that a student studying them needs enough background information just to get started. In such cases a teacher can be extremely helpful. But since the fundamental intent of both the gung-an and hua-tou is to develop one-pointedness of mind through contemplation, independent work with them is essential for them to serve their purpose. I have also been asked, how does one know if one has succeeded in penetrating a hua-tou or gung-an? When we approach them with integrity, devotion, and intensity, we'll know when they have rung a bell for us. It will always be apparent if they are still opaque or if they have opened themselves up to illuminate us. Once we "get it," the need for verification will seem as silly as an Olympic gold-medalist in the 100-meter freestyle event asking one of her competitors if her stroke was any good!