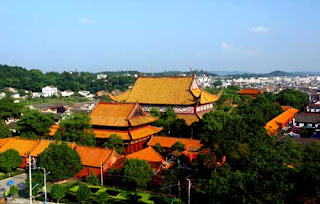 Nanyue Temple is situated on the northern tip of Nanyue Township and at the southern foot of Chidi Peak. In a layout of nine rows, It is the largest and best-preserved ancient palatial architectural complex of south China. Magnificent and splendid with resplendent upturned eaves. Inside the east in parallel to eight Buddhist palaces on the west, It is indeed a wonder in the history of religion that Taoism, Buddhism and Confucian culture can co-exist within a single temple.

The exact time of the construction of Nanyue Temple is unknown. It existed as early as in the Qin and Han Dynasties. Originally Located on the summit of Zhurong Peak, The temple was later moved to the mountain foot to facilitate the religious activities. The beginning of the Tang Dynasty witnessed the formal construction of the Heavenly Lord Huo's Temple the "Heavenly Master Temple". So as to enshrine and worship the Gods of the five sacred mountains, During the Song Dynasty the immortal of the Hengshan Mountain was revered as the "Heavenly Master Zhaosheng",as a result the temple was gradually expanded and enlarged. Since the Tang Dynasty Nanyue Temple had beed subject to six fires and 16 reconstructions all through the Song. Yuan, Ming and Qing Dynasties. In the 8th year of Emperor Guangxu"s reign in the Qing Dynasty (1882 A.D), the Imperial Court ordered the rebuilding of Nanyue Temple. Which had been ruined by lightning, The project was imitative. Copying the styles of the Imperial Palace. And even to the present day it is still well preserved.

Fenced with red-brick walls. Nanyue Temple occupies an area of some 70.000 square metres. From north to south lies in sequence nine rows and four courtyards-Lingxing Gate. Kuixing Tower. Chuan Gate. Pavilion of Imperial Study, Main Hall, Dwelling Palace and the Northern Rear Exit. The whole architecture complex stretches across on axis extending from south to north with its halls linked up together. The winding corridors and wing-rooms on both sides merge with each other. Accentuating the magnificence of the stature of the principal part. On the east side of the main temple there are eight Taoist palaces. Coordinating with eight Buddhist palaces on the west side.

The first row is Lingxing Gate. Two gilded Chinese characters "Mountain Temple" are shining on the white marble at the top of the gate. The marble gate stands as high as 20 metres with a width of 1.1 metres and is meant to imply that during the past dynasties all the religious activities were officiated by real knowledgeable people. The second row is Kuixing Tower. The most perfectly preserved ancient stage in Human Province.with a breadth of 35metres and a length of 12. Its façade facing the main palace, the stage is the place where people hold religious activities and perform local operas during pilgrimage. Before the tower stands a pair of 2-metre tall stone Kylin (Chinese unicorn). With their furious eyes widely open. They are like two solemn looking sentinels guarding the tower. The pebble path under the Kuixing Tower leads to the third row-Main Chuan Gate. East and West Gates. The gateway is made of gray bricks with an awesome depth and height of 15 metres. The courtyard within is filled with dense cypress trees and carpeted with green grass. The fourth row is the Pavilion of Imperial Study. Distinguished by its gilded tiles. Octagonal double-eaved roofs and exquisitely-crafted arches. Inside the pavilion there is a Bixi in the shape of a legendary animal like tortoise. Legend has it that Bixi is the ninth son of the dragon. The Bixi carries an imperial stele on which the full text of On Rebuilding Nanyue Temple was carved in the 47th year of Kangxi's reignm(1780 A.D.) in the Qing dynasty.

The fifth row is Jiaying Gate. Named after the line from The Annals of Han-Books of Rites and Joys: "This row is the place where local magistrates and monks welcomed ritual officials dispatched from the capital. After the Jiaying Gate the sixth row comes into view-Tower of Imperial Study. Which is the storehouse of the collection of imperial calligraphies .messages and inscribed boards concerning the past emperors" ritual presentations to the mountain. Sweeet osmanthus ahead of the tower submerges the building with its refreshing scent when it blossoms every autumn.

The seventh row is the Main Palace. Surrounded by towering old trees. Camphor trees planted in the Song Dynasty and cypress in the Ming Dynasty compete with each other in setting off the beauty of the upturned double-roofs and the splendour of the palace. Adding tremendous awe to the Main Palac. As it stands 29.11 metres, its grandeur rivals that of the Palace of supreme Harmony in the Forbidden City in Beijing. Inside the palace there are 72 stone pillars, standing for the 72 peaks on the Hengshan Mountain. The two huge pillars upholding the main roofs were cut out of a whole granite. Each weighing 14 tons.

Encircled by the balustrades are 144 relief sculptures carved out of white marbles. Based on Shanhai Jing . Pillars on the forefront overlap. Carved on them are 56 historical and legendary tiles . On the square door were carved the Images. On the square door were carved the Images of the 24 filial Sons and the Images of the 18 Scholars. Here tourists can get a rough idea of the age-old Chinese Confucian and Taoist cultures. Clay statues-Heavenly King Zhaosheng and General Jin and Wu line up in the palace with their impressively dignified look, calling forth in tourists a feeling of profound respect.

The eighth row is the dwelling Palacewith double roofs and in perfect harmony with the whole mountain. This structure keeps up the architectural style of the Song Dynasty and is decorated with coloured drawings and patterns which are popular among palaces in the North. giving a sense of gorgeousness to this palace. The ninth row is the Northern Rear Exit. The end of the axial architecture, with Zhusheng Palace to the right and Chief God Palace to the left, At the back of the exit. A path leads farther into the mountain.

Nanyue Temple occupies a prominent position in the history of ancient Chinese architecture. It carries the grandeur characterized by palaces in the North. And at the same time it smacks of the loveliness featured by gardens in the South. The architectural arrangement of the temple is clearly demarcated and gently modulated. Strongly indicating the ingenuity and originality of the craftsmen. Its ground and upper layouts are like an eternal musical movement with its own overture, main body and coda. Demonstrating the excellence of ancient Chinese architecture.

Nanyue Temple carries a profound cultural connotation. It boasts a large number of clay statues. Wood engravings and stone carvings, which are all closely linked up with Chinese tradition and culture. Over 800 dragons of various sizes, which are the symbol of the Chinese nation, can be found everywhere in the temple. The carvings on the roof wood and white marble balustrades are an encyclopedia of ancient history and mythology. There are fairy tales- "Pan Gu Creating the Universe." "Hou Yi Shooting the Suns", "Jing Wei Filling up the Ocean"?-; real stories about some historical figures- "Su Wu Shepherding Sheep." "sleeping on sticks and Tasting the Gallbladder." "Da Mo Crossing the Sea"?- ; legends extolling filial piety- "Melting the Ice with Body Warmth to Catch Carps." "Weeping on the Bamboo until it Turns into shoots"?- Most of the carvings are the legends about the earliest ancestors of Taoist immortals. As early as in the Qing and Ming Dynasties, clay status, wood engraving and stone carving were reputed as "the Three Wonders to the South of the Yangtze River."