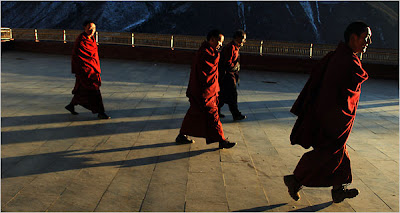 The recent crisis in Tibet focused attention on whether there would be yet another ‘colour revolution’ - this time on the roof of the world, leading to a substantial portion of China breaking away.

China has reasons to be concerned. The actors involved in Tibet are essentially the same as those who were involved in toppling legitimate governments elsewhere in the Eurasian heartland.
After doing a comparison, William Engdahl, author of A Century Of War: Anglo-American Oil Politics And The New World Order, has concluded that the Tibetan uprising is but another colour revolution - this time ‘crimson’.

‘As in the other Colour Revolutions, the United States government is fanning the flames of destabilisation against China by funding opposition protest organisations inside and outside Tibet through its arm, the National Endowment for Democracy (NED),’ Engdahl said.
He also cited Freedom House, a non-governmental organisation (NGO), and Trace Foundation, which is funded by financier George Soros through his daughter Andrea Soros Colombel.

The NED was set up by the Reagan administration in the early 1980s on the recommendation of, among others, then-CIA director Bill Casey. It was designed as an independent NGO, one step removed from the US government. Yet its first acting president Allen Weinstein admitted to the Washington Post that ‘a lot of what we do today was done covertly 25 years ago by the CIA’.

The NED has been instrumental in the staging of every ‘colour revolution’ - from Serbia to Georgia, from the Ukraine to Myanmar, says Engdahl.

These groups tried to organise a protest march by Tibetans in India back to their homeland, and had a hand in organising the recent riots in Tibet.

The NED’s funding comes almost entirely from the US government. A 2007 report by the Congressional Research Service says US foreign operations appropriations for the People’s Republic of China grew from US$10 million (S$13.5 million) in 2002 to US$23 million in 2006. Most of this money went to democracy-related programmes and for the support of Tibetan communities.

About 40 per cent of US government funding for human rights and democracy-related programmes in China was allocated through the NED. Funds for Tibetan exiled communities also came from the State Department’s Bureau of Democracy, Human Rights and Labour, the US Agency for International Development and the New York-based Tibet Fund.

Advice and training for the exiled Tibetans were provided, among others, by the Albert Einstein Institution (AEI), which is funded by Soros foundations and the US government.

AEI founder Gene Sharp once said his institute specialised in ‘non-violence as a form of warfare’. AEI’s former president Robert Helvey, a retired US Army colonel and former Defence Intelligence Agency official, is on record as stating that he got involved in ‘strategic non-violence’ after observing the failure of military approaches to toppling dictators. He found this other approach - non-violence - more appealing.

According to a source with access to the Tibetan movement, prior to the March 10 demonstrations in Lhasa, 40 grassroots activists representing 25 Tibetan communities in India were given advanced training on grassroots activism and capacity-building by the five leading Tibetan NGOs, with training manuals provided by the AEI. Held from Feb 15 to 17, the course familiarised participants with the concept of non-violence as warfare.

The AEI has translated its two main ‘colour revolution’ manuals into Tibetan, one with a foreword by the Dalai Lama. Activists from Serbia and Ukraine have said that AEI’s training and manuals were instrumental in the formation of their strategies.

American NGOs were not alone in stoking the fire. German ones, funded by the Berlin government, have played an increasingly significant role recently.

The Friedrich Naumann Foundation (FNF), a think tank linked to the German Free Democratic Party, has been actively involved in the Tibetan independence movement. According to German-Foreign-Policy.com, a website founded by a group of German journalists and social scientists, the FNF ‘gave the impetus to the current anti-Chinese Tibet campaign that violently forced the interruption of the Olympic torch relay in Paris’.

Last May, the FNF helped organise the Fifth International Tibet Support Groups Conference in Brussels. According to a Tibetan Government in Exile statement, the event led to a ‘road map’ for the Tibet movement for the coming years. It was decided then to make the 2008 Olympics the focus of their activities.

The road map called for global protests, a march of exiles from India to Tibet and rallies within Tibet. The Olympics were seen as a chance for Tibetans to come out and protest ‘like one mighty force’ - or else Tibet would ‘slip out of the world map’.

Mr Rolf Berndt, from the FNF’s executive council, has said the Games were ‘an excellent opportunity to publicly promote the cause of the Tibet Movement’.

Early this January, the five exile organisations issued a statement saying ‘the 2008 Olympics will mark the culmination of almost 50 years of Tibetan resistance in exile. We will use this historic moment to reinvigorate the Tibetan freedom movement and bring our exile struggle for freedom back to Tibet. We will bring about another uprising that will shake China’s control in Tibet and mark the beginning of the end of China’s occupation’.

Clearly, the immediate cause of the recent bloodshed in Tibet should be attributed to this road map, not the suppression of peaceful demonstrations by the Chinese government, as claimed by most of the Western media.
at 06:56