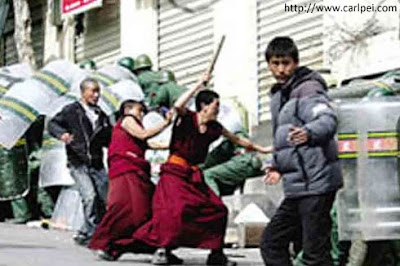 The recent Tibet unrest has been huge in Western media as of late. Western coverage (CNN, Fox, BBC, …) hasn’t merely been biased against China, but downright against China. A lot of lies and misinformation was spread. For instance, the protests were labeled as “peaceful”, when many Tibetans, even monks, were caught on tape with weapons destroying property or beating Police.

When they found this wasn’t working well for them, they then spread the false news that the Chinese Army (PLA) had set the riots up, dressing as monks. A picture was even provided as evidence, but only hours after the report that picture was also found to be fake. The photo was taken during a 1994 movie shooting. Chinese movie companies often use students or the military for low skilled acting as they are much cheaper than professional actors. Also, the PLA uniform was changed long ago, the picture showed them with the old version.

I find it funny that Western media outlets, that often speak poorly of China’s state controlled media are responsible for such a catastrophic level of journalism. Clearly, they are at least as bad as their Chinese “propaganda-spreading” counterparts.

The central government also acted with extreme caution this time, as they knew that separatist camps as well as the Western media was watching closely for any form of aggression. Despite of this, several journalists have stilled called for a 2008 Olympics Boycott, one prominent journalist even compared the 2008 Olympics to the 1936 Nazi Olympics.

On German TV, people saw videos of how Nepalese Police beat monks at the same time as reporting as reporting the Tibet unrest in China. If I was an average German citizen, I sure as hell would hate China after watching the news too. All the false, bad press about China has caused major demonstrations outside the Chinese embassies throughout the entire Western world.

After all this media hype, I decided to do some digging on my own, on the (so-called) root of the problem; the Dälai Läma. He is sponsored by CIA... Information... (including the Dalai Lama and the so-called "Tibet-In-Exile Government" admitting this fact) can even be collected from commercial Western media, such as the New York Times.

Despite all this, China won.

This is the information age, and as Chinese citizens now are better educated and use English more proficiently, they also learn ways to bait the media. First, a Chinese student collected photos of how Western news reports wrongly told this story. Chinese news websites quickly picked the photos up, and not long after, even Chinese old media started reporting on this. When the Chinese mainstream got to know about this, they were furious at all the lies. Even students, who often disagreed with the actions of the central government embracing Western thinking, were now fully supportive of how the government handled the situation.

China unites, and fights back. All over the internet, one could see Chinese citizens posting on English message boards in their best English trying to explain their truth. Not long after, students set up a website, Anti CNN, to show the various “lies” that the Western media used to turn the story against China. If you are interested in learning more about Tibet, or how Chinese people feel about the situation, I strongly urge you to check the website.

Also, it’s funny to note that the Chinese government has noticed that the internet can not only work against them, but in favor of them too. After years of inaccessibility from the Middle Kingdom, the BBC, which was responsible for many of the so called lies, was suddenly unblocked in the midst of chaos so that everyone in China could see how they reported. I was shocked at fist, but now believe it was a very smart move.

Maybe it’s because the Chinese people are starting to tell their versions of what’s happened, that the overall tone online has changed. Ten, or even five years ago, if something like this happened, people all over the world would agree in unison that China was evil. Now, it’s different. More and more Westerners, especially those with higher education, (have woken up and) are not so sure about their position anymore. Some have even started to support China and condemn their own media on this matter.