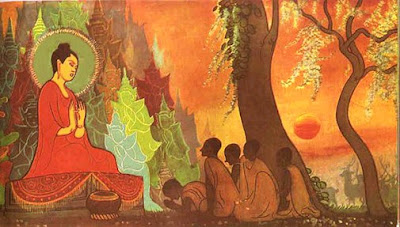 The Ten Commandments may be called the 10 precepts of the Jewish and Christian faiths. However other faiths also have 10 precepts which are not very different from the morality of Judeo-Christian religions either.

The Ten Precepts of Daoism were outlined in a short text that appears in Dunhuang manuscripts. The precepts are the classical rules of medieval Daoism as applied to practitioners attaining the rank of Disciple of Pure Faith. They first appeared in the Scripture on Setting the Will on Wisdom.

1. Do not kill but always be mindful of the host of living beings.
2. Do not be lascivious or think depraved thoughts.
3. Do not steal or receive unrighteous wealth.
4. Do not cheat or misrepresent good and evil.
5. Do not get intoxicated but alwyas think of pure conduct.
6. I will maintain harmony with my ancestors and family and never disregard my kin.
7. When I see someone do a good deed, I will support him with joy and delight.
8. When I see someone unfortunate, I will support him with dignity to recover good fortune.
9. When someone comes to do me harm, I will not harbour thoughts of revenge.
10. As long as all beings have not attained the Dao, I will not expect to do so myself.

The Ten Precepts (Pali: dasasila or samanerasikkha) may refer to the precepts (training rules) for [Buddhist] samaneras (novice monks) and samaneris (novice nuns). They are used in most Buddhist schools. The ten precepts of Buddhism are:

In the 17th chapter, "Al-Israa" ("The Night Journey"), verses [Qur'an 17:22], the Qur'an provides a set of moral stipulations which are "among the (precepts of) wisdom, which thy Lord has revealed to thee" that can be reasonably categorised as ten in number. According to S. A. Nigosian, Professor of religious studies at the University of Toronto, these resemble the Ten Commandments in the Bible and "represents the fullest statement of the code of behavior every Muslim must follow".

1. Worship only God
2. Be kind, honourable and humble to one's parents
3. Be neither miserly nor wasteful in one's expenditure
4. Do not engage in 'mercy killings' for fear of starvation
5. Do not commit adultery
6. Do not kill unjustly
7. Care for orphaned children
8. Keep one's promises
9. Be honest and fair in one's interactions
10. Do not be arrogant in one's claims or beliefs
at 04:10