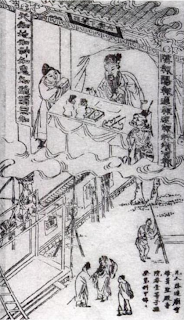 The Jade Record or Yuli is an illustrated religious tract that circulated in various versions and editions in the 19th century in China. It has some folk-Buddhist and Daoist features and describes the horrors of Diyu (hell in Chinese mythology) that await bad people.

The prologue states that the tract was submitted to the Jade Emperor or Highest God by the king of hell Yan Luo and the Bodhisattva of Compassion, then passed down to a Buddhist priest and on to a Taoist, sometime during the Song Dynasty.

The tract describes how the dead pass through the ten courts of hell and are punished with terrible torture according to their misdeeds during life. In the first hall, the "Mirror of Reflection" lets the dead see their own sins. Sins specifically mentioned include: mocking or disbelieving the tract itself, taking one's life without good reason, having weak faith in the Buddha, being careless as Buddhist or Taoist priest, killing live creatures, stealing, cheating, gambling, drinking, drowning baby girls, killing slaves etc. Yan Luo himself rules over the fifth court of hell; the Highest God demoted him from the first court because he proved too compassionate towards murder victims, allowing them to return to the world for another life. Yan Luo also built a "Tower to View the World", from which the dead can observe how their relatives curse their memory and fight over their possessions. At the end of their passage through hell, the souls are made to forget their previous lives in the goddess Meng's "Tower of Forgetting" and are sent back to the world, reincarnated as animals, poor, ill or ugly humans, or as rich men, depending on their prior behavior.

The Jade Record also contains a calendar, devoting the first day of the first lunar month to Maitreya Buddha, the eighth day to Yan Luo, the ninth to the Jade Emperor. The Sakyamuni Buddha, the Boddhisattva of Compassion, and the Kitchen God receive two days each.
Numerous other gods also receive their special day.

The Qing emperors tried to suppress the tracts, as the state religion Confucianism discouraged any speculation about the afterlife. Hong Xiuquan, the quasi-Christian leader of the Taiping Rebellion, forbade the tracts once he had risen to power.
at 08:16