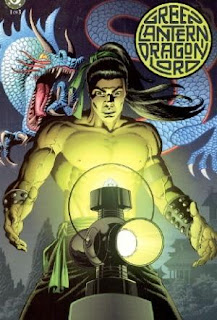 Jong Li was actually Earth's first Human "Green Lantern", and was a monk raised in the Temple of the Dragon Lords in Feudal China.

When Jong Li was growing up, he was taught of the Dragon Lords, beings who ruled in the "Golden Age" of man, and that under these lords, man prospered. He was taught to renounce all earthly possessions and to live a life of peace and discipline, but then one day an Imperial concubine, Jade Moon, and her infant son came to him in his temple, begging for help in trying to escape her bonds. Jong Li tried to help her but failed, and his temple and fellow monks were ravaged by the emperor's troops and their commander.

Jong Li later encountered one of the Guardians of the Universe who gave him a power ring and a lantern battery to "Oppose Evil, Ease Suffering and Protect the Innocent." Jong Li later rescued Jade Moon and learned of Lung Mountain, where the last Dragon Lords supposedly lived. He set out to seek their higher authority and with their Blessing of Fire became the last Dragon Lord of the Earth, finally defeating the evil emperor's forces and saving his people.

Two thousand years ago, one of the greatest of the so-called "Green Lanterns", a red dragon named Yalan Gur, was nearly killed by a yellow beast. The Guardians of the Universe were led to question whether they should risk their best Green Lantern with such an arbitrary weakness. The Guardians somehow removed the yellow impurity from Yalan Gur's power ring alone. Unfortunately, without any weaknesses, he was soon corrupted by his power.

In becoming invincible, Yalan came to see himself as infallible. He felt he should shape his sector as he saw fit. Yalan Gur feared the Earth's rise of mankind in the universe. To halt human development, he terrorized ancient China, at that time the highest level of civilization. Yalan felt the best way to control humanity was to keep it in disarray.

The trading city of Chao-Tzu, one of the deepest inland outposts of the Chinese Empire, was to be attacked by a bandit tribe from the Sinkiang Hills. The only thing that could have stopped them was the mounted detachment of Minister Xiang-Fa's Yellow Warriors. Only they could sustain China's Westward expansion.

Not trusting his warriors alone to defend him, Minister Xiang-Fa had a fortress wall built. Yalan attacked the wall, enraging the peasants who then attacked him with wooden sticks. Yalan laughed off their attempt. The Guardians, who had waited for their opportunity to humble Yalan, changed the composition of his power ring and power battery. The ring was now vulnerable to wood, the humblest of the peasants' weapons.

So enraged by the humans' attack and by the Guardians' apparent betrayal, Yalan did not order his ring to repair his wounds. Mortally injured, he plummeted to Earth, the air friction setting him on fire. Yalan Gur died during reentry to Earth’s atmosphere, burning up, his life absorbed by the battery. Its casing melted and crashed as a green meteor, fusing with the mystical "Starheart". 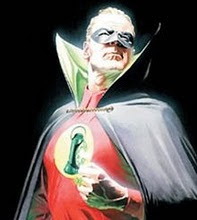 The Starheart itself was created long ago by the Guardians of the Universe. The Guardians had sought to remove magic from the universe. To this end, all energies mystical or magical, both good and evil, were gathered and bound, and compressed within the pith of a star. The Guardians left it there as a monument and prison to a fallen Green Lantern.

Chang took part of the meteor, which angered the people of the village who now believed Chang and the fallen star were evil. The sorcerer made a lamp of the molten metal, and was killed by his frightened neighbors. They in turn were killed by the lamp. First - to bring death.

In the twentieth century, the lamp was brought to America by a trio of adventurers who had tracked the pirates of the China seas. Eventually, it was left just north of Gotham, outside an Asylum for the Criminally Insane. The lamp was given to one of the patients, who was fond of working with metals. He transformed the Chinese lamp into a train lantern. As the lantern flamed with light, the man was cured. Soon, he walked out of the Asylum a sane man. Second - to bring life.

A few years later, the lantern was in a train, which was on a test run over the newly constructed Trestle Bridge in the American West. The passengers had no idea it would be sabotaged. Crossing the bridge, there was an explosion which hurled the train to the ground below. All on the train were killed, except for Alan Scott, an engineer in charge of the bridge's construction. The green lantern's flame illuminated the wreckage. It spoke to Scott, telling him much of it's story. It promised Scott that power over the dark evil things would be his if he had faith in himself. If he lost his faith, he would lose his power, because willpower is the flame of the green lantern. Scott was then told to carve a part of the lantern to make a ring of power which must be touched to the green lantern once every twenty four hours.

Returning to his office, Scott found the metal formed easily, almost as if the ring were willing itself to be shaped. The lantern was his power source. Scott used the ring to bring the saboteurs to justice. He learned the might and the limitations of the power ring. Though it had miraculous abilities, it was still ineffectual against wood. Still, Alan Scott felt the call of destiny. He dressed in a costume of red and green, creating an oath, based on the words of the green flame. Third - to bring power! The ring was destroyed roughly fifty years later, and Alan Scott has since internalized the power and named himself Sentinel. 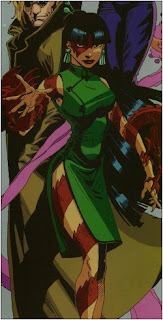 He married an Asian woman named Rose Canton from Tashmi Island in the Pacific, who had twins named Jade and Obsidian who appear to have each internalized a portion of the power of the Starheart.

There is also another woman with a "green lantern". This "Keeper of the Flame" uses an old-fashioned Chinese Lantern suspended from a hook. A corona of green mist surrounds the lantern offset by the glowing, green light of the lantern itself. By placing the lantern atop the grave of the recently deceased, she can temporarily resurrect the dead, so that they may carry out any unfinished business before returning to the afterlife. The true origin of this Asian woman is steeped in mystery.

She has also been associated with a mysterious figure,known only as Jade. A native of communist China, Jade wields magic powers which are demonstrated in the form of two crimson dragon tattoos on her arms which, at her command, spring to life to do her bidding. While the Chinese government did not approve of magic powers, the anti-Communist resistance in China found her abilities very useful.
at 04:01