The All-Virtuous Wisdom of Jesus ben Sirach of Jerusalem 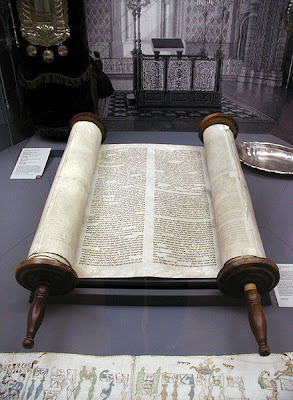 The Book of the All-Virtuous Wisdom of Jesus ben Sira, commonly referred to as the Wisdom of Sirach or simply Sirach, and also known as Ecclesiasticus or Siracides, is a work from the early 2nd century B.C.(approximately 200-175 B.C.) written by the Jewish scribe Jesus ben Sirach of Jerusalem. The book was not accepted into the later post-Christian canon Hebrew Bible and as a result the original Hebrew text was not preserved in the Jewish canon, however various original Hebrew versions have since been recovered.

There are numerous citations of Sirach in the Talmud and works of rabbinic literature (as "ספר בן סירא", e.g., Hagigah 13a). Despite not finding ultimate acceptance into the later scriptural canon of Judaism, it was read as scripture by most Jews. For instance, it was included in the canon of the Jewish Septuagint, a 2nd century BC Greek version of the Jewish scriptures used by Diaspora Jews. Sirach is accepted as part of the Christian biblical canon by all Catholics, Eastern Orthodox, and Oriental Orthodox but not by most Judaizing Protestants. The Greek Church Fathers also called it the "All-Virtuous Wisdom", while the Latin Church Fathers, beginning with Cyprian, termed it Ecclesiasticus because it was frequently read in churches, leading to the title liber ecclesiasticus (Latin and Latinised Greek for "church book").

In Egypt, it was translated into Greek by the author's grandson, who added a prologue. The Prologue to the Book of the All-Virtuous Wisdom of Jesus ben Sirach is generally considered the earliest witness to a canon of the books of the prophets.

The "Book of ben Sirach" (ספר בן סירא, Sefer ben Siraʼ) was originally written in Hebrew, and is also known as the "Proverbs of ben Sirach" (משלי בן סירא, Mišley ven Siraʼ) or the "Wisdom of ben Sirach" (חכמת בן סירא, Ḥokhmat ben Siraʼ). The Greek translation was accepted in the Septuagint under the (abbreviated) name of the author: Sirakh (Σιραχ). Some Greek manuscripts give as the title the "Wisdom of Iēsous Son of Sirakh" or in short the "Wisdom of Sirakh". The older Latin versions were based on the Septuagint, and simply transliterated the Greek title in Latin letters: Sirach. In the Vulgate the book is called Liber Iēsū fīliī Sirach ("Book of Jesus Son of Sirach"). The Neo-Vulgate uses the title given by the early Latin Fathers: Ecclesiasticus, literally "of the Church" because of its frequent use in Christian teaching and worship. Today it is more frequently known as Sirach. The name Siracides, of more recent coinage, is also encountered, especially in scholarly works.

Ben Sirach, a Jewish scribe who had been living in Jerusalem, may have authored the work in Alexandria, Egypt circa 180–175 BC, where he is thought to have established a school.

The Greek translator states in his preface that he was the grandson of the author, and that he came to Egypt in the thirty-eighth year of the reign of "Euergetes". This epithet was borne by only two of the Ptolemies. Of these, Ptolemy III Euergetes reigned only twenty-five years (247-222 BC.) and thus Ptolemy VIII Euergetes must be intended; he ascended the throne in the year 170 BC, together with his brother Philometor, but he soon became sole ruler of Cyrene, and from 146 to 117 held sway over all Egypt. He dated his reign from the year in which he received the crown (i.e., from 170). The translator must therefore have gone to Egypt in 132 BC.

Ben Sirach's grandson was in Egypt, translating and editing after the usurping Hasmonean line had definitively ousted Simon's heirs in long struggles and was finally in control of the High Priesthood in Jerusalem.
The Greek version of Sirach is found in many codices of the Septuagint.

As early as 1896, several substantial Hebrew texts of Sirach, copied in the 11th and 12th centuries AD, were found in the Cairo geniza (a synagogue storage room for damaged manuscripts). Although none of these manuscripts is complete, together they provide the text for about two-thirds of the Wisdom of Sirach. According to scholars including Solomon Schechter and Frederic Kenyon, this shows that the book was originally written in Hebrew. That Sirach was originally written in Hebrew may be of some significance for the biblical canon. The book was accepted into the canon of the Old Testament/Hebrew Bible by Catholicism and Eastern Orthdoxy but not by Post-Christian Judaism or Judaizing Protestantism, apparently on the basis that no Hebrew original was thought to exist at the time the Post-Christian Jewish Canon was closed.

In the 1950s and 1960s three copies of portions of Sirach were found among the Dead Sea Scrolls. The largest scroll was discovered at Masada, the famous Jewish fortress destroyed in 73 AD. The earliest of these scrolls (2Q18) has been dated to the second part of the 1st century BC, approximately 150 years after Sirach was first composed. These early Hebrew texts are in substantial agreement with the Hebrew texts discovered in Cairo, although there are some minor textual variants. With these findings, scholars are now more confident that the Cairo texts are reliable witnesses to the Hebrew original.

The Wisdom of Sirach is a collection of ethical teachings. Thus Ecclesiasticus closely resembles Proverbs, except that, unlike the latter, it is the work of a single author, not an anthology of maxims drawn from various sources.

The teachings are applicable to all conditions of life: to parents and children, to husbands and wives, to the young, to masters, to friends, to the rich, and to the poor. Many of them are rules of courtesy and politeness; and a still greater number contain advice and instruction as to the duties of man toward himself and others, especially the poor, as well as toward society and the state, and most of all toward God. These precepts are arranged in verses, which are grouped according to their outward form. The sections are preceded by eulogies of wisdom which serve as introductions and mark the divisions into which the collection falls.

Wisdom, in ben Sirach's view, is synonymous with the fear of God, and sometimes is identified in his mind with adherence to the Mosaic law. The maxims are expressed in exact formulas, and are illustrated by striking images. They show a profound knowledge of the human heart, the disillusionment of experience, a fraternal sympathy with the poor and the oppressed, and an unconquerable distrust of loose women.

As in Ecclesiastes, two opposing tendencies war in the author: the faith and the morality of olden times, which are stronger than all argument, and an Epicureanism of modern date. Occasionally Sirach digresses to attack theories which he considers dangerous; for example, that man has no freedom of will, and that God is indifferent to the actions of mankind and does not reward virtue. Some of the refutations of these views are developed at considerable length.

Through these moralistic chapters runs the prayer of Israel imploring God to gather together his scattered children, to bring to fulfilment the predictions of the Prophets, and to have mercy upon his Temple and his people. The book concludes with a justification of God, whose wisdom and greatness are said to be revealed in all God's works as well as in the history of Israel. These chapters are completed by the author's signature, and are followed by two hymns, the latter apparently a sort of alphabetical acrostic.

Sirach was used as the basis for two important parts of the Jewish liturgy. In the Mahzor (High Holy day prayer book), a medieval Jewish poet used Sirach as the basis for a poem, KeOhel HaNimtah, in the Yom Kippur musaf ("additional") service for the High Holidays. Recent scholarship indicates that it formed the basis of the most important of all Jewish prayers, the Amidah. Sirach apparently provides the vocabulary and framework for many of the Amidah's blessings. Many rabbis quoted Sirach as an authoritative work during the three centuries before the advent of Yavneh.

The distinguished patristic scholar Henry Chadwick has claimed that in Matthew 11:28 Jesus was directly quoting Sirach 51:27, as well as comparing Matthew 6:12 "And forgive us our debts, as we forgive our debtors." (KJV) with Sirach 28:2 "Forgive your neighbor a wrong, and then, when you petition, your sins will be pardoned." (Some other translations, such as the Revised Standard Version, read, for Matthew 6:12, "And forgive us our trespasses, as we forgive those who trespass against us.")

The catalogue of famous men in Sirach contain several messianic references. The first occurs during the verses on David. Sir 47:11 reads “The Lord took away his sins, and exalted his power for ever; he gave him the covenant of kings and a throne of glory in Israel.” This references the covenant of 2 Sam 7, which pointed toward the Messiah. “Power” (Heb. qeren) is literally translated as horn. This word is often used in a messianic and Davidic sense (e.g. Ezek 29:21, Ps 132:17, Zech 6:12, Jer 33:15). It is also used in the Benedictus to refer to Jesus (“and has raised up a horn of salvation for us in the house of his servant David”).

Another messianic verse (47:22) begins by again referencing 2 Sam 7. This verse speaks of Solomon and goes on to say that David’s line will continue forever. The verse ends telling us that “he gave a remnant to Jacob, and to David a root of his stock.” This references Isaiah’s prophecy of the Messiah: “There shall come forth a shoot from the stump of Jesse, and a branch shall grow out of his roots”; and “In that day the root of Jesse shall stand as an ensign to the peoples; him shall the nations seek…” (Is 11:1, 10).

Another way Sirach is interpreted messianically is its use of personified Wisdom. In Sirach Wisdom is personified twice, in chapters one and 24. Wisdom is explicitly said to be eternal: “From eternity, in the beginning, he created me, and for eternity I shall not cease to exist.” (24:9) At Sir 1:4 the genesis of Wisdom is described much as it is at Prov 8:22. Like Prov 8, Sir 24 has many parallels to Col 1:15. Wisdom tells us that she “came forth from the mouth of the Most High, the first-born before all creatures.” (Sir 24:3a) This statement is similar to Christ’s being the Word, and the “first-born of all creation”. (Col 1:15b) At Sir 24:19 Wisdom tells her listeners to “Come to me”, which, it has been noted, is similar to Christ’s saying “Come to me” at Mt 11:28. Like Jesus the Messiah, Wisdom also keeps souls from sin (Sir 24:22).