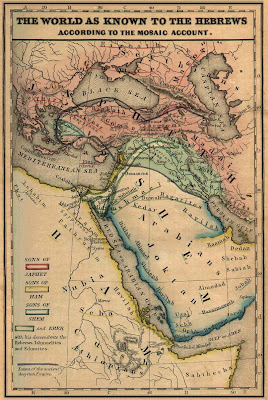 The Seventy Nations or Sons of Noah is an extensive list of descendants of Noah appearing in Genesis 10 of the Hebrew Bible, representing an ethnology from an Iron Age Levantine perspective. The significance of Noah in this context is that, according to Genesis, the population of the Earth was completely destroyed during the Flood because of the wickedness of the inhabitants, and Noah and his family were the sole eight survivors to continue the human race. The view of history presented by the Bible is thus that all humans on Earth are descended from Noah's family, and thereby related.
Genesis 10 suggests that the present population of the world was descended from Noah's three sons: Shem, Ham, and Japheth, and their wives. This is taken by many as historical fact by many Orthodox Jews, Orthodox Christians, and Orthodox Muslims.
There are disputes about how many of the peoples of the Earth this story was intended to cover, and as to its accuracy. Jews, Christians, and Muslims retain the belief that the table applies to the entire population of the earth.

In the Biblical view, the listed children of Japheth, Shem and Ham correspond to various historic nations and peoples. In the typical interpretation, these sons of Noah correspond to three races: European, Semitic, and African. Alternate divisions claim Euro-Asian Japhet, Semitic Shem, and Afro-Asian Ham.
According to Genesis 10, Noah had three sons:
The names of these sons are thought to have significance related to Semitic roots. Ham means "warm". Shem merely means "name" or "renown", "prosperity". Japheth means "open".

In the view of some 17th century European scholars (e.g., John Webb), the people of China and India descended from Shem. Both Webb and the French Jesuits belonging to the Figurist school (late 17th-early 18th century) went even further, identifying the legendary Emperor Yao of Chinese history with Noah himself.
There exist various traditions in post-biblical sources claiming that Noah had children other than Shem, Ham, and Japheth — born variously before, during, or after the Deluge.
According to the Quran (Hud v. 42–43), Noah had another unnamed son who refused to come aboard the Ark, instead preferring to climb a mountain, where he drowned. Some later Islamic commentators give his name as either Yam or Kan'an.

According to Irish mythology, as found in the Annals of the Four Masters and elsewhere, Noah had another son named Bith, who was not allowed aboard the Ark, and who attempted to colonise Ireland with 54 persons, only to be wiped out in the Deluge.
Some 9th century manuscripts of the Anglo-Saxon Chronicles assert that Sceafa was the fourth son of Noah, born aboard the Ark, from whom the House of Wessex traced their ancestry; in William of Malmesbury's version of this genealogy (c. 1120), Sceaf is instead made a descendant of Strephius, the fourth son born aboard the Ark (Gesta Regnum Anglorum).

An early Arabic work known as Kitab al-Magall or the Book of Rolls (part of Clementine literature) mentions Bouniter, the fourth son of Noah, born after the flood, who allegedly invented astronomy and instructed Nimrod. Variants of this story with often similar names for Noah's fourth son are also found in the ca. 5th century Ge'ez work Conflict of Adam and Eve with Satan (Barvin), the ca. 6th century Syriac book Cave of Treasures (Yonton), the 7th century Apocalypse of Pseudo-Methodius (Ionitus), the Syriac Book of the Bee 1221 (Yônatôn), the Hebrew Chronicles of Jerahmeel, ca. 12th–14th cent. (Jonithes), and throughout Armenian apocryphal literature, where he is usually referred to as Maniton; as well as in works by Petrus Comestor c. 1160 (Jonithus), Godfrey of Viterbo 1185 (Ihonitus), Michael the Syrian 1196 (Maniton), Abu Salih the Armenian c. 1208 (Abu Naiţur); Jacob van Maerlant c. 1270 (Jonitus), and Abraham Zacuto 1504 (Yoniko).

Martin of Opava (c. 1250), later versions of the Mirabilia Urbis Romae, and the Chronicon Bohemorum of Giovanni di Marignola (1355) make Janus (i.e., the Roman deity) the fourth son of Noah, who moved to Italy, invented astrology, and instructed Nimrod.

According to the monk Annio da Viterbo (1498), the Hellenistic Babylonian writer Berossus had mentioned 30 children born to Noah after the Deluge, including sons named Tuiscon, Prometheus, Iapetus, Macrus, "16 titans", Cranus, Granaus, Oceanus, and Tipheus. Also mentioned are daughters of Noah named Araxa "the Great", Regina, Pandora, Crana, and Thetis. However, Annio's manuscript is widely regarded today as having been a forgery.