The Book of Enoch, Great-Grandfather of Noah 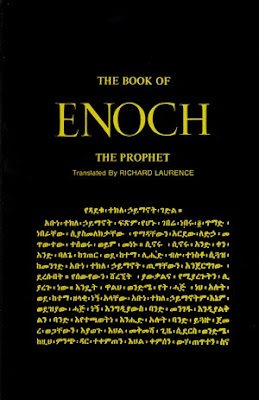 The Book of Enoch (also 1 Enoch) is an ancient Jewish religious work, traditionally ascribed to Enoch, the great-grandfather of Noah. It is not part of the biblical canon as used by Jews, apart from Beta Israel. It is regarded as canonical by the Ethiopian Orthodox Tewahedon Church and Eritrean Orthodox Church, but no other Christian group.

Western scholars believe that its older sections (mainly in the Book of the Watchers) date from about 300 BC, and the latest part (Book of Parables) probably was composed at the end of the 1st century BC.

It is wholly extant only in the Ge'ez language, with Aramaic fragments from the Dead Sea Scrolls and a few Greek and Latin fragments. There is no consensus among scholars about the original language: some propose Aramaic, others Hebrew, while the probable thesis, according to E. Isaac, is that 1 Enoch, like Daniel, was composed partially in Aramaic and partially in Hebrew. Ethiopian scholars generally hold that Ge'ez is the language of the original from which the Greek and Aramaic copies were made, pointing out that it is the only language in which the complete text has yet been found.

A short section of 1 Enoch (1 En 1:9) is quoted in the New Testament (Letter of Jude 1:14-15), and is there attributed to "Enoch the Seventh from Adam" (1 En 60:8). It is argued that all the writers of the New Testament were familiar with it and were influenced by it in thought and diction.

The book consists of five quite distinct major sections):
Among most scholars is the shared view that these five sections were originally independent works (with different dates of composition), themselves a product of much editorial arrangement, and were only later redacted into what we now call 1 Enoch. This view is now opposed only by a few authors who maintain the literary integrity of the Book of Enoch, one of the most recent (1990) being the Ethiopian Wossenie Yifru.

Józef Milik has suggested that the Book of Giants found among the Dead Sea Scrolls should be part of the collection, appearing after the Book of Watchers in place of the Book of Parables, but for various reasons, Milik's theory has not been widely accepted.

Although evidently widely known at the time of the development of the Jewish Bible canon, 1 Enoch was excluded from both the formal canon of the Tanakh and the typical canon of the Septuagint and therefore, also the writings often known today as the Apocrypha. One possible reason for Jewish rejection of the book might be the textual nature of several early sections of the book that make use of material from the Torah; for example, 1 En 1 is a midrash of Deuteronomy 33. The content, particularly detailed descriptions of fallen angels, would also be a reason for rejection from the Hebrew canon at this period - as illustrated by the comments of Trypho the Jew when debating with Justin Martyr on this subject. Trypho: "The utterances of God are holy, but your expositions are mere contrivances, as is plain from what has been explained by you; nay, even blasphemies, for you assert that angels sinned and revolted from God." (Dialogue 79)


"And Enoch also, the seventh from Adam, prophesied of these [men], saying, Behold, the Lord cometh with ten thousands of his saints, To execute judgment upon all, and to convince all that are ungodly among them of all their ungodly deeds which they have ungodly committed, and of all their hard speeches which ungodly sinners have spoken against him."


"And behold! He cometh with ten thousands of His holy ones To execute judgement upon all, And to destroy all the ungodly: And to convict all flesh Of all the works of their ungodliness which they have ungodly committed, And of all the hard things which ungodly sinners have spoken against Him."

Compare this also with what may be the original source of 1 En 1:9 in Deuteronomy 33:2:


"The Lord came from Sinai and dawned from Seir upon us; he shone forth from Mount Paran; he came from the ten thousands of holy ones, with flaming fire at his right hand."

In the case of the Jude 14 quotation of 1 Enoch 1:9, it would be difficult to argue that Jude does not quote Enoch as he cites Enoch by name (verse 14). However, there remains a question as to whether the author of Jude attributed the quotation believing the source to be the historical Enoch before the flood or a midrash of Deut 33:2-3. The Greek text is also unusual in stating that "Enoch the Seventh from Adam" prophesied "to" (dative) not "of" (genitive) the men.

Peter H. Davids points to Dead Sea Scrolls evidence but leaves it open as to whether Jude viewed 1 Enoch as canon, deuterocanon, or otherwise: "Did Jude, then, consider this scripture to be like Genesis or Isaiah? Certainly he did consider it authoritative, a true word from God. We cannot tell whether he ranked it alongside other prophetic books such as Isaiah and Jeremiah. What we do know is, first, that other Jewish groups, most notably those living in Qumran near the Dead Sea, also used and valued 1 Enoch, but we do not find it grouped with the scriptural scrolls."

It may be significant that the attribution "Enoch the Seventh from Adam" is apparently itself a section heading taken from 1 Enoch (1 En 60:8, Jude 1:14a) and not from Genesis.

The Book of Enoch is considered as Scripture in the Epistle of Barnabas (16:4) and by many of the early Church Fathers, such as Athenagoras, Clement of Alexandria, Irenaeus and Tertullian, who wrote c. 200 that the Book of Enoch had been rejected by the Jews because it contained prophecies pertaining to Christ, like the Masoretic canon of the Jews undoubtedly did.

However, later Fathers denied the canonicity of the book, and some even considered the letter of Jude uncanonical because it refers to an "apocryphal" work. By the 4th century, it was mostly excluded from Christian lists of the Biblical canon, and it was omitted from the canon by most of the Christian church (the Ethiopian Orthodox Church being an exception).

The traditional view of the Ethiopic Orthodox Church, which reckons 1 Enoch as an inspired document, is that the Ethiopic text is the original one, written by Enoch himself. In their view, the following opening sentence of Enoch is the first and oldest sentence written in any human language, since Enoch was the first to write letters: