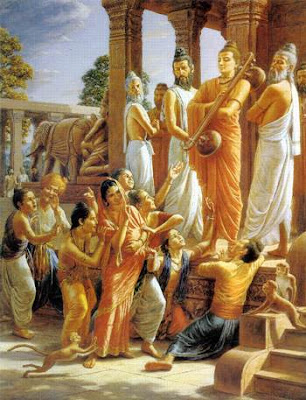 The Nephilim (plural) are the offspring of the "sons of God" and the "daughters of men" in Genesis 6:4, and/or giants who inhabit Canaan in Numbers 13:33. A similar word with different vowel-sounds is used in Ezekiel 32:27 to refer to dead Philistine warriors.

The term "Nephilim" occurs just twice in the Hebrew Bible, both in the Torah. The first is Genesis 6:1-4, immediately before the Noah's ark story:


1. When men began to increase in number on the earth and daughters were born to them,
2. the sons of God saw that the daughters of men were beautiful, and they married any of them they chose.
3. Then the LORD said, "My Spirit will not contend with man forever, for he is mortal; his days will be a hundred and twenty years."
4. The Nephilim were on the earth in those days—and also afterward—when the sons of God went to the daughters of men and had children by them. They were the heroes of old, men of renown.

The second is Numbers 13:32-33, where the Hebrew spies report that they have seen fearsome giants in Canaan:


32. And they spread among the Israelites a bad report about the land they had explored. They said, "The land we explored devours those living in it. All the people we saw there are of great size.
33. We saw the Nephilim there (the descendants of Anak come from the Nephilim). We seemed like grasshoppers in our own eyes, and we looked the same to them."

Genesis 6:4 describes the nephilim as "ancient warriors, the men of renown", and in Numbers 13:32-33 they are a race of giants native to Canaan. Both ideas are supported elsewhere in the Hebrew bible.

Ezekiel 32:27 speaks of "the fallen mighty (gibborim nophelim, גִּבֹּורִים נֹפְלִים) of the uncircumcised, which are gone down (yaradu, יָרְדֽוּ) to the grave with their weapons of war"; a change to the vowels would produce the reading gibborim nephilim.

In Amos 2:9, while not using the word "nephilim", Yahweh reminds the prophet that he "destroyed the Amorites before you, whose height was as the height of cedar trees". Genesis 6:4 says "the nephilim were on the earth in those days (before the Flood), and also after", and most later compositions and translations, including the Septuagint, therefore understand the nephilim to be giants.

Orthodox Judaism has always taken a consistent line against the idea that Genesis 6 refers to angels or that angels could intermarry with men. Shimon bar Yochai pronounced a curse on anyone teaching this idea. Rashi and Nachmanides followed this. Pseudo-Philo, Biblical Antiquities 3:1-3 may also imply that the "sons of God" were human. Consequently, most Jewish commentaries and translations describe the Nephilim as being from the offspring of "sons of nobles", rather than from "sons of God" or "sons of angels". This is also the rendering suggested in the Targum Onqelos, Symmachus and the Samaritan Targum which read "sons of the rulers", where Targum Neophyti reads "sons of the judges".

Likewise, a long-held view among Orthodox Christians is that the "sons of God" who fathered the Nephilim spoken of in the text, were in fact the formerly righteous descendants of Seth who rebelled, while the "daughters of men" were the unrighteous descendants of Cain, and the Nephilim the offspring of their union. This view dates to at least the 2nd century AD, with references throughout the Clementine literature, as well as in Sextus Julius Africanus, Ephrem the Syrian and others. Holders of this view have seen support in Jesus' statement that "in the days before the flood they (humans) were marrying and giving in marriage"

Some individuals and groups, including St. Augustine, John Chrysostom, and John Calvin, take the view of Genesis 6:2 that the "Angels" who fathered the Nephilim referred to certain human males from the lineage of Seth, who were called sons of God probably in reference to their being formerly in a covenantal relationship with Yahweh (cf. Deuteronomy 14:1; 32:5); according to these sources, these men had begun to pursue bodily interests, and so took wives of the daughters of men, e.g., those who were descended from Cain or from any people who did not worship God.

This also is the view of the Ethiopian Orthodox Church, supported by their own ancient Ge'ez manuscripts and Amharic translation of the Haile Selassie Bible - where the canonical books of 1 Enoch and Jubilees differ from newer western academic editions. The "Sons of Seth view" is also the view presented in a few extra-Biblical, yet ancient works, including Clementine literature, the 3rd century Cave of Treasures, and the ca. 6th Century Ge'ez work The Conflict of Adam and Eve with Satan. In these sources, these offspring of Seth were said to have disobeyed God, by breeding with the Cainites and producing wicked children "who were all unlike", thus angering God into bringing about the Deluge, as in the Conflict:


Certain wise men of old wrote concerning them, and say in their [sacred] books, that angels came down from heaven, and mingled with the daughters of Cain, who bare unto them these giants. But these [wise men] err in what they say. God forbid such a thing, that angels who are spirits, should be found committing sin with human beings. Never, that cannot be. And if such a thing were of the nature of angels, or Satans, that fell, they would not leave one woman on earth, undefiled... But many men say, that angels came down from heaven, and joined themselves to women, and had children by them. This cannot be true. But they were children of Seth, who were of the children of Adam, that dwelt on the mountain, high up, while they preserved their virginity, their innocence and their glory like angels; and were then called 'angels of God.' But when they transgressed and mingled with the children of Cain, and begat children, ill-informed men said, that angels had come down from heaven, and mingled with the daughters of men, who bare them giants.

Please for Christ sake help this poor boy from Haiti
I have made a blog at blogger.com Since i have added a google adsense in the blog but haven't made a penny with this. I need your help and support to help me make some money to PAY MY Tuition Fees.

What you have to do is follow these simple steps

Note:You MUST visit my blog from Google.com. Only ONE click is asked and nothing else
I will be very grateful to you.