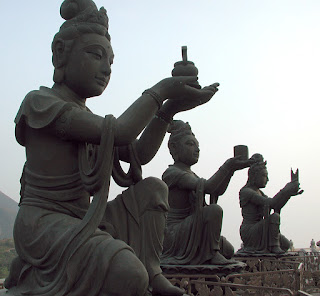 Tian (Chinese: 天; pinyin: tiān; Wade-Giles: t'ien; literally "heaven, heavens; god, gods") is one of the oldest Chinese terms for God and a keyword in Chinese mythology, philosophy, and religion. During the Shang Dynasty (17th-11th centuries BC) the Chinese called god Shangdi (上帝 "lord on high") or Di ("lord"), and during the Zhou Dynasty (11th-3rd centuries BC) Tian "heaven; god" became synonymous with Shangdi.

In the Chinese philosophical system of Daoism, Tian is often translated as "Heaven" and is mentioned in relationship to its complementary aspect of Di (地), which is most often translated as "Earth". These two aspects of Daoist cosmology are representative of the dualistic nature of Daoism. They are thought to maintain the two poles of the Three Realms of reality, with the middle realm occupied by Humanity (人 Ren).

For the etymology of tian, Schuessler (2007:495) says, "Because the deity Tiān came into prominence with the Zhou dynasty (a western state), a Central Asian origin has been suggested." He cites the Mongolian word tengri "sky, heaven, heavenly deity" or the Tibeto-Burman words Adi taleŋ and Lepcha tǎ-lyaŋ "sky". Schuessler (2007:211) also suggests a likely connection between Chinese tiān 天, diān 巔 "summit, mountaintop", and diān 顛 "summit, top of the head, forehead", which have cognates such as Naga tiŋ "sky".
at 12:01