A Vision of The Divine Goddess, Guan Yin 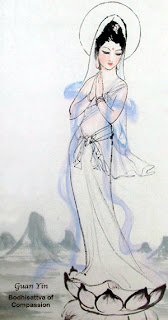 Legends of the Mahayana School of Buddhism recount that Kwan Yin was 'born' from a ray of white light which The Amitabha Buddha emitted from his right eye while he was deep in spiritual ecstasy.

Kwan Yin is regarded as an emanation of The Amitabha Buddha and as anembodiment of compassion, the quality which Amitabha himself embodies in the highest sense.

Many figures of Kwan Yin can be identified by the presence of a small image of Amitabha in her crown. It is believed that as the merciful Kwan Yin expresses Amitabha's compassion in a more direct and personal way and prayers to her are answered more quickly.

The paintings of Kwan Yin depict her in many forms, each one revealing a unique aspect of her merciful presence. As the sublime Goddess of Mercy whose beauty, grace and compassion have come to represent the ideal of womanhood in the East, she is frequently portrayed as a slender woman in flowing white robes who carries in her left hand a white lotus, symbol of purity. Ornaments may adorn her form, symbolizing her attainment as a bodhisattva, or she may be pictured without them as a sign of her great virtue.

Kwan Yin's presence is widespread through her images as the "bestower of children" which are found in homes and temples. She is one of the most beautiful of all the goddesses. She is often depicted seated upon a lotus or carrying a lotus.

Kwan Yin is also known as patron bodhisattva of P'u-t'o Shan, mistress of the Southern Sea and patroness of fishermen. As such she is shown crossing the sea seated or standing on a lotus or with her feet on the head of a dragon.

Like Avalokitesvara she is also depicted with a thousand arms and varying numbers of eyes, hands and heads, sometimes with an eye in the palm of each hand, and is commonly called "the thousand-arms, thousand-eyes" bodhisattva. In this form she represents the omnipresent mother, looking in all directions simultaneously, sensing the afflictions of humanity and extending her many arms to alleviate them with infinite expressions of her mercy.

Symbols characteristically associated with Kwan Yin are a willow branch, with which she sprinkles the divine nectar of life; a precious vase symbolizing the nectar of compassion and wisdom, the hallmarks of a bodhisattva; a dove, representing fecundity; a book or scroll of prayers which she holds in her hand, representing the dharma (teaching) of the Buddha or the sutra (Buddhist text) which Miao Shan is said to have constantly recited; and a rosary adorning her neck with which she calls upon the Buddhas for succor.

Today Kuan Yin is worshipped by Taoists as well as Mahayana Buddhists--especially in Taiwan, Japan, Korea and once again in her homeland of China, where the practice of Buddhism had been suppressed by the Communists during the Cultural Revolution (1966-69). She is the protectress of women, sailors, merchants, craftsmen, and those under criminal prosecution, and is invoked particularly by those desiring progeny. Beloved as a mother figure and divine mediatrix who is very close to the daily affairs of her devotees, Kwan Yin's role as Buddhist Madonna has been compared to that of Mary the mother of Jesus in the West.

The Goddess Kwan has great healing powers. Many believe that even the simple recitation of her name will bring her instantly to the scene. One of the most famous texts associated with the bodhisattva, the ancient Lotus Sutra whose twenty-fifth chapter, dedicated to Kwan Yin, is known as the "Kwan Yin sutra," describes thirteen cases of impending disaster--from shipwreck to fire, imprisonment, robbers, demons, fatal poisons and karmic woes--in which the devotee will be rescued if his thoughts dwell on the power of Kwan Yin. The text is recited many times daily by those who wish to receive the benefits it promises.

Devotees also invoke the bodhisattva's power and merciful intercession with the mantra OM MANI PADME HUM-- "Hail to the jewel in the lotus!" or, as it has also been interpreted, "Hail to Avalokitesvara, who is the jewel in the heart of the lotus of the devotee's heart!"

Throughout Tibet and Ladakh, Buddhists have inscribed OM MANI PADME HUM on flat prayer stones called "mani-stones" as votive offerings in praise of Avalokitesvara. Thousands of these stones have been used to build mani-walls that line the roads entering villages and monasteries.

It is believed that Kwan Yin frequently appears in the sky or on the waves to save those who call upon her when in danger. Personal stories can be heard in Taiwan, for instance, from those who report that during World War II when the United States bombed the Japanese-occupied Taiwan, she appeared in the sky as a young maiden, catching the bombs and covering them with her white garments so they would not explode.

Thus altars dedicated to the Goddess of Mercy are found everywhere--shops, restaurants, even taxicab dashboards. In the home she is worshipped with the traditional "pai pai," a prayer ritual using incense, as well as the use of prayer charts--sheets of paper designed with pictures of Kuan Yin, lotus flowers, or pagodas and outlined with hundreds of little circles.

With each set of prayers recited or sutras read in a novena for a relative, friend, or oneself, another circle is filled in. This chart has been described as a "Ship of Salvation" whereby departed souls are saved from the dangers of hell and the faithful safely conveyed to Amitabha's heaven.

She had numerous embodiments prior to her ascension thousands of years ago and has taken the vow of the bodhisattva to teach the unascended children of God how to balance their karma and fulfill their divine plan by loving service to life and the application of the violet flame through the science of the spoken Word.
at 10:54

I've just discovered this blog and it looks amazing.