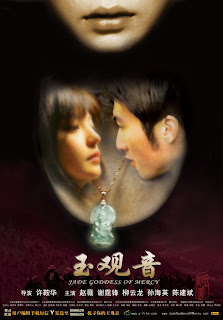 Like America 150 years ago, today’s China has sophisticated modern cities in the east and an untamed wild west where everyone seems to have a gun. Goddess of Mercy bounces between these two worlds, taking its indefatigable heroine An Xin (Vicky Zhao) on a journey with enough action, drama, and leading men to fill three movies. It’s an operatic eyeful that has won much acclaim in Asia but appears on these shores without a theatrical release. DVD may have to suffice.

We first meet An Xin mopping up in the Beijing tae kwan do school where she works. Described as a “bumpkin” by the city slickers who practice there, she catches the eye of man-about-town Yang Rui (Yulong Liu), a young playboy who has a brand new Jeep, a Vuitton-obsessed girlfriend, and lots of cologne in his bathroom. It’s love at first sight for Yang Rui, but An Xin brushes him aside saying she’s not interested and hinting that she has many dark secrets. When he persists she even kicks him in the face, but she can’t shake him, and soon she’s succumbing to his charms as he swears off his gallivanting lifestyle.

The jealous girlfriend, however, has hired a detective to track Yang Rui, and when his relationship with An Xin is revealed, she trumps up a corporate extortion charge against him, and he’s off to jail in an instant.

To find out about An Xin’s secret past, a flashback transports us out west to a provincial town where we discover that she’s actually a cop involved in a Colombian jungle-style war again ultraviolent drug traffickers who challenge the police in frequent shootouts. She’s also engaged to newspaper reporter Tienjun (Jianbin Chen), who hates her career choice but can’t wait to marry her anyway.

But then comes leading man number three, Mao Jie (Nicholas Tse), who also falls in love with An Xin and sweeps her off her feet while Tienjun is out of town. He doesn’t know she’s a cop, and she doesn’t know his family is in charge of the local drug trade, but it all becomes clear when the two meet each other on a ferryboat during an undercover sting. Oops. He’s arrested, his family is killed, and revenge is on the agenda. But she’s pregnant. With his baby. Oops again.

From this point the film rushes back toward the present with enough death, destruction, and tears to fill the stage of the Metropolitan Opera for days. No one is spared, and it becomes kind of funny that An Xin’s boyfriends have told her she looks like the goddess of mercy figure she wears on a necklace. She’s more like the goddess of incredibly bad luck, at least for the men who fall in love with her.

At the center of this wild storm is Vicky Zhao, who American audiences have seen in Shaolin Soccer and 2003’s high-tech girl-on-girl chopsocky fest So Close. She appears in virtually every scene and holds the film together. She’s one part Michelle Rodriguez (the girl can kick!) and one part Julianne Moore. In fact, it would be hard to pick any one American actress who could play the part were the film ever remade here.

Overplotted though it may be, Goddess of Mercy (Yu GuanYin) pulls you in and sweeps you along, especially when An Xin’s impossibly cute toddler son is put in danger (and by his own father, no less). The film ends with images of Buddhist pilgrims chanting as they hike up the side of a Tibetan mountain. You kind of want to go along.

The story of An Xin's jade Guan Yin pendant and Guan Yin are a strong part of this movie. It will make you want to get such a pendant for yourself.
at 23:35