DiYu: The Hell of Taoism, Buddhism, and Chinese Folk Religions 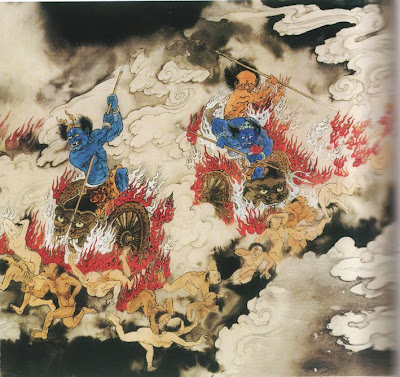 Diyu (simplified Chinese: 地狱; traditional Chinese: 地獄; pinyin: Dìyù; Wade-Giles: Ti-yü; literally "earth prison") is the realm of the dead or "hell" in Chinese mythology. It is based upon the Buddhist concept of Naraka combined with traditional Chinese afterlife beliefs and a variety of popular expansions and re-interpretations of these two traditions.

The upper level was ruled by Yanluo Wang, the King of Hell, Diyu is a maze of underground levels and chambers where souls are taken to atone for their earthly sins. The second level was ruled by king Chu Jiang and reserved for thieves and murderers.

Incorporating ideas from Taoism and Buddhism as well as traditional Chinese folk religion, Diyu is a kind of purgatory place which serves not only to punish but also to renew spirits ready for their next incarnation. There are many deities associated with the place, whose names and purposes are the subject of much conflicting information.

The exact number of levels in Chinese Hell - and their associated deities - differs according to the Buddhist or Taoist perception. Some speak of three to four 'Courts', other as many as ten. The ten judges are also known as the 10 Kings of Yama. Each Court deals with a different aspect of atonement. For example, murder is punished in one Court, adultery in another. According to some Chinese legends, there are eighteen levels in Hell. Punishment also varies according to belief, but most legends speak of highly imaginative chambers where wrong-doers are sawn in half, beheaded, thrown into pits of filth or forced to climb trees adorned with sharp blades.

However, most legends agree that once a soul (usually referred to as a 'ghost') has atoned for their deeds and repented, he or she is given the Drink of Forgetfulness by Meng Po and sent back into the world to be reborn, possibly as an animal or a poor or sick person, for further punishment. One description of Diyu can be found in the Jade Record.

Some early cultures in China thought people went to Mount Tai, Jiuyuan (九原) or Jiuquan (九泉), or Fengdu after death.

There are many hells with different punishments in Buddhist and Taoist books. Some controversial folk religion planchette writings such as Journeys to the Under-World

said there are hells with new punishments as the world is changing. The Hell is made up of ten courts, each ruled by one of the 10 Yama Kings and 18 levels in which wrongdoers are punished. The relative time of the hells may be different.

The concept of '18 levels of hell' started in the Tang Dynasty. The Buddhist text Wen Di Yu Jing (問地獄經) mentioned 134 worlds of hell, but was simplified to 18 levels of hell for convenience.


There are folk variants of the 18 hells in full chart of the sea and land and Feng Du. Some religious or literature books said wrongdoers not being punished when alive being punished in the hells.

Among the more common names for the Underworld are (from most common to least common):
And terminologies related to hell: