Tibet Is No Shangri-La and the Dalai Lama is not what you think. 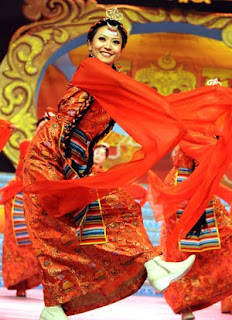 In the popular imagination, Tibet is a land of snow-capped mountains and sweeping vistas, fluttering prayer flags, crystal blue skies, saffron-robed monks spinning prayer wheels, and, perhaps most of all, timelessness. And likewise, the Dalai Lama, the spiritual leader of Tibet and its chief emissary to the West, is a man of abiding wisdom and compassion, an inspiration and moral compass, a beacon of calm in a frenetic modern world. Set aside the fraught politics of this contested region. If one word sums up what Tibet means to the West it is this: purity.

, a fictional account of excursions among lamaseries in the Himalayas, where the protagonist encounters a people who are forever happy, mystically content, slow to age, and isolated from most ills that trouble the human race. Author James Hilton (whose other notable work is Goodbye, Mr. Chips

," a monastery nestled in a misty mountain valley; its name has since become synonymous with earthly paradise.

Tibet's enduring hold on Western minds -- together with the energetic, globe-trotting advocacy of the Dalai Lama -- helps explain why the concerns of the region's minority population are so familiar to so many so far away. (By comparison, it took violence in the streets of Urumqi to awaken foreign readers to the agitation of another of China's minority groups, the Uighurs.) In the Washington, D.C., neighborhood where I live, more than a few homes have decorative Tibetan prayer flags strung sentimentally across balconies and backyard porches. Next week, U.S. President Barack Obama is expected to meet with the Dalai Lama in the Oval Office -- over the inevitable protests of Chinese authorities.

Besides being the spiritual leader of Tibet, the Dalai Lama is also the author of dozens of religious and self-help books, from The Art of Happiness

to The Universe in a Single Atom

, published in multiple languages; he drops in to visit political leaders in European capitals and entertainment moguls in Los Angeles. He has received the Nobel Peace Prize and twice been named to Time magazine's list of the "100 Most Influential People.

" The first in his lineage to ever travel to the West, the Dalai Lama has managed to build an impressive multinational media and public relations. (Such is his fame and prestige that some recent awards to His Holiness appear motivated largely to bring good publicity to the donor; the town of Wroclaw, Poland, offered the Dalai Lama honorary citizenship in 2008; Memphis, Tennessee, extended a similar offer last September.)

But how much do Westerners really know about the Dalai Lama? His advocacy of an ethos of compassion and environmental protection are popular among his largely left-leaning Western admirers, while his more socially conservative views tend to be either unknown, or selectively ignored. (Christopher Hitchens is one of the few to have taken exception.) He is basically anti-abortion (except in rare circumstances) and ambivalent about homosexuality; his 1996 book, Beyond Dogma

, was strikingly explicit in its sexual prohibitions: "A sexual act is deemed proper when the couples use the organs intended for sexual intercourse and nothing else." In recent years, his remarks on the subject have somewhat softened: he told an audience in San Francisco that while Buddhist teachings historically discourage gay relationships, such prohibitions only apply to Buddhists. (He has also written, rather confusingly, "Homosexuality, whether it is between men or between women, is not improper in itself. What is improper is the use of organs already defined as inappropriate for sexual contact.")

As for Tibet itself, it's no Shangri-la.

That is to say, there was no real place named Shangri-la until recently, when the city of Zhongdian (Gyalthang in Tibetan) changed its name to recall Hilton's paradise. In truth, the modern city is not quite a dreamscape. Situated on an alpine plateau, in a location resembling that of Lost Horizon

, the modern city of 130,000 is divided into an "old" and "new" town. The new town came first. It resembles many midsize Chinese cities that have arisen in recent decades, with hastily erected concrete apartment blocks and glass storefronts. The old town, however, was built entirely in the last decade years; it has "quaint" cobbled streets and wooden storefronts, and when I visited last fall, I stayed in a rustic lodge, with a wood-burning stove and a sloppy dog who slept on the steps. All this is pleasant fabrication for tourists like myself, catering to what we expect to find.

Shangri-la isn't even in Tibet proper; it's situated in the far north of China's Yunnan province. (The region where Tibetans live actually spans parts of five Chinese provinces, and is known as "greater Tibet .") Han Chinese tourists from the country's wealthy eastern cities, who now are becoming more curious about Tibetan lands and culture, also come here to take in the view. They roll in on large tour buses and stay in luxury hotels in the new town, with banquet halls and karaoke bars. Chinese tourists generally spend little time in Shangri-la and instead book guided day trips to take in the dramatic scenery. Western tourists stay in old-town lodges, and stock their backpacks and suitcases with hand-sewn Tibetan coats, jade jewelry, prayer wheels and other trinkets, and profess more interest in the Tibetan people.

Tibetans, for their part, have discovered that there is money to be made from the outside world's interest in them. That is to say, they are more worldly than we typically give them credit for. In Shangrai-la, some of the most enterprising and entrepreneurial Tibetans can be found running tour shops that cater, alternately, to both Western and Chinese expectations. When I visited the Ganden Sumtseling Monastery

just outside of town, there was, improbably, a large construction site in the center of the grounds, with cranes erecting new facilities for the recent surge in tourism.

It is dangerous to generalize from chance encounters, but the young Tibetans I met there were less ethereal, and more down-to-earth, than our mythology suggests. Near the central square in "old" Shangri-la, a 21-year-old Tibetan named Tashi was sitting on the steps outside a travel agency, waving a cigarette. "It's bad for my health, but it looks sexy," he said. Tashi was wearing a black Adidas jacket, tight jeans, and had short spiky gelled hair. He told me he fancies himself a discerning connoisseur of global sexiness from the many American movies he's watched. He was also, he mentioned, distraught about Michael Jackson's death, and, cigarette in hand, showed off his version of the moonwalk. At night, he and his friends hung out playing chess and drinking coffee and beer at new bars downtown.

Judging by appearances, the new generation of Tibetans seems, in a superficial sense, rather un-Tibetan. But that, too, is an oversimplification, as it became clear from talking to Tashi that he certainly thinks differently than Han Chinese his age. For one, he expressed little interest in Deng Xiaoping

's famous invocation "to get rich is glorious," which is very nearly the closest thing there is to a unifying Chinese dream. For another, he told me that he and his family members continue to consult their lama, the equivalent of a priest in Tibetan Buddhism, about major life decisions. Recently that meant seeking the lama's spiritual appraisal of whether Tashi's sister should marry a pair of brothers then wooing her (Tibetan custom permits polygamy in certain circumstances involving siblings).

Many versions of Buddhism are practiced in China, some with tacit consent of the authorities, but Tibetan Buddhism has proved particularly difficult to integrate because, as with the Islam practiced by Uighurs, it invests authority in local religious leaders who rival the authority of local officials. On issues ranging from property rights to marriage customs, sparks may fly.

Tashi invited me to a Tibetan wedding reception, held in a modest banquet room in downtown Shangri-la, the wooden tables cluttered with bottles of hard liquor, 3-liter Coke bottles, six-packs of "Dali" beer (Dali is another city in northern Yunnan province), sunflower seeds, and trays of dumplings. The guests, mostly in their 20s, sat in plastic chairs laughing and smoking. The bride was wearing a traditional Tibetan costume, with her face painted and hair plaited. The others wore jeans, leather jackets, or hooded sweatshirts.

Everyone identified themselves as "Tibetan," although they hailed from different provinces in greater Tibet. The groom was from Qinghai; the bride was from Yunnan. They teased the handful of guests from Lhasa, the capital of Tibet proper, for being city slickers. The stereotype, among Tibetans, is that Lhasans are more educated, glamorous, and somewhat deceptive, while those from Yunnan, whose families came there as soldiers, are supposed to be straighter-shooters.

The political and territorial stakes are serious, and not likely to be resolved anytime soon. But there is also a gauziness with which the region and the man who represents it to the West are most often discussed. Even in the fast-paced and cynical 21st century, talk of Tibet still elicits a 19th century aura of romanticism and melancholy. In general, sentiment veils critical thinking. In the case of Tibet, our collective nostalgia, inexplicably, for a place most of us have never seen lends itself to a striking absolutism with which we discuss the place, its people, its present condition, its future destiny. While most things in life are murky and grey, the Tibet of our imagination is pristine, and the lines between good and evil are as clear as a mountain stream.

The reality is somewhat hazier, on all accounts.
at 00:26