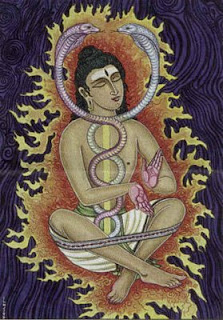 Pranayama (Sanskrit: प्राणायाम prāṇāyāma) is a Sanskrit word meaning "restraint of the prana or breath". The word is composed of two Sanskrit words, Prāna, life force, or vital energy, particularly, the breath, and "āyāma", to suspend or restrain. It is often translated as control of the life force (prana).  When used as a technical term in yoga, it is often translated more specifically as "breath control". Literal translations include A. A. Macdonell's "suspension of breath" and I. K. Taimni's "regulation of breath".

Some scholars distinguish between hatha and raja yoga varieties of pranayama, with the former variety usually prescribed for the beginner. According to Taimni, hatha yogic pranayama involves manipulation of pranic currents through breath regulation for bringing about the control of chitta-vrittis and changes in consciousness, whereas raja yogic pranayama involves the control of chitta-vrittis by consciousness directly through the will of the mind. Students qualified to practice pranayama are therefore always initiated first in the techniques of hatha pranayama.

Pranayama is mentioned in verse 4.29 of the Bhagavat Gita

Yoga works primarily with the energy in the body, through the science of pranayama, or energy-control. Prana means also ‘breath.’ Yoga teaches how, through breath-control, to still the mind and attain higher states of awareness. The higher teachings of yoga take one beyond techniques, and show the yogi, or yoga practitioner, how to direct his concentration in such a way as not only to harmonize human with divine consciousness, but to merge his consciousness in the Infinite.

Pranayama is the fourth 'limb' of the eight limbs of Raja Yoga mentioned in verse 2.29 in the The Yoga Sutras of Patanjali

. Patanjali discusses his specific approach to pranayama in verses 2.49 through 2.51, and devotes verses 2.52 and 2.53 to explaining the benefits of the practice. Patanjali does not fully elucidate the nature of prana, and the theory and practice of pranayama seem to have undergone significant development after him. He presents pranayama as essentially an exercise that is preliminary to concentration, as do the earlier Buddhist texts.

Many yoga teachers advise that pranayama should be part of an overall practice that includes the other limbs of Patanjali's Raja Yoga teachings, especially Yama, Niyama, and Asana.

According to the Pali Buddhist Canon

, the Buddha prior to his enlightenment practiced a meditative technique which involved pressing the palate with the tongue and forcibly attempting to restrain the breath. This is described as both extremely painful and not conducive to enlightenment. According to the Buddhist scheme, breathing stops with the fourth jhana, though this is a side-effect of the technique and does not come about as the result of purposeful effort.

. Its use there is preparation for concentration. According to commentarial literature, this is appropriate for beginners.

For the Buddha, the most important aspect of breath meditation is the consciousness attending to the breath. Buddhist tradition in general has urged moderation in the area of manipulation of the breath.