The Olympic Highway to Heaven: All Faiths Represented, Living in Peace 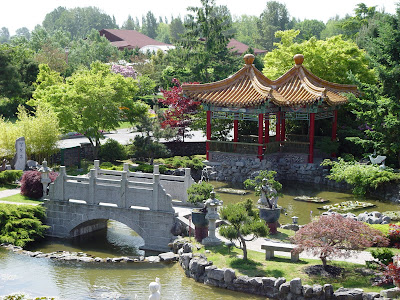 From modern Asian malls to the ‘Highway to Heaven’ with its churches, mosques, temples and historical landmarks, British Columbia’s Metro-Vancouver’s suburb city of Richmond, the only Canadian city surrounded by dykes, is a place worth visiting. Emitting the sounds ands aromas of the mysterious Orient as well as a religious aura and structures oozing stories from the past, the city of 188,000 is made up from 17 islands, half of which are still farmland, has much to lure the wayfarer.

Our tour group walked on Moncton Street in the town’s heritage area, where once 70 salons did a roaring business, before leaving for the Highway to Heaven experience. The heart of this ‘highway’ is Richmond’s No.5 Road, filled with numerous religious structures, their congregations practising their rites in the over 20 temples, mosques and churches. Of course our tour only covered a few of these houses of worship but they are a sample of what Richmond has to offer for those seeking the Highway to Heaven.

Our first was Jama’i Mosque, a Sunni Muslim house of worship with a plain exterior and interior, which can hold up to 700 worshippers. It was prayer time and the keeper of the mosque brought us chairs so that we could sit and watch the congregation at prayer. After prayer the Imam gave us a talk outlining the tenants of Islam, emphasizing how much women were respected in Islam. Other members of the congregation began to take part in the discussion trying to convey the message that Islam was a peaceful and tolerant religion.

Our next stop was at Gurdwara Gursikh Temple, where a woman guide in the Temple gave both the men and women scarves to cover our heads before we toured the building. In contrast to the mosque it was an ornate structure with pictures of the revered leaders of Sikhism, which derives much of its teachings from Hinduism and Islam.

We then sat down to lunch, offered by the ‘Temple’, free to all visitors. It was a fine tasty vegetarian Indian meal. As we ate the delicious food our guide talked about the history of Sikhism and its teachings, emphasizing somewhat the bravery and warrior aspect of the sect.

Leaving the Temple of Sikhism, we next made our way to the nearby Ling Yen Mountain Temple, a Buddhist monastery built in the Chinese palatial style. The temple has several dozen resident monks and nuns and some 10,000 members in Metro-Vancouver, many who are new converts to Buddhism. It is a splendid house of worship, colourfully decorated with lanterns, religious icons and statues. Our guide, Wei Shin, the Buddhist name of a Canadian convert to Buddhism said that like thousands of other Canadians who had converted to Buddhism life now made sense – he had found the essence of life in his new religion. Like other converts to a new religion, he oozed with enthusiasm when he talked about Buddhism.

We ended our tour at the International Buddhist Temple, a short distance from the Highway to Heaven, the first and largest authentic Chinese Buddhist temple, built in the exquisite traditional Chinese architecture style in North America. A magnificent temple, it houses the largest Buddha statue in North America and offers four grand halls, a serene classical Chinese garden with its gazebos, wisdom fountain, lotus ponds and dragon fountains.

Being revered by his followers in different ways, many statues of Buddha appear in various forms such as a sad Buddha, a smiling Buddha and a wise Buddha found in both inside and outside of the Temple. Buddha has stood the test of centuries and here on Canada’s western shores he is taking more followers on the Highway to Heaven. In the words of a woman in our group, “It seems to me that Buddhism and all other religions are on the Highway to Heaven. It’s great as long as they don’t push the others to the roadside.”

There are a good many other houses of worship in Richmond (such as Taoist temples, Christian parishes, and Jewish synagogues), Canada’s Oriental capital whose population is 65% Asiatic origin, their Oriental shopping malls concentrated in a section of town called the ‘Golden Village’ – a name that lured Asian immigrants, thinking the name would bring them affluence. These malls carry goods from Japan and Korea, but the vast majority of products for sale are Chinese, originating from mainland China and Taiwan, as well as a sprinkling of goods from other countries in the Far East.

One’s visit to Richmond would be short-changed if the Golden Village is omitted from an exploration of the city. Full of the sights, smells, sounds and tastes of the Orient, the malls with their bakeries, cafes, restaurants and shops, constitute the core of the ‘Village’.

Within a four-block area one can find some 600 shops, the vast majority carrying the exotic products of the East, art galleries, jewellery outlets, teashops and the latest fashions and technical inventions, as well as eating-places, hotels and karaoke bars. It is a unique Asiatic world, only a few minutes from the Highway to Heaven.
Our journey on the Highway to Heaven that day was only a bare sampling of the many stops on this heavenly path. Perhaps even the drinkers in the 70 salons of the past if they came to life today will be redeemed should they take this Highway to Heaven. It is Canada’s contribution to multiculturalism in this world and the next.

is located in Richmond. A taxi from the Airport costs from $10.00 to $20.00 to any place in Richmond, but if you are staying at a hotel in Richmond, most have FREE airport shuttles.

The Golden Village is located in the City of Richmond, bordered by Sea Island Way, Garden City Road, Alderbridge Way and No. 3 Road. It is five minutes from the Vancouver International Airport – three bridges connect the airport area almost directly to the Golden Village

Visitors to the Golden Village have countless choices in restaurants, food courts and other types of eating-places – it’s an Asiatic gourmet world, featuring the top dishes eaten in the Orient. Some travellers say that the best Chinese food in the world is to be found in the Golden Village in Richmond. It is said that the food at the Village’s restaurants is balanced in seasoning and appealing to the palate in flavour and quality and that it overshadows the same dishes prepared in Asia.
at 12:25