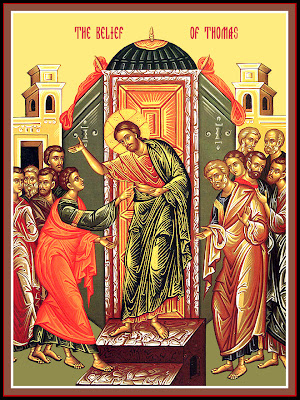 The term Octave of Easter may refer either to the eight day period (Octave) from Easter Sunday until the Sunday following Easter, inclusive; or it may refer only to that Sunday after Easter, the Octave Day of Easter (sometimes known as Low Sunday). That Sunday is also known historically as St. Thomas Sunday (especially among Eastern Christians) and Quasimodo Sunday. Since 1970 Low Sunday has been officially known as the Second Sunday of Easter (referring to the Easter season) in the Roman Catholic Church.

The name Quasimodo came from the Latin text of the traditional Introit for this day, which begins "Quasi modo geniti infantes..." ("As newborn babies...", from 1 Peter 2:2). Literally, quasi modo means "as if in [this] manner".

St. Thomas Sunday is so called because the Gospel reading always relates the story of "Doubting Thomas," in which Thomas the Apostle comes to believe in the Resurrection of Jesus only after being told by the resurrected Christ to place his finger in the nail marks and his hand in His side. In the Gospel accounts, this event takes place on the eighth day after the Resurrection, hence their significance for this Sunday (John 20:19-29).

Traditionally, the newly-baptised would receive baptismal gowns that would be worn until this day, and the official Latin name is Dominica in Albis [Depositis], "Sunday in [Setting Aside the] White Garments". Hence "White" and "Alb" Sunday—which is also the etymology of Whitsunday (Pentecost).

In the Eastern Orthodox, Coptic Orthodox and certain Eastern Catholic churches, the first Sunday after Pascha (Easter) is known as Thomas Sunday, after the Gospel passage read that day (John 20:19-31) which recounts the story of Christ appearing to the Apostle Thomas in order to dispel his doubt about the Resurrection. Among Eastern Christians Thomas is not so much remembered as "doubting Thomas," but is rather remembered for his confession of faith: "My Lord and my God," thus being the first to publicly proclaim the two natures of Christ: human and divine.

The entire week from Pascha to Thomas Sunday, known as Bright Week or Renewal Week, is considered to be one continuous day. The hymns chanted every day are identical to those chanted on the Sunday of Pascha, with the exception of a few parts that are taken from the Octoechos (the "Book of the Eight Tones"). Each day has a different tone: Easter Sunday is Tone One, Bright Monday is Tone Two, and so on through the eight tones (skipping Tone Seven, the "Grave Tone"). On Bright Friday, in addition to the normal Paschal hymns, special stichera and a canon in honor of the Theotokos (Mother of God) are chanted in commemoration of her Icon of the "Life-giving Spring." During all of Bright Week the Royal Doors on the Iconostasis are kept open—the only time of the year when this occurs. The doors are closed before the Ninth Hour on the eve of Thomas Sunday. However, the Afterfeast of Pascha will continue until the eve of the Ascension.

Thomas Sunday is also called Antipascha (literally, "in the place of Pascha") because those who for honorable reason were not able to attend the Paschal Vigil, may attend services on this day instead. Pascha is a unique feast in the church year; being the "Feast of Feasts" it follows a format unlike any other day. Those liturgical elements normal to a Great Feast of the Lord which were displaced by Pascha's unique elements are instead chanted on Thomas Sunday.

All Sundays of the year are determined by the date of Pascha. Thomas Sunday is the first Sunday of the liturgical year that takes its character and naming from the current Pascha (all earlier Sundays having depended on the previous Pascha).