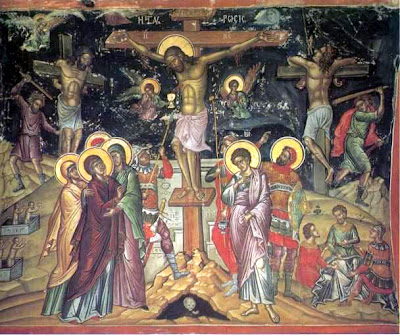 The Holy Sepulchre is more than just a large, ancient church, but is a holy site for Orthodox and Catholic Christians divided into many smaller chapels dedicated to different parts of the Easter story.

Also known as the Church of the Resurrection, the cavernous church commemorates the hill of crucifixion and the tomb of Christ's burial. It sits on the edge of the Christian Quarter in the Old City and is home to several Christian denominations: Greek Orthodox, the Armenian Orthodox and the (Latin) Roman Catholic are the larger denominations while the Egyptian Coptic Orthodox, the Ethiopian Orthodox and the Syrian Orthodox also possess rights and properties in the building.

Originally built by Constantine’s mother in 330 A.D. on top of a pagan worship site, inside the church many first-century tombs hewn from rock were discovered there, one identified as that of Saint Joseph of Arimathea, used for the body of Jesus after his resurrection.

The Church of the Holy Sepulcher has weathered many attacks during various periods of history in the Holy Land. Most of the present building is the result of 12th-century reconstruction by the crusaders. Since 1520, the keys of the church have been kept by a Muslim family rather than one of the Christian groups.

Because many denominations share the building, disputes often arise regarding the space. One is the continuing dispute between the Coptic and Ethiopian Orthodox concerning ownership rights in the Chapel of the Ethiopians, located on the roof of the Chapel of St. Helena.

The following is a description of the chapels and significant locations within the church, memorializing the death and resurrection of Christ.

The Tomb of Jesus
The tomb, also known as the edicule, is at the center of the Holy Sepulchre Church, and symbolically sits under the largest dome in the church. The tomb is used in turn by all of the denominations for daily mass. A rectangular, tall structure built of red granite and adorned with candlesticks outside the door, the edicule houses two small rooms - the Chapel of The Angel and the tomb itself. The Chapel of the Angel contains a stone, which represents part of the larger stone that was rolled away from Christ's tomb on the day of the resurrection, according to tradition. On this stone is an imprint of a hand believed to be that of one of the angels who waited in tomb to announce the resurrection. A Greek monk is always present in this room to guard the Tomb of Christ. The Chapel of the Holy Sepulchre contains the Tomb of Christ, the 14th Station of the Cross and the holiest site in Christendom. A marble slab lies in the place where Jesus was laid.

Stone of Anointing
Upon entering the Holy Sepulchre from the spacious courtyard, the Stone of the Anointing or Unction, lies just beyond the iron doors. Tradition has it that this is the spot where Jesus’ body was prepared for burial by St. Joseph of Arimathea. Jesus was anointed and wrapped in a clean linen cloth according to the Jewish tradition of those days. The limestone slab dates to 1808 replacing the one destroyed in the 12th century. Opulent lamps hang above the stone. Many pilgrims stop here first to kiss the stone before moving on to the rest of the church.

Golgotha (or Calvary)
To the right of the stone is a staircase that leads to two chapels on the tip of Golgotha, where Jesus was nailed to the cross. The first room is a Catholic Franciscan Chapel with an altar dedicated to the Nailing of the Cross (Station 11 of the Via Dolorosa). The Greek Orthodox Calvary is the second room, with the actual Rock of Golgotha (Station 12 of the Via Dolorosa) that can be seen through glass. Pilgrims may touch the rock through a small opening in the glass.

The Chapel of St. Mary Magdalene
This Franciscan chapel, to the north of the tomb, is believed to the where Mary Magdalene watched Jesus’ burial, as recounted in Mark 15:47, and also encountered Jesus after his resurrection. This is the Roman Catholic area of the church.

The Prison of Christ
This small area is believed to be where Jesus was temporarily held with the two thieves before he was crucified.

The Chapel of the Division of the Robe
The Armenian chapel is the location at which it is believed the soldiers cast lots for Jesus’ robe according to John 19:24.

The Chapel of St. Longinus
The Greek chapel is dedicated to Longinus, the Roman soldier who led the group of soldiers that escorted Jesus to Golgotha. According to Matthew 27:54, after the crucifixion the Roman centurion acknowledged that Jesus was the Son of God.

The Chapel of the Crowning of the Thorns
This Greek Orthodox chapel is located at the base of Golgotha and, as the name suggests, memorializes the abuse Jesus suffered at the hands of the Roman soldiers. According to John 19:2, the soldiers mocked Jesus and put on him a purple robe and crown of thorns. A small fragment of the column from the Prison of Christ is in this chapel.

The Catholicon
The main chapel facing the Tomb of Christ is a large rectangular area with a dome and is considered the “naval of the world” - the spiritual center of the earth (Ezekiel 38:12). Two thrones are on the altar, one for the Orthodox Patriarch of Antioch and the other for the Orthodox Patriarch of Jerusalem. The ornate chapel is a large area used by the Greek Orthodox.

The Chapel of St. Helena/Chapel of St. Gregory
The Greeks consider this Helena’s Chapel while the Armenians call it the Chapel of St. Gregory. Located at the base of the stairs near the Crowning of the Thorns, there is a throne and an original mosaic from the church which has been preserved. Along the stairway small crosses carved by medieval pilgrims are etched into the wall. The chapel has two apses, one dedicated to the repentant thief and the other to St. Helena, mother of Constantine who searched for the true cross, according to tradition.

The Chapel of St. Vartan
This Armenian chapel, not often open to the public, is adjacent to St. Helena’s Chapel and was only discovered in the 1970s. Remnants of the wall date back to the 2nd century and one is etched with a merchant ship and an inscription which translates "Lord, we shall go."

The Chapel of the Finding of the Cross
According to holy tradition, St. Helen discovered Jesus’ cross here in 330 AD. She found three crosses - one for Jesus and the two thieves crucified with him. She brought a sick man to touch each cross and determined that the one at which the man was healed was the cross of Christ.

The Coptic Chapel
Located on the other side of the tomb, the small chapel has its own separate entrance.

The Syrian Chapel
For the Syrian Orthodox Christians, this chapel on the east end of the church was used for burials in Jesus’ time.